Commissioner Jon Barber pleads no contest to copier use charge 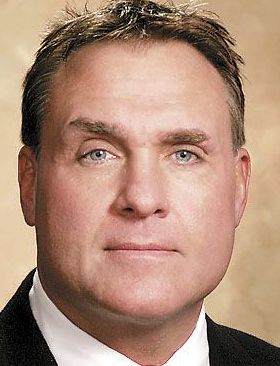 Rowan County Commissioner Jon Barber pleaded no contest Wednesday to charges he used the county’s copier and supplies to produce thousands of personal documents. But Barber still maintains he did nothing wrong.
Following a short hearing, Barber was given a 45-day suspended sentence for the misdemeanor larceny charge. The sentence also includes $800 restitution, a $500 fine and 36 hours of community service that he must complete within 90 days.
Barber stood in court flanked by his two attorneys, Todd Paris and Pete Hoffman. He said very little during the court proceedings, only answering questions from visiting Judge Brent Cloninger of Cabarrus County.
According to statements read in court, Barber was accused of printing 1,000 documents in 2012 that were not related to county business. He denies it.
He was confronted in 2013 about making copies, but did not stop, said Scott Harkey, a prosecutor with the N.C. Conference of District Attorneys Financial Crimes Initiative.
In September 2013, he continued large scale print jobs, Harkey added.
All together, officials estimated Barber used 6,000-10,000 pieces of paper. The value of the paper and ink was $800.
Commissioners voted in December to send the findings of an internal investigation to Rowan County District Attorney Brandy Cook.
In December, Cook told the Post her office made the decision to hand the case against Barber over to the N.C. Conference of District Attorneys Financial Crimes Initiative.
Prior to sentencing, Judge Cloninger asked Barber the last time he’d consumed impairing substances, to which Barber answered “years.”
In October 2011, Barber was convicted of stealing a $2.99 bottle of wine from a convenience store cooler earlier that year and drinking it in the store’s restroom.
In August 2011, Barber pleaded guilty to driving while impaired in connection with a May 2011 accident on Graham Road. During that incident, Barber crashed his vehicle into a ditch.
He was convicted in 2008 of driving while impaired after a Rowan County Sheriff’s Office deputy found the county commissioner passed out in his car at the corner of Sherrills Ford and Long Branch roads. His blood alcohol content was later determined to be .18, more than double the legal .08 limit. He received probation for both DWI convictions.
He admitted in May 2010 to a problem with alcohol after resigning from his teaching job amid allegations he was drunk in a classroom full of students.
The judge scolded Barber at the close of the hearing, telling him he was “entrusted by the people of this county” and holds a position that should be held to a higher standard.
“I don’t know what possessed you to do this,” Cloninger said.
He said Barber’s actions violated the people’s trust.
“You are an elected official. People count on you,” the judge said.
“I understand that,” Barber said.
Barber walked past waiting media following Wednesday’s court hearing without a word, but sent a prepared statement via friend James Kirks. Barber and Kirks left the courthouse, and Kirks returned with the press release.
Barber said he entered an Alford plea because he decided along with his wife and family it was the best decision.
An Alford plea is one in which the defendant does not admit the act, but acknowledges prosecutors could likely obtain a conviction at trial.
“My family and I did not want to endure the continued stress if this case continued and was taken to trial. Currently, this case has stretched over the past 20 months and it would have continued for many months to come if I had chosen to stand trial,” Barber said in the statement.
Barber said the copies he made were for a presentation from a webinar that the county paid for concerning health issues and policies, a fundraiser for a nonprofit that serves homeless veterans and documents concerning outstanding public records requests.
He said when he was questioned about the alleged unauthorized, excessive use of county equipment, he wrote a check to pay for copies the county deemed unnecessary and unrelated to his position as a commissioner.
The check was given to the County Manager Gary Page on two occasions and the payment was declined on behalf of commissioners Chairman Jim Sides, according to Barber.
In the statement, Barber said that during his time as commissioner, “I have strived to serve and represent all Rowan County citizens and businesses. As a county commissioner I have been a champion of no-kill shelters, food advocacy, improving the health and nutrition of all Rowan County citizens, providing prescription and dental discounts to citizens in Rowan County who are without health insurance or low income, and have advocated for nutritional meals in our public schools.”
He said he’s found during is last four years he’s more successful serving the county as a private citizen. Barber’s term ends later this year, and he is not seeking re-election.
Barber said he will resume roles within the community that allow him to continue to serve the county.
He thanked those who offered words of encouragement and support and to those who spoke up on his behalf “because they know my character, accomplishments and vision for Rowan County.”
All other questions were referred to his attorney, Todd Paris. Paris did not return repeated calls on Wednesday.
Contact reporter Shavonne Potts at 704-797-4253.