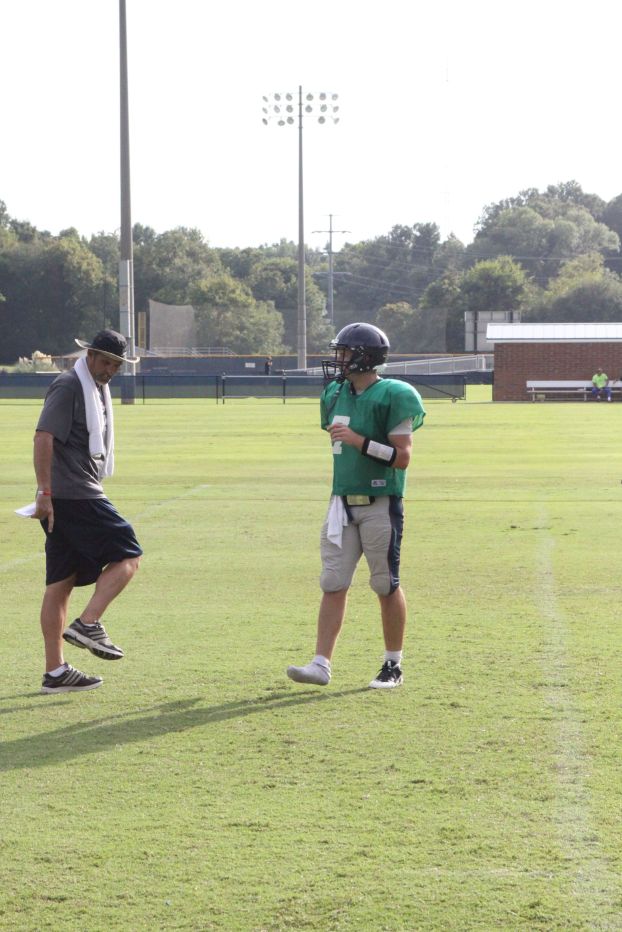 SALISBURY — Catawba’s new starting quarterback Mike Sheehan has gotten used to people talking about how smart he is before they get around to mentioning that he’s a pretty good football player.
He shrugs. Nothing he can do about it.
“My mom is a schoolteacher — sixth grade,” Sheehan said. “I guess that’s where it started. Education was always stressed.”
Ask offensive coordinator Kevin Brown about Sheehan, and he talks about the quarterback’s intelligence.
“I think he made a B-plus one time, but it’s been all A’s other than that,” Brown said with a laugh.
Ask head coach Curtis Walker about Sheehan and you get more of the same.
“The smartest football player I’ve ever been associated with, and I’ve been associated with a lot of guys over the years,” he said. “And I’m not talking about classroom-smart. I’m talking football knowledge.”
Sheehan was named a junior marshal academically before he was named this season’s starting quarterback. In terms of football eligibility, he’s still a sophomore because he redshirted the 2012 season,
While Catawba fans may be thrilled that Sheehan’s GPA is a few inches from 4.0, they are a lot more concerned about whether he can throw and run and get the inches needed for first downs.
There’s evidence that he runs and throws as well as he thinks. That’s not just because he’s performed admirably in the last two spring games.
When Danny O’Brien was banged up late in the 2013 season, Sheehan stepped into the starting role against Lenoir-Rhyne. While Catawba lost, Sheehan wasn’t overwhelmed. He threw for 175 yards and rushed for 61 and didn’t look out of place against the eventual Division-II national runner-up and a team with one of the best defenses in that classification.
That game and the game against North Greenville that he pulled out of the fire will help him moving forward. Actually, all of last season will help him. He spent 2013 learning from O’Brien, who transferred to Catawba after stints at Maryland and Wisconsin. Sheehan also had the benefit of an extra year to soak up knowledge from Brown, an excellent Catawba quarterback in his playing days.
“It was kind of touch and go before last summer because we weren’t sure who was going to start at quarterback,” Sheehan said. “Then Danny came in, and that took all the pressure off me because obviously he was going to be playing. But Danny’s year here helped me a lot. I’m a lot more ready to play now than I would’ve been a year ago.”
Brown agrees with that assessment.
“That extra year made a difference for him,” Brown said.
While he waited for his chance to be the starting quarterback, Sheehan was a valuable member of Catawba’s special teams on punt and kickoff coverage. That says something about how good an athlete Sheehan is.
“I’m sure people thought we were crazy to have the backup quarterback on special teams where he could get hurt,” Walker said. “But we needed Mike on the field.”
Sheehan arrived at Catawba from Wilmington Laney High without fanfare. No trumpets blew. No parties were thrown, No banners welcomed him as the designated quarterback of the future.
Still, he was impressive on a string of high school teams that were good but not dominant. He threw for 6,660 yards in a three-year career and tossed 56 touchdown passes. There was a 436-yard passing game against Lumberton and a 455-yard, six-TD outing against West Brunswick.
Sheehan has been a quarterback a long time and understands the position gets too much credit for wins and too much blame for losses. He knows when Catawba opens at Davidson on Saturday at 7 p.m. that his job will be like that of a baseball starting pitcher. He just has to give his team a chance to win the game.
“Our offensive line was together the last nine games last season and this whole preseason, and that’s going to help me a lot,” Sheehan said. “As a team, we’re much deeper and more talented than we’ve been since I got here.”
Sheehan is remarkably calm ahead of his first start, like a student knowing they’re going to ace a test. He’s a smart guy.
That, however, does not mean he is not a good football player.
Follow Mike London on Twitter at @mikelondonpost3.

North Rowan basketball coaches Andrew Mitchell and Brian Lytton are the club sponsors for the Fellowship of Christian Athletes at... read more