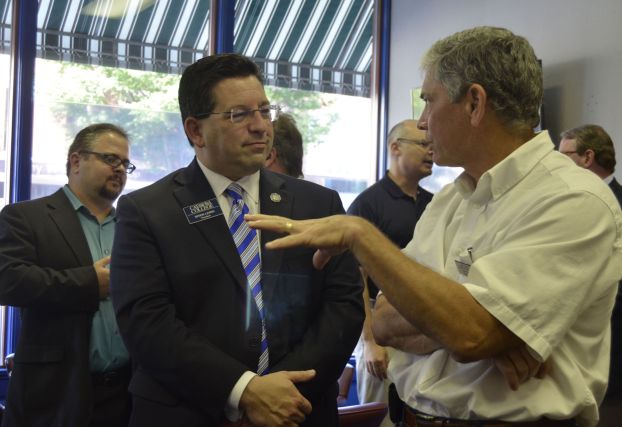 All it took was a swift snip of a giant pair of scissors to usher in excitement for the Downtown Catawba, a retail store located in the Plaza building.
The storefront is located at 100 West Innes St., Suite 103, near the corner of Main and East Innes streets.
The store not only houses Catawba College clothing and memorabilia, but it will also be a place to purchase event tickets and learn more about the college, located less than two miles at 2300 West Innes St.
Downtown Catawba officially opened April 8, but Tuesday was a chance for President Brien Lewis, Catawba College staff, members of the Rowan County Chamber of Commerce, elected officials and other businessowners and leaders to gather for a ribbon-cutting ceremony.
The space will also be a place to have special programming, which could include musical performances as well as poetry and literary readings. The Downtown Catawba will feature admission, athletic, music events and information.
“We want to send a signal that Catawba College is invested in the city,” Lewis said.
He said the space isn’t about generating revenue, but it was about bringing a presence to downtown.
“We do want this to be a resource opportunity for people to get information while in downtown,” Lewis said.
He hopes to get feedback about what else residents would like to see at Downtown Catawba.
Lewis has been mulling over the idea of having a downtown presence since he came to Catawba in 2012.
The location was important, Lewis said, it needed to be a space that was not too big, but manageable.
“We are delighted to have Catawba in downtown and in our city. It’s amazing to have four colleges within our city limits,” Mayor Paul Woodson said to the crowd.
“This is a great thing to really entrench and connect Catawba College to the core of our community here in downtown,” said Robert Van Geons, executive director for RowanWorks.
He said having assets like Catawba College and the other colleges help Salisbury stand out when talking to potential businesses.
Chamber member, Rusty Shuping, of Shuping Travel Service, said the store’s location will help Catawba be a more visible presence for people who may not get to its campus. Writer-in-Residence Dr. Janice Fuller will share her poetry at an event Friday at Downtown Catawba, 5:30-8:30 p.m. The event will celebrate Fuller’s newest book of poetry.
Downtown Catawba will be open from 11 a.m.-2 p.m. Tuesday, Wednesday and Thursday.
Contact reporter Shavonne Potts at 704-797-4253.