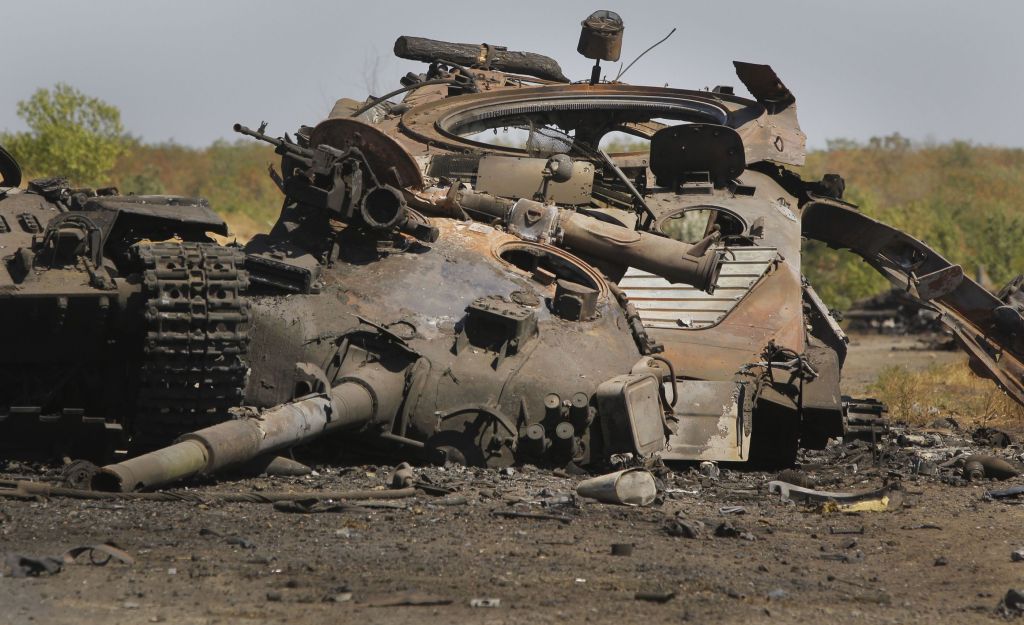 NOVOKATERYNIVKA, Ukraine (AP) — The ferocity of the attack on the fleeing Ukrainian troops was clear, days after the ambush by Russian-backed separatist forces.
More than 30 military vehicles lay in charred piles Tuesday. Villagers said dozens were killed, and some remained unburied. One soldier was blown out of his armored vehicle — apparently by a shell — his body left dangling from power lines high above.
The rout early Sunday near the village of Novokaterynivka marked a major intensification in the rebel offensive, one that the Ukrainian government, NATO and the United States say has been sustained by Russia’s direct military support.
Moscow has stepped up its harsh rhetoric as well. A leaked report said European Commission President Jose Manuel Barroso said President Vladimir Putin told him that Russia could take over Kiev “in two weeks” if it wished.
Following a month of setbacks in which government troops regained territory, the separatists have been successful in the last 10 days just as columns of Russian tanks and armored vehicles have been seen crossing the border. President Barack Obama and other NATO leaders will be attending a summit Thursday in Wales to create a rapid-response military team to counter the Russian threat.
Yuri Ushakov, Putin’s foreign policy adviser, said the Russian leader’s statement on Kiev was “taken out of context and carried a completely different meaning.”
Yet the results of much deadlier weapons of war could not be denied.
The smashed tanks, APCs and trucks were part of a massive column fleeing after being encircled in the town of Ilovaisk, which the Ukrainian government was compelled to concede after weeks of battles. Judging by how close together the stricken vehicles were, the incoming fire was precise and intense.
“They were going to surrender, and they began to bomb them,” said Novokaterynivka resident Anatoly Tyrn, who had the turret of a tank land beside his home.
Ukrainian army personnel have been allowed to travel to Novokaterynivka, about 36 kilometers (23 miles) southeast of Donetsk, and surrounding rebel-held areas to retrieve their soldiers’ bodies.
Villagers and the separatists say the number of Ukrainian military dead was huge, although the government has maintained a tight lid on the precise figure.
Tyrn said he believed more than 100 had died. Various rebel fighters separately gave estimates, all ranging into the dozens. Associated Press reporters saw at least 11 bodies in the last two days, although it was clear that was only a portion of the overall toll. Most of the dead were removed Monday, the rebels said, although one was buried so shallowly that the decaying remains were still visible.
“Only a few homes in the village have been left untouched,” he said.
As Tyrn spoke, the silence was broken by a controlled explosion of abandoned Ukrainian army equipment a couple of miles away.
“That’s far away,” he said, without flinching.
It’s uncertain about whether the Ukrainian troops had been offered a safe exit corridor by the rebels. The leader of the pro-government Donbas Battalion, Semyon Semenchenko, wrote on his Facebook page Saturday that there was an agreement. But rebel fighters told the AP a day later that the government convoy included too many military vehicles and weapons to be allowed through.
A group of surviving Ukrainian soldiers outside the town of Starobesheve told the AP that they were fired upon from all sides.
Rank-and-file troops increasingly have voiced exasperation at what they say is government mismanagement of the war. Anatoly Babchenko, a soldier captured Sunday by the rebels, was unsparing in his criticism.
“First they drove people to hunger, and now they’ve driven them to war,” Babchenko said from a basement cell at the Starobesheve police station. “They call this an anti-terrorist operation, but this is a civil war. Brother killing brother.”
The separatists began fighting Ukrainian troops in April, a month after Russia annexed Crimea. The war has left more than 2,500 people dead and forced at least 340,000 to flee.
It also has left Ukraine’s economy in tatters. Ukraine might need billions in additional support if the fighting persists through next year, the International Monetary Fund said Tuesday. Just covering the shortfall in the central bank’s reserves would require an additional $19 billion by the end of 2015, it said.
Ukrainian Defense Minister Valeriy Heletey said on his Facebook page that the counterinsurgency operation was over and the military was now facing the Russian army in a war that could cost “tens of thousands” of lives.
“This is our Great Patriotic War,” he wrote, using the local terminology for World War II.
Russia’s Foreign Ministry dismissed Heletey’s remarks as “shocking,” accusing him of trying to shift blame and keep his post amid a series of military defeats.
Ukrainian and several Western countries say Russia has sharply escalated the conflict by sending regular army units across the border. NATO estimates at least 1,000 Russian soldiers have entered Ukraine, helping turn the tide in the last week in favor of the rebels. The alliance also says 20,000 other Russian soldiers have been positioned along the frontier.
On a ridge overlooking a road running past Novokaterynivka, rebels stood watch in their tanks. Four trucks packed with grime-caked fighters swept by, along with two APCs and a couple of ambulances, apparently straight from more battles.
Villagers who have not fled appeared almost unfazed by the chaos around them.