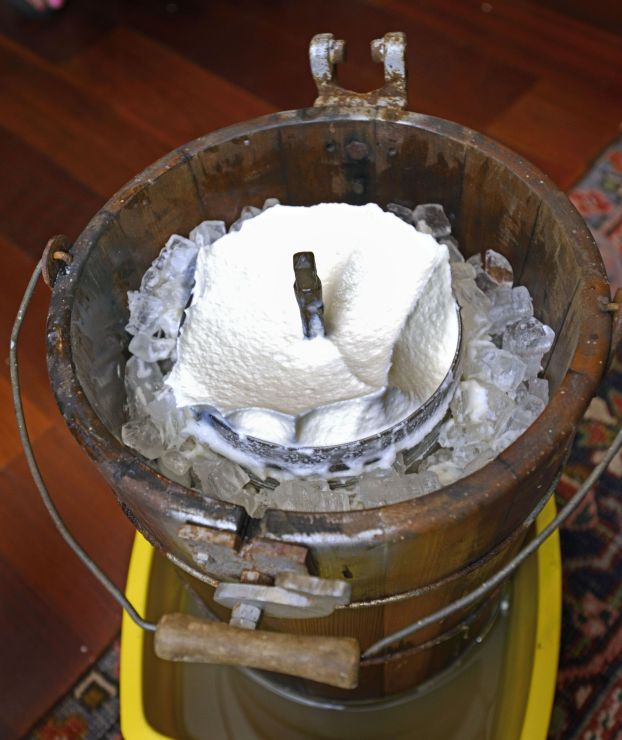 Homemade ice cream!
I mean homemade, hand cranked ice cream in a White Mountain freezer.
On a recent family beach trip, my daughter-in-law, Emmy thought it would be a great learning experience for the children to see and get to turn the hand crank of an old fashion ice cream freezer. She had memories of making ice cream with her grandparents.
About a year, ago my 88-year-old mother passed away, leaving volumes of drawers, cabinets and closets full of 88 years worth of stuff. Stored in the garage were two White Mountain ice cream freezers that were over 60 years old and in pretty bad shape for use.
Through the years, my dad had replaced the wooden bottom in the 6-quart freezer and most of the clamps that hold the churn parts. He made the new parts in his machine shop. The freezer had continued to deteriorate even more with his efforts and years of sitting in the garage.
My brother, Gary, who is a “Mr. Fix-it,” decided that he could get the old freezer going again. One of the galvanized hoops that holds the pine wooden tub together had rusted away. In a trip to the hardware store at the beach, he got two rather large hose clamps that he put together to wrap around the bucket to keep it together. He cleaned the outside of the rusty can and we were ready for ice cream. The inside of the can looked good.
When my sister-in-law poured in the ice cream mixture, there was a leak in the bottom of the can. Oh no! Did that mean no ice cream after all that work? Gary remembered that he has a roll of duct tape with him so a 3×3-inch square of duct tape went onto the bottom of the can and it worked like a charm. No leak and we were in the ice cream business again. Duct tape saved the day.
The idea that all of the kids would enjoy the slogan “love to turn the hand crank” was a bit overstated in the ice cream manual. With a lot of persuasion, my niece’s 12-year-old daughter Taylor did go first in the cranking. She didn’t like the idea of cranking the freezer. She was told, “Crank or you get no ice cream.” She said she didn’t want any anyway if it was not vanilla. It was vanilla and she did make a ceremonial few turns. The younger kids jumped into the action until the turning got harder.
The entire event was a “photo op.” Being a photographer, I hate the term “photo op” since it usually means a staged, meaningless event set up only for the photos. I think the word and idea started at the national White House in Washington for the national press corps. That is where we get most of our White House photo coverage these days.
All the smartphone cameras, point and shoot cameras, GoPro video camera and my Nikon were all busy snapping the photos. I had trouble getting photos with all of the female family members crowding me out with their smartphones.
My brother took over the cranking from the kids. When the cranking got really hard, my niece’s husband Ashton cranked us down the stretch to the finished reward. Ashton is a former Davidson College football linesman who has kept in good shape, so he could handle the cranking when others failed.
Watching the crank go around and around brought back my memories of my dad cranking it years ago on Sunday afternoons in our back yard. Gary and I would crank for a while then turn it over to Dad to finish it off. My job was putting a towel on top of the freezer and sitting on it to help hold it down while Dad cranked. I remember the discussion of “how firm is the ice cream? It would be always be more firm if we don’t put fruit in the mixture.”
Mother used to always take a churn full of ice cream to the church ice cream suppers that were held every summer. That is why they had two churns so they could take more ice cream to church. Actually, we found seven ice cream freezers in the garage, but the other five were electric. I think the cranking got too hard as Daddy aged and he went all-electric. Maybe it was because I wasn’t there to sit on the freezer any longer…
Snapping back to reality, I could see some of the white mixture seeping out around the top of the can. That always happens when you put too much mixture into the can. I don’t know the chemistry of it, but as the mixture freezes, it expands and seeps out. We started with 4 quarts of mixture in a 6-quart can, and we had seepage.
Finally, it was finished. The lid was lifted and the full creamy, cool dessert was ready. The kids gasped at the sight of the treat that was there for them after all of their hard work cranking but mostly watching.
The duct tape patch on the bottom of the can saved the day. More memories were created for a new generation with the old hand-cranked White Mountain ice cream freezer on the family beach trip.
Wayne Hinshaw is a photojournalist who lives in Rowan.

Yesterday: Talking about the old days in Concordia

In this newspaper photograph from October 1955, farmer Mitchell Karriker, right, grabbed a stump and listened to his uncle, 81-year-old... read more