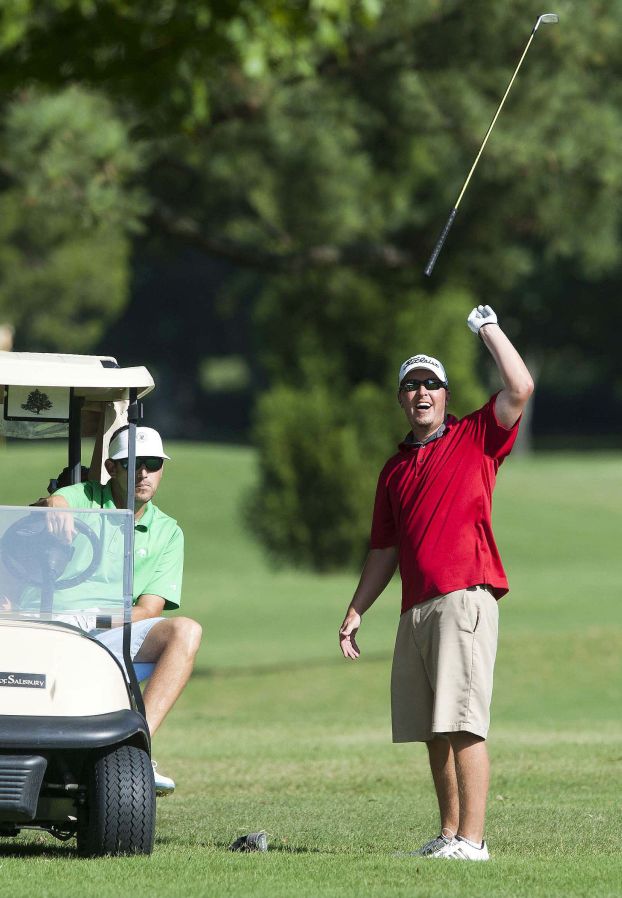 SALISBURY — It went in the books as a 5 & 4 victory for veteran Charlie Graeber and high school freshman Michael Childress, but the difference in Monday’s Labor Day Championship match was more like six inches.
That’s all it took for the 14th-seeded entry to level everything in its path this weekend at the Country Club of Salisbury.
“It was just a little adjustment we made in Michael’s stance after the first round,” Graeber said moments after he and Childress made quick work of runners-up Josh Brincefield and Eric Mulkey to win the 61st annual Crowder-Dorsett Memorial 4-ball tournament. “We brought his feet closer together — three inches on this side and three on the other. And that was it.”
The tinkering gave Childress a little more distance on the fairways and a little more accuracy on the greens. He and Graeber won five of the first eight holes, halved the next six and combined for four birdies to win convincingly. “We played well because we’re so comfortable together,” said the apple-cheeked, 15-year old Childress. “We know when to say what. We know when to be quiet. And obviously we know when to encourage each other to hit a good shot.”
The championship was the second for Graeber, who teamed with Joey Rusher to win the 1995 tournament.
“We were kidding about that,” Childress said with a smile. “The last time he won I wasn’t even born yet.”
Graeber and Childress reached the final round with a 3 & 2 semifinal victory against Glenn and Roy Dixon earlier Monday. Eighth-seeded Brincefield and Mulkey — longtime friends and former members of Salisbury High School state championship teams — bested Lee Frick and Blake Wray 3 & 2 in the semis to advance. That’s where the similarities ended.
“We putted tremendously all weekend,” Mulkey said after he and Brincefield failed to win a hole. “And this afternoon it just went away. I actually played my worst round of golf today. They totally earned it. We picked the worst time to play our worst golf.”
It was a chore right from the start as each golfer missed the fairway with his opening drive. Childress, who birdied six holes in Sunday’s quarterfinal round, remarkably pushed an approach shot through a maze of tree branches, then sank an 18-foot putt for birdie to give his team the lead after the first hole.
“I’ve been in those trees more than a few times,” he said. “I had a sense of how to play it. Once I got on the green I just had to get it started rolling downhill.”
Brincefield, who narrowly missed a number of short-range putts, tossed the youngster a verbal bouquet.
“You’ve got to give credit to Michael,” he said. “He’s so young, but he makes his putts. He made a good one on 1. He made a good one on 2 and he made a good one on 4. That was a lot for us to overcome.”
By the fourth hole Graeber and Childress were already 2-up and threatening to run away with the title. They nourished their lead on the par-4 fifth, where Childress putted for par and Mulkey three-putted for bogey. Then on No. 7 — a 418-yard par-4 — Mulkey slid an eight-footer for par just wide that lost the hole.
“They made some mistakes,” said Graeber, who coached Childress at Sacred Heart a few years back. “But we never let anybody get close to us, especially after the first and second rounds. We got rolling.”
They rolled all the way to No. 14, where Graeber chipped out of a water hazard and drained a three-foot putt to clinch the title.
“When you get to this level, it always comes down to putting,” said Brincefield. “And putting was the difference today,”
Nobody did it better than Childress over the long weekend of single-elimination drama.
“I always play better when I’m relaxed and having fun,” he said. “Sometimes the pressure’s there and it kind of helps. Today we got off to a great start, and if there’s one (course) and one tournament where you need to get your putter going, it’s this one. I had it going for me, especially on the front nine. When I get it going, it’s just a special feeling.”

NOTES: Defending champions Jake Kennedy and Davis Richards, surprised in the opening round by Jim Christy and Jimmy Hubbard, rallied to win the consolation title. “I guess that means we won two years in a row,” Davis said after the pair shot 6-under over 15 holes and won 4 & 3. … Craig Rae and Andre Resner won the Senior flight with a 1-up decision over John Kyger and John Henderlite. And in the women’s championship bracket Allison Adams and Grace Yatawara won their fourth consecutive title with a 5 & 3 win against Kristy Laton and Faye Durland.

Yesterday: Talking about the old days in Concordia

In this newspaper photograph from October 1955, farmer Mitchell Karriker, right, grabbed a stump and listened to his uncle, 81-year-old... read more