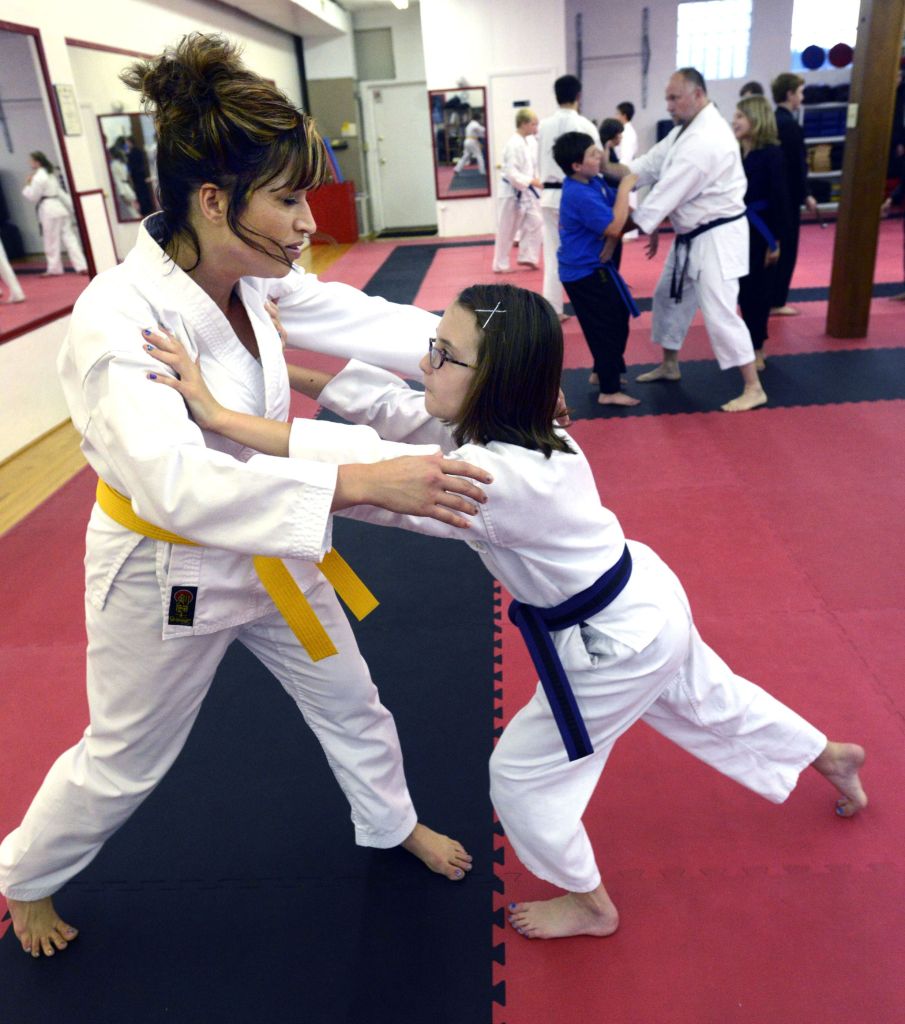 CHINA GROVE — Angela Mullis remembers exactly what it felt like when she took a roundhouse kick to the ribs.

Whoooooooosh. The air left her body.

Then the pain came.

EMTs advised her to stop what she was doing, but Angela was adamant. She finished the fight.

Angela, 35, is a wife, mom and teacher. She also participates in competitive karate. A petite 5-foot, 3-inch dynamo, Angela has put on about 10 pounds of muscle since beginning karate a little more than a year ago. Her cholesterol levels have dropped significantly. But most importantly to her, the sport is something she can do with her daughter, Adriana, 10.

At age 6, Adriana started taking karate at Sidekick Karate. For several years, Angela sat on the bleachers with the other parents. Then one day, she had an epiphany.

“I was watching her and I thought, I can do that,” she says. “I told her to get out there and not be afraid to do it. I thought I should get out there.”

Angela and husband John, a mechanic with Wayne Bros. and assistant fire chief at Atwell Fire Department, also have a son, Gray, 6, who has an on-again, off-again relationship with karate.

During days that they have class, Angela stays after school and gets her work done, and the children do their homework. They eat at school and then head over to the karate studio.

She points out, “There are not a lot of sports you can all do as a family.”

A lot of other families feel the same way.

Visit Sidekick on a weekday evening, and you might be surprised at what you see. If you grew up taking karate in the 1970s and 80s, you know it was a sport dominated by men and boys.

“We have a strong female program,” says Robert Taylor, owner of Sidekick with wife Carrie. “The girls have done very well the last few years.”

There’s also cohesion among students and families, who support each other during competitions, he says.

“Karate suits me,” the fifth-grader says. “I’ve learned a lot of fighting routines.”

“When I have to speak in front of staff,” she says, “I get a knot in my stomach and I feel like I’m gonna throw up. But I’m getting better at it now.”

In karate, the belts are ranked in a color system from white for beginners all the way up to the coveted black belt. Angela is several years away from a black belt. Promotions are based on attendance and evaluation. Adriana will attain it before she does, and will also soon progress to another class.

Angela, Adriana and Gray take classes on Tuesdays and Thursdays, then mom and daughter practice all day on Saturdays during competition season, which runs November to July. The family has traveled to competitions in Virginia, South Carolina and Georgia.

Because not many women her age compete, Angela is sometimes paired with women who are ranked higher than she.

Carrie Taylor, who owns Sidekick with husband Robert, says there are typically a handful of women in each age division during competitions.

Thus the reason Angela got kicked in the ribs.

Another time, at a practice session in Charlotte, she faced a woman with a black belt.

“I was defending and praying I wasn’t going to die,” she says. “You get bruised a little, but you’re all right.”

Jenna Hare says karate means something different for each of her five children, ages 5 to 13. For example, for one, it provides needed structure; for another, it’s recreation; and for another, it’s just for fun.

For Jenna, she says, “It’s a way to hold myself accountable, and a way to be in shape. I love to fight.”

“It’s been very good for him,” says Janice, who takes karate to stay in shape.

Julia Rooney’s two daughters have taken karate, and now she does, too.

Robert notes, “Karate should be a sport for everybody. It’s adaptable.”

For his younger students, he tells them he expects good behavior at the karate studio, at school and at home. He leads through praise. “Karate gives students self-esteem to carry themselves in any situation and be confident.”

“We are family oriented,” Robert says. “This is our family.”