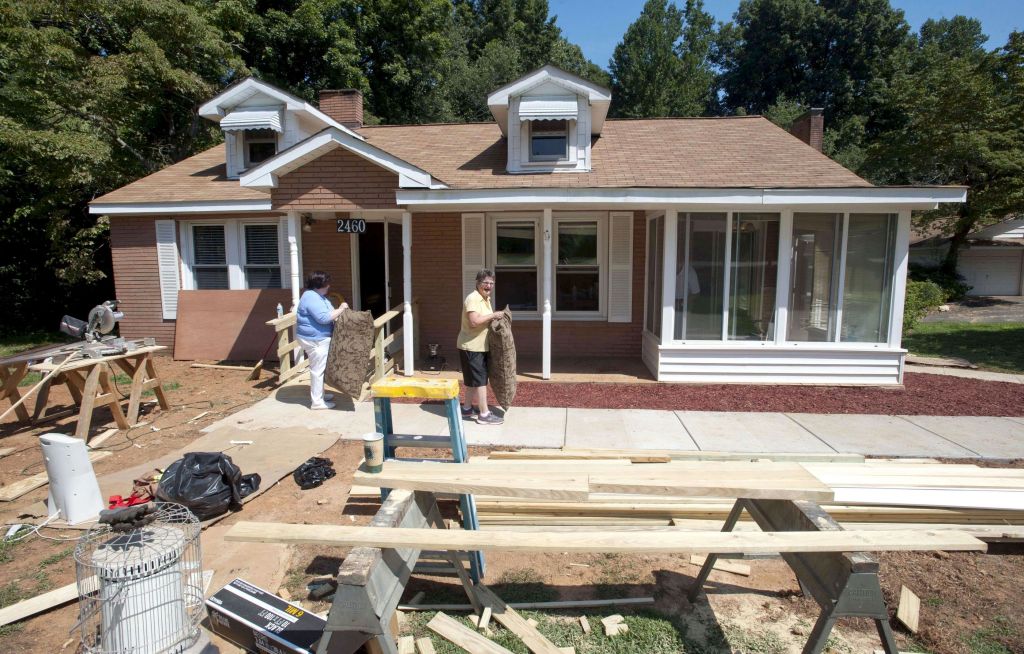 CHINA GROVE — By the end of this week, “Project Get Wendy Home” should be winding up.
Since Aug. 11, Sunday School classes from First United Methodist Church in China Grove — with the help of many other generous people — have led a significant remodeling of Wendy and Kelly Hunsucker’s home on Mount Hope Church Road.
It’s all aimed at making the home more accessible for Wendy, whose latest setback from reflex sympathetic dystrophy syndrome (RSDS) has confined her mostly to a wheelchair.
When Terry Holt, a retired educator, heard his onetime Erwin Middle School student was living elsewhere because of her maneuvering difficulties, he had one thing to say to his Pairs and Spares Sunday School Class:
“Our new project,” he announced one Sunday, “is to get Wendy home.”
It quickly took on a life of its own.
The past three weeks have seen Holt and others travel to the Hunsuckers’ home daily to do some demolition, widen door frames, put up new drywall, redo wiring and plumbing, remodel a bathroom, build a wheelchair ramp to the front door and lay a new front sidewalk.
There will be painting, new flooring and more cleaning up involved, too.
The volunteers also are giving a U.S. Marine Corps theme to the bedroom of the Hunsuckers’ 11-year-old son, Trevor.
The professionals required for certain jobs have donated their labor. Monetary contributions have gone toward paying for all the materials.
Mike Burr has served as general contractor, handling much of the planning and ordering.
“Thank you so much,” Wendy wrote in a text to the workers Friday. “I can’t tell you how much this means.”
The Hunsuckers have been nomads in recent weeks, staying at various relatives’ homes.
Becky Sifford, Wendy’s mother, said Holt and the other church members are the most selfless group of people she knows.
“I can’t even hardly talk about it because it’s so humbling,” Sifford said. “They’re all amazing people.”
��Project Get Wendy Home” has extra special meaning for Holt, who grew up in this same 1946 house and sold it to the Hunsuckers six years ago.
Holt knew both Wendy and Kelly from his days at Erwin. And though they’re not members of First United Methodist in China Grove, Kelly is Scoutmaster for the Cubs at the church.
Kelly called Holt one day with a question about the house, and during the conversation, Holt learned about Wendy’s having to stay elsewhere because of her RSDS.
Holt didn’t give Kelly any say in whether or not the Sunday School classes (the Williams Class also is involved) should take on the remodeling of the house. All he said was, “Look, this is what we’re doing.”
“I just announced to him we were coming,” Holt added.
When Wendy Hunsucker was nearing the end of eighth grade, she fell and injured her right leg while practicing for a dance competition.
Though she didn’t break any bones and doctors couldn’t find anything wrong with her muscles, the leg kept swelling and caused her a lot of pain.
It was so bad at times, she would pass out. Wendy eventually was diagnosed with a problem related to her sympathetic nerve system.
A rare disorder, RSDS can occur in both legs or be localized to a knee or hip. Its exact cause isn’t fully understood, although it’s usually associated with injury to the nerves, trauma, surgery, infection, radiation therapy and cardiovascular disease, according to Web MD.
Wendy Hunsucker has dealt with RSDS for more than 20 years. Kelly Hunsucker said his wife also was treated for and survived a brain tumor almost two years ago. She regularly goes to Duke University Medical Center for treatment for the RSDS, Kelly says.
This past Wednesday was Wendy’s birthday, and Friday was the Hunsuckers’ 15th wedding anniversary.
Sometime soon, there will be a new day to celebrate — Wendy’s coming home party.