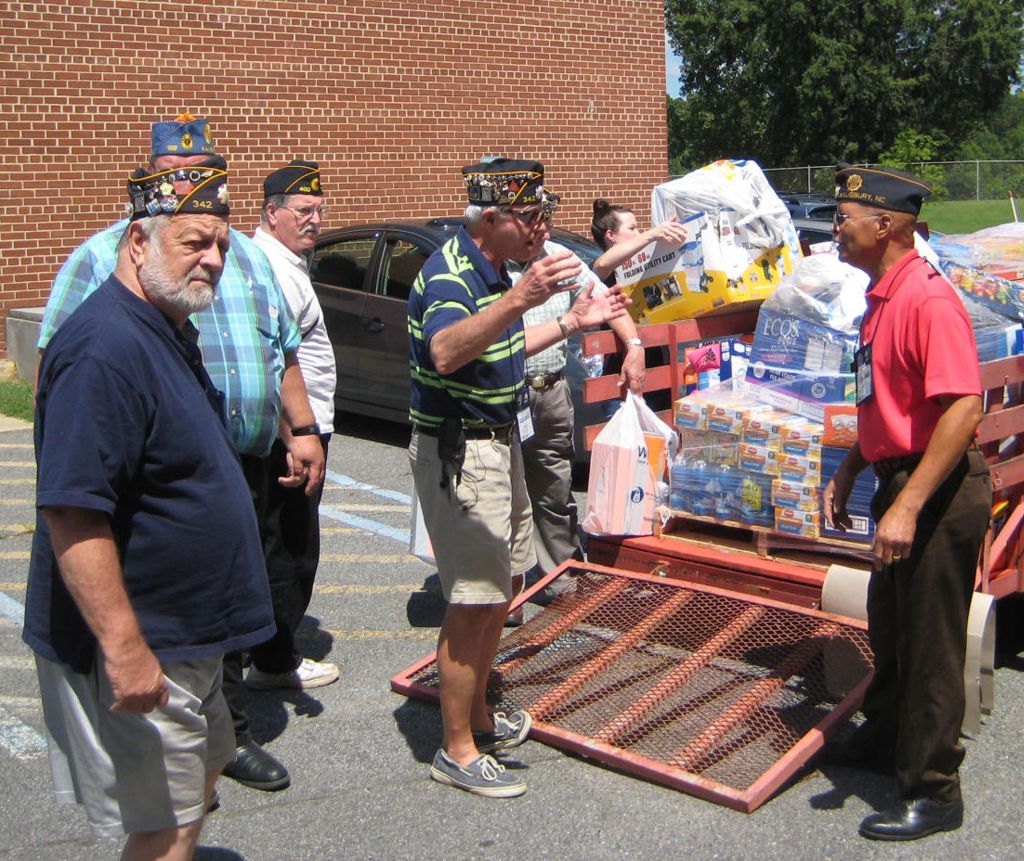 Several veterans at the W. G. (Bill) Hefner VA Medical Center received a surprise Monday afternoon when Legionnaires began handing out food gift cards and calling cards.
“I am just running out of minutes on my pre-paid cell phone so this is great,” Army veteran Gary Smith said.
The American Legion’s Operation Comfort Warriors (OCW) program purchased $10,000 worth of comfort items and gift cards for the Salisbury medical center during the Legion’s 96th National Convention in Charlotte. The items included clothing, toiletries, cleaning supplies, snacks, water and more.
“This is why we are The American Legion — we are here to take care of veterans,” said Keith Melick, member of Post 23 in Leavenworth, Kan., and a member of the Legion’s Veterans Affairs & Rehabilitation Commission. “It’s great to see the veterans’ faces when we deliver the gifts.”
About seven Legionnaires from Kansas and North Carolina unloaded the supplies and then delivered gift cards to many veterans that were in the medical center’s library, gym and common area. Local Legionnaires from the Harold B. Jarrett Post 342 pitched in to help, including Hercules Cannon, who drove the trailer and Mike McCowan took pictures. Others from Post 342 who pitched in were Harry Garwood, Dennis Millbrandt, Wayne Kennerly, Commander Gardner Kenner and Judge Junior advocate Shane Crase.
“I appreciate this very much. I will definitely use the gift cards,” Air Force veteran Buck Keziah said. Keziah recently won a silver medal in the bowling portion of the 34th National Veterans Wheelchair Games in Philadelphia last week.
Staff at the medical center also appreciated the outpouring of support.
“I think this (OCW donation) is fantastic. The American Legion is a great organization; when I call on them for something I need they are there for me,” said Les Eason, chief of volunteer services at the Salisbury VA Medical Center. “Having the Legion here delivering gifts doesn’t surprise me. They’re doing what they do – it’s veterans helping veterans.”
See more at: http://www.legion.org/operationcomfortwarriors/224363/ocw-donates-10k-items-north-carolina-va#sthash.RkU0Ql2W.dpuf