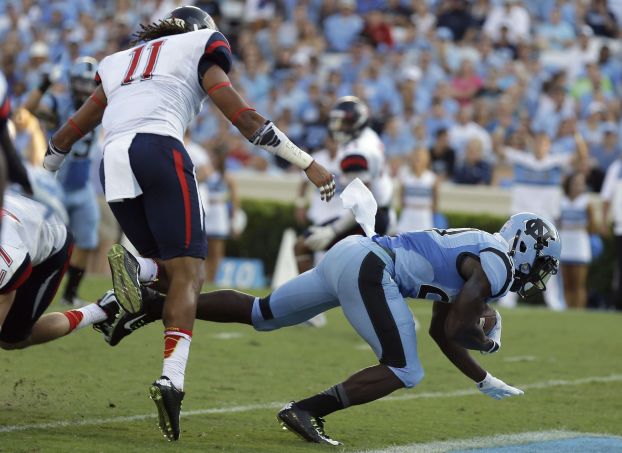 CHAPEL HILL (AP) — Marquise Williams accounted for four touchdowns while Jeff Schoettmer returned an interception for a score during North Carolina’s game-turning flurry, helping the No. 23 Tar Heels beat Liberty 56-29 on Saturday night.
Schoettmer’s 19-yard return came during a run of four touchdowns in fewer than 4 minutes, which jolted the Tar Heels out of a sluggish and mistake-prone performance in the season opener.
Liberty led 22-21 with about 6 minutes left in the third quarter before Williams found Mack Hollins for a 33-yard scoring pass. Williams later scored on a 15-yard keeper and backup Mitch Trubisky followed with his first career TD pass for a 49-22 lead with 2:06 left in the quarter.
That stunning turnaround couldn’t have happened without the maligned defense — perhaps UNC’s biggest question mark coming into the season — forcing three turnovers in the third and setting up the sputtering offense with short scoring drives against Liberty.
The win capped a bumpy game week for UNC, which is ranked to enter a season for the first time since 2010. Coach Larry Fedora suspended four defensive players Wednesday, including two starters, for a violation of team policy without specifying what rules were broken.
That came a day after a Yahoo Sports report of an alleged hazing altercation that left a redshirt freshman walk-on receiver with a possible concussion. The school has said it is investigating what it described as an incident involving team members, though it hasn’t confirmed it was a hazing incident.
For a time Saturday night, it looked as though the Tar Heels were flirting a surprising home loss to a championship subdivision team. But the defense allowed just 53 yards in the third quarter to provide a needed spark and finished with six takeaways for the game.
As for the offense, Williams got the start after battling with Trubisky for the starting quarterback job through preseason camp, though the team rotated them for much of the night. Williams shook off two badly thrown interceptions and finished with 169 yards passing with two TD throws to go with two scoring runs — the first one giving UNC a 21-15 lead with 28 seconds left in the first half.
Todd Macon ran for two touchdowns and D.J. Abnar added one for Liberty, a Big South Conference member playing a ranked bowl subdivision opponent for the first time. Jacob Hagen also returned a fumble 27 yards for a touchdown and the 22-21 lead with 9:25 left in the third before the Tar Heels finally kicked into gear.