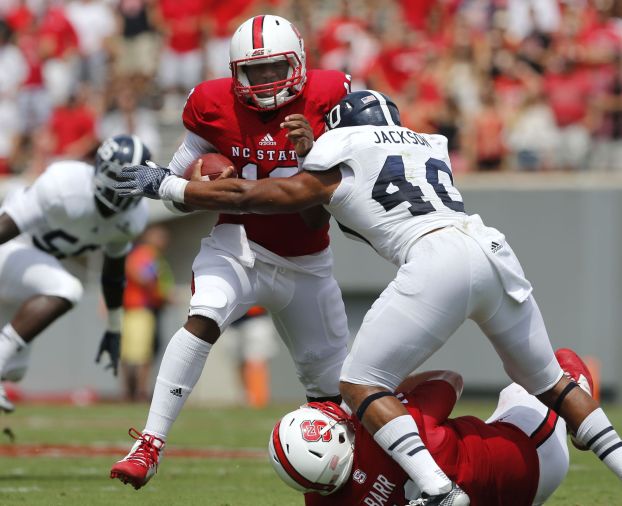 RALEIGH (AP) — Jacoby Brissett had gone almost two years without playing in a regular season game.
His return was worth the wait.
Brissett threw for 291 yards and three second-half touchdowns to help North Carolina State beat Georgia Southern 24-23 on Saturday in the season opener for both teams.
Brissett, a transfer from Florida who sat out last season because of NCAA transfer rules, shook off a slow start to throw touchdown passes on the Wolfpack’s final two drives. He completed 14 of 16 passes for 136 yards on those possessions.
“My adrenaline was pumping a little bit too much the first game back,” Brissett said. “But the team stayed around me, and we came out and played and finished a great game.”
Brissett connected with Matt Dayes on a 35-yard touchdown pass down the right sideline for the go-ahead score with 1:37 left.
Georgia Southern had one last chance, but Kevin Ellison’s fourth-down pass from his own 28 fell incomplete with 1:02 left.
Bra’Lon Cherry caught two touchdown passes for N.C. State, which trailed 20-10 in the fourth quarter.
“It came down to the fourth quarter, and I think our football team was in better shape,” N.C. State coach Dave Doeren said. “We weren’t cramping, we weren’t laying on the ground, we weren’t tired. We were playing, and that’s why we won the game.”
Ellison passed for 184 yards and rushed for 116 more to lead the Eagles. Matt Breida had a 61-yard touchdown run for Georgia Southern, and Kentrellis Showers made a leaping 29-yard touchdown catch late in the second quarter to give the Eagles a 17-3 lead at halftime.
It was the first game as a member of the Football Bowl Subdivision for the Eagles, who won six national championships in the Football Championship Subdivision before joining the Sun Belt Conference.
“We are disappointed,” Georgia Southern coach Willie Fritz said. “We are going to learn from it.”
N.C. State, which lost its final eight games of the 2013 season, was in big trouble for much of the game.
Brissett passed for just 78 yards and one interception in the first half, and kicker Niklas Sade missed field-goal attempts of 52 and 54 yards in the second quarter.
But the Wolfpack’s defense answered a big stand by Georgia Southern’s defense to change the game.
Ahead 20-10, the Eagles stopped N.C. State’s Shadrach Thornton for no gain on fourth and 1 from the Georgia Southern 9 on the first play of the fourth quarter. They took the ball and were driving when N.C. State came up with a momentum-changing turnover.
On second and goal from the 1, Ellison never got the ball on the center-quarterback exchange. N.C. State’s Monty Nelson recovered the fumble.
“That was the turning point in the game,” Doeren said.
The Wolfpack marched 99 yards on 12 plays, with Brissett finding Cherry for a 13-yard touchdown to cut Georgia Southern’s lead to 20-17 with 6:55 remaining.
The Eagles moved back down the field thanks to a 52-yard run by Ellison, but they settled for a 31-yard field goal by Alex Hanks to take a 23-17 lead with 3:35 to play.
“Obviously, what we did in the first half is pretty disappointing,” Doeren said. “But the beauty of football is that it’s a four-quarter game, and we just kept playing.”