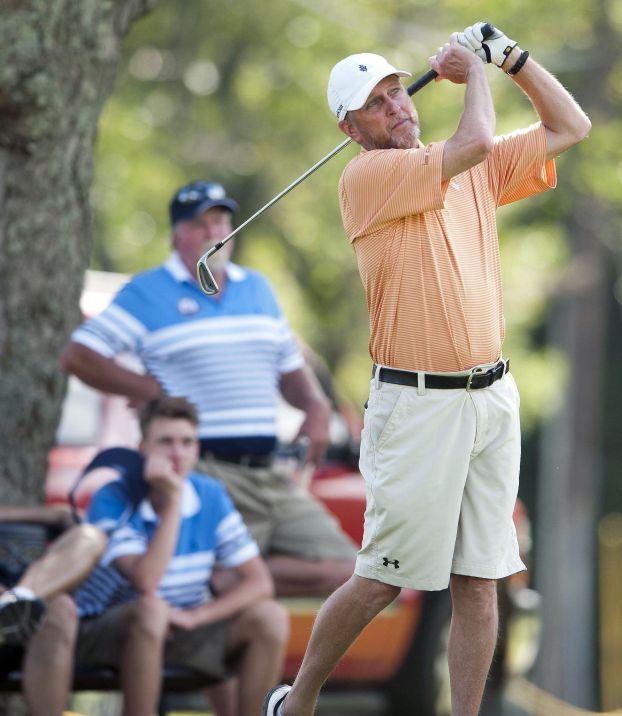 SALISBURY — The grand-daddy of local golf tournaments was expected to be dominated by youthful talent this year and it was for the most part on opening day Saturday.

But there were some significant exceptions in the first round of the 61st annual Crowder-Dorsett Labor Day Golf tournament at the Country Club of Salisbury. The biggest surprise was a close loss by the defending champions and top-seeded team of Jake Kennedy and Davis Richards. They fell 1-up to the veteran team of Jim Christy and Jimmy Hubbard.

Sixteen teams made up the championship flight in the event based on qualifying scores from last week. The match play competition will continue until Monday afternoon when a champion will emerge. And there will definitely be a new champ this year with the win by Christy and Hubbard.

“In match play anything can happen,” Christy said. “We were very consistent today, but it was never more than a one-hole lead all day. We beat a really good, young team.”

Kennedy, 18, a Gardner-Webb freshman golfer placed the blame for the loss on himself.

“I shot 74 today and made no birdies. Davis (a South Rowan senior) had three birdies but you are not going to beat Jimmy Hubbard and Jim Christy that way.”

All of the first day championship flight matches were extremely competitive.

The 2012 champion team of Chris Owen and Ken Clarke also won on the first day 2 and 1 over Jon Allen and Derek Paschal while two other teams featuring a young gun and an older partner also prevailed.

The most impressive comeback win the first day saw Lee Frick and Blake Wray come from three holes down with six left to rally past Ronnie Eidson and Andrew Morgan 1-up in 19 holes.

“That was the grind of all grinds,” Frick said of the match. “In an event like this you have to win one close match like that to be successful. And this is the tournament you want to win, no doubt.”

Frick and Wray birdied 14 and 15 but still trailed by two holes with two to play after Morgan notched a birdie. But the winners won the next two holes, capped by Wray’s 18-foot birdie putt to send the match to an extra hole. Frick then iced it with a 15-foot birdie putt.

Quarterfinal pairings will tee off this afternoon at 1:30 p.m. The semifinals follow on Monday morning at 8:30 a.m. with the final two teams squaring off for the Crowder-Dorsett trophy at about 1:30 p.m. Labor Day afternoon.

“I think the field this year may be one of the strongest we have ever had, “said Labor Day tournament committee chairman Jake Alexander. “That is based on the number of really good young players, not only high school and college players but the under-30s that are just tearing the golf course up.”

He also noted the low qualifying score this year of 64, with three others at 65 and 10 teams at 68 or under.

“Whoever wins this not only will deserve to win,” Alexander said, “but the golf, I guarantee you, will be great.”

The medalist team of Dyer and Miller wrapped up their 1-up win over Lefler and Barnette, then made a bee line for the practice putting green.

“That’s because my partner struggled today on the greens,” Dyer said with a laugh.

The duo, members at Irish Creek Club in Kannapolis, faced a big deficit right out of the gate as Lelfler and Barnette were four under after three holes.

“It looked ugly, but we kept playing hard,” Dyer said. “We finally caught them.”

Two other Irish Creek products didn’t fare as well, as Austin, 19, a college freshman and Cress, a Concord High junior were no match for the father-son Dixon team.

“They really lit it up” Austin said. “We supported each other, but there was not a lot we could do.”

The Dixons are the only father-son team in the event this year and are very compatible, says Roy, a UNC Greensboro golfer.

“We get along very well,” he said. “We we both know we can’t let emotions get out of control or it will go south very quickly.”

A similar playing relationship makes Graber and Childress a good team, as they shot a 4 under 66 on Saturday.

“We don’t put pressure on each other and we play well together,” said Graeber who won the tournament back in 1995. He coached Childress three years at Sacred Heart and has watched his game improve dramatically while teaching him the mental aspects of the sport..

“It is a lot of fun out there,” said Childress, a freshman at Cannon School. “ I like to think we are both good golfers and we are very competitive too.”

A complete listing of first day results as well as pairings for today’s matches in all flights can be found in the scoreboard section of today’s newspaper.

Woman on motorcycle hurt in crash at Square

SALISBURY — A Salisbury woman was hurt early Friday evening when a Camaro ran a stoplight at the Square and... read more