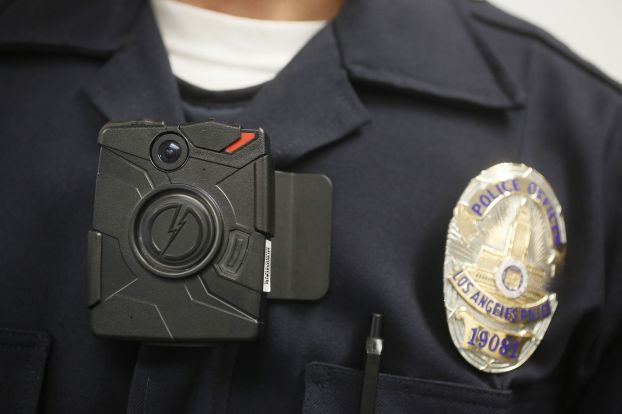 WASHINGTON — It was a police shooting that initially triggered a public outcry similar to the recent confrontations in Ferguson, Mo.
In 2011, police in the small community of Rialto in San Bernardino County shot and wounded a man who witnesses later protested was unarmed. Outrage grew after cellphone video taken from a nearby balcony suggested that police had overreacted.
But unlike in Ferguson, where it is still not clear why Officer Darren Wilson shot Michael Brown at least six times, a Rialto officer was wearing a small camera on his uniform. That camera revealed what was unseen from above: The suspect bolted from his car and ran into the street, waving a handgun in the air.
The footage allowed police to defend themselves against allegations of excessive force. “We were very, very upset about how they reacted,” said Police Capt. Randy De Anda. “We said, ‘If you want transparency, here are the actual facts.’ ”
In an era of questionable officer-involved shootings, cop cameras are catching on around the nation and will probably spread as the furor over Ferguson continues.
The Justice Department is weighing whether to provide funding to more police departments to buy body-worn cameras, which are usually placed on an officer’s lapel, shoulder or cap. The Los Angeles Police Department is testing body cameras and New York this week announced plans to study the program too.
Although some local law enforcement agencies are resisting the campaign, others say that there are potential benefits, as seen in the Rialto case.
“If the public has this type of technology with cellphones and iPads, why not all the better that we have this resource for our officers too?” De Anda said.
In Salt Lake City, for instance, an officer shot and killed a 20-year-old man two days after Brown was slain Aug. 9 in Ferguson. But in Utah, the officer had turned on his body camera. That video will probably play a key role in deciding whether the officer is disciplined, prosecuted or cleared.
In Rialto, officials say that complaints of police abuse plummeted after 120 uniformed officers were equipped with cameras in early 2012.
“Having a video record of events not only deters the use of excessive force, but it also helps dispute or demonstrate claims of police brutality,” said Rep. Adam B. Schiff, D-Calif., who is leading an effort to provide Justice Department grants for body cameras nationwide.
In Los Angeles, about 30 officers who patrol skid row have been testing various body camera models with a goal of purchasing about 500 cameras.
The plan originated with Steve Soboroff, president of the civilian commission that oversees the LAPD. On his first day as a commissioner, he said the cameras were important and vowed to raise funds to bypass budget constraints and red tape. He has since raised more than $1 million.
Schiff said the cost of cameras would more than pay for itself because the videos would discourage false lawsuits against the police. “The savings can be quite dramatic, through improved community relations and decreased litigation,” he said.
That may be the result in the Salt Lake City shooting.
“We’re just waiting for the prosecutor to finish his investigation and then we’ll release [the footage] as a public document,” Police Chief Chris Burbank said in a phone interview this week. “You will see a young man being shot, through the eyes of a police officer…. These cameras are capturing good work by law enforcement. If we’re doing something wrong, it will capture that too. But it is an advantage for all law enforcement. What the camera captures is a factual representation of what took place.”
Burbank said it started with 15 cameras two years ago, an idea born from his work as vice president of the Major Cities Chiefs Association. By the end of next month, about 440 sworn officers on duty will be equipped with them, he said. Around the country, he said, about a dozen cities use cameras.
In Rialto, where 120 officers patrol 30 square miles and protect 105,000 residents, officials said the incidence of police use-of-force events dropped by 66 percent the first year cameras were worn, and in the second year, complaints against the police decreased 83.3 percent.
De Anda said they spent $100,000 in grant programs, or about $1,200 to acquire each device and run an internal website to store the images.
“We have had a big success,” De Anda said. “Great success.”