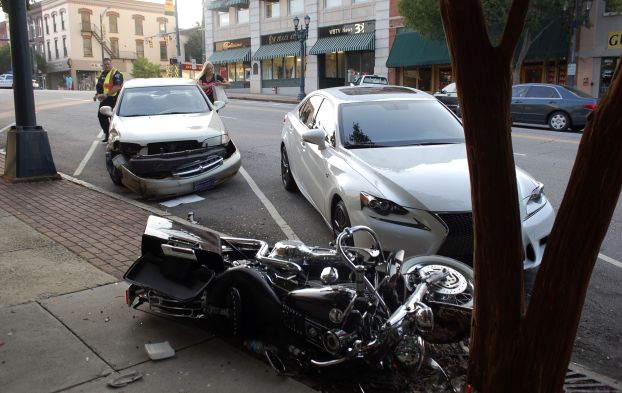 Woman on motorcycle hurt in crash at Square

SALISBURY — A Salisbury woman was hurt early Friday evening when a Camaro ran a stoplight at the Square and hit her motorcycle.
In the end, the chain reaction from the accident ended up involving two motorcycles and three cars.
After being knocked off her motorcycle, Donna Marks, 57, of Salisbury, was able to make it under her own power to a corner in front of Spanky’s. Emergency workers immobilized her, lifted her onto a stretcher and transported her by Rowan County EMS to Novant Health Rowan Medical Center.
Marks was conscious, moving and speaking to those helping her.
After its impact with the Camaro, Marks’ Harley-Davidson motorcycle kept moving and tumbling down the hill along North Main Street before striking a parked Nissan Altima sedan, glancing a Lexus beside it and hitting a street tree.
Another Harley-Davidson, operated by Jerry Scott, who had his 11-year-old daughter Gracie as a passenger behind him, hit the back left end of the Camaro as it continued on after hitting Marks’ motorcycle.
“I hit him and took a nosedive toward the pavement,” Scott said. “… It seemed like as soon as my bike hit the pavement, I was up, trying to get Gracie up.”
Both motorcycles — Scott’s and Marks’ — were traveling east on Innes Street toward the direction of Interstate 85. They were in separate lanes.
The Camaro, driven by Devin Bivins, 19, of Salisbury, was damaged extensively and came to rest at the northeast corner of the Square. Scott said his motorcycle hit under the left rear gas cap of the Camaro.
“He was looking down the whole time,” Scott said of Bivins as he was going through the intersection.
Salisbury Police Officer W.M. Harrington confirmed Bivins ran the red light, as the Camaro was traveling north on Main Street.
Scott and his daughter had some scrapes, but they seemed to be OK and stayed on the scene as officers and bystanders tried to sort things out.
Scott’s wife, Ginger, was trailing her husband and daughter’s motorcycle and witnessed the whole thing.
“She’s more than fortunate,” Ginger Scott said of Marks’ surviving the crash.
Ginger Scott said Marks’ motorcycle slid “like a whirlwind” down the hill of North Main Street before hitting the cars and tree.
The Scotts were heading home after a dinner at College Barbecue on the western end of town.
The parked Altima hit by Marks’ motorcycle also was damaged extensively in the front and had to be towed away. It belonged to Madelyn Varner, who was across the street with her friend Skylar Truell, who had driven the Lexus.
Truell had just had the last fitting of her wedding dress at Bellissima and was packing up everything to take back with her to Lexington. Varner will be a bridesmaid for Truell.
“Had we been walking out here any sooner, that maybe would have hit us,” Truell said.
Her wedding is scheduled for Nov. 2.
Contact Mark Wineka at 704-797-4263.

Season winding down, but questions growing

With summer gardening activities winding down, it would be a natural assumption that gardening inquiries would dwindle. However, Cooperative Extension... read more