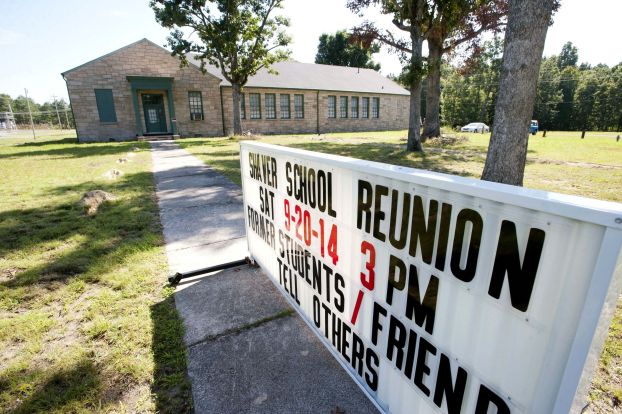 MORGAN TOWNSHIP — When most people consider real estate in this southeastern part of Rowan County, they have in mind a country farmhouse or property close to good hunting and fishing.
But for several years, Larry Wyatt kept a watchful eye on a school — the old Shaver School, built by the Works Progress Administration during the Depression.
In March 2013, Wyatt purchased it.
“It comes as a surprise when I tell people I own a school,” he says.
Located at the corner of Stokes Ferry and Reeves Island roads — about six miles south of Liberty — Shaver School is constructed of beautifully cut granite, with a dozen front windows facing the road.
“It was too good of a structure to sit here and let go downhill,” Wyatt says.
Shaver School encompasses 7,300-square feet inside, including seven bathrooms and a large auditorium. It’s a good-sized project for Wyatt, a retired Rowan-Salisbury Schools teacher and administrator, and his son, Nathan, a sophomore at Catawba College.
Larry Wyatt works here daily toward his ultimate goal of transforming the school into a community center.
But first he hopes to have a simple reunion (see box) for people who once attended Shaver School, which offered grades 1-7 between 1936 and 1950.
The school’s “Shaver” namesake comes from Leroy and Clarence Shaver, whose family donated the property for the school. They were members of Zion United Methodist, which used to be Walnut Grove Methodist when the school was built.
Leroy Shaver was a Methodist missionary in Japan before World War II. During the war, he ministered at a Japanese interment camp in Idaho.
Wyatt’s late father attended seventh grade at Shaver before moving on to Richfield High School. As a youngster, Wyatt himself attended summer Bible school here, and as a teenager and young adult, he played football and baseball in the school’s backyard.
“It would take a pretty good wallop to get to the road up there,” Wyatt says motioning toward a big shade tree that used to be near home plate.
Most of the people who come to the Sept. 20 reunion, Wyatt estimates, will be between 70 and 90 years old.
After the reunion, Wyatt hopes to set aside the second Saturdays in October and November to provide a home for a church-related flea market. Churches within a wide radius will be invited to use the school as a place to sell items and raise money for their various causes.
Wyatt will continue the Saturday flea markets next spring. By that time, the school building also will be available for events such as community meetings, weddings and receptions, club gatherings and music such as small gospel and bluegrass concerts.
“I want to make it something good for the community,” Wyatt says.
ggg
Wyatt’s career in education included 28 years at Knollwood Elementary School — many of those as assistant principal. He has been retired 11 years, and he lives on Reeves Island Road about a mile from the school, which also is just south of his church, Zion United Methodist.
After Shaver School closed and kids went instead to Rockwell, Richfield and Morgan elementary schools, the building served as headquarters for 12 years for Mid State Wholesale Furniture.
After that, four different taverns or bars tried to make it work in the old school with moderate success, but there also were some vacant years mixed in, including the three-and-a-half years Wyatt kept driving by and seeing a Realtor’s for-sale sign.
One Sunday, he went early to Zion United Methodist to check on the heating system, when he noticed a new for-sale sign.
He called the telephone number the next morning and learned F&M Bank had foreclosed on the property. The bank was asking about a third of what the price tag had been before.
Wyatt won’t say what he paid, but he owns the building and its 5.3 acres free and clear.
ggg
The two front classrooms in the school used to hold eight pool tables in the tavern days. Over time, a couple of walls were torn out between classrooms to provide bigger dance floors and spaces for tables and bars.
Wyatt learned that too much has changed inside for the school to be considered for the National Register of Historic Places.
But he has plans for nostalgia-filled rooms devoted to old school days; faith, family and friends; and something he calls time, temperature and travel.
The school auditorium will be the focal point for many events. Wyatt already has purchased 12 8-foot-wide tables and 100 folding chairs with cushions.
Add in 16 church pews he bought from Richard’s Auto Salvage in Randolph County. Richard’s had saved the pews from a closed United Church of Christ across the road from the salvage yard.
Wyatt already has carpeted the auditorium’s large stage.
The school has its original hardwood floors in its rooms and down the long middle hall. With help from friends and family, the Wyatts have fixed all the plumbing, repaired the wiring, replaced the roof and painted much of the outside woodwork.
Wyatt says the school walls have a surprising three layers of sheetrock. He guesses those layers were good for soundproofing and insulation.
“Everybody I’ve talked to can’t believe the condition it’s in,” Wyatt says of the structure overall. “It’s really in great shape.”
ggg
This past week, Wyatt spent several days steering his Bobcat and digging trenches to drain water away from the building. Mowing also keeps him busy. He relies on a 30-horsepower, 61-inch cut Grasshopper to keep things trimmed.
Another project on the horizon — and there are many — is trying to figure out the best places for visitors to park, though there’s plenty of room.
It’s funny, but after a lifetime of going to school as a student and educator, Larry Wyatt finds himself going to school again.
And loving it.

KANNAPOLIS — A driver was injured early Thursday afternoon when her vehicle left Ebenezer Road and struck a tree, which... read more