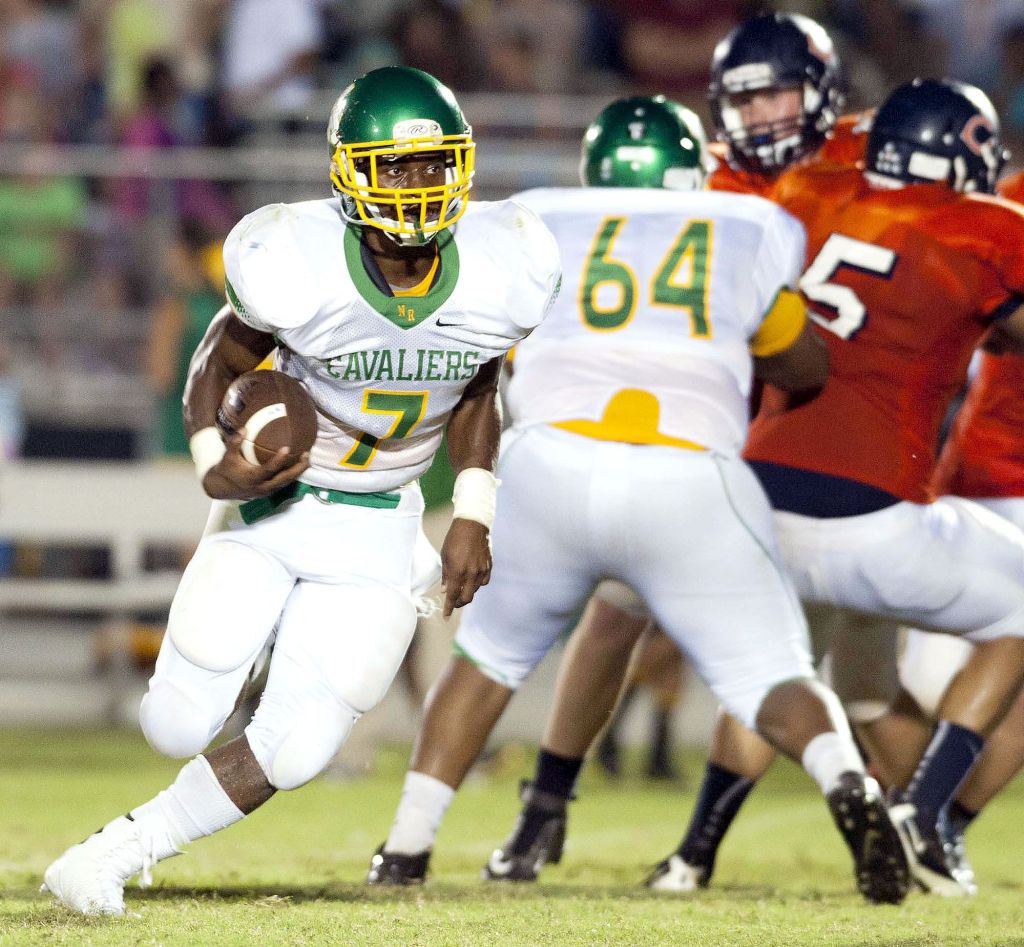 CHINA GROVE — This isn’t the same North Rowan team we saw last year, but it’s getting the same results.

The Cavaliers gave the adding machine another workout Friday at Carson and rolled to a 42-28 Week 2 victory.

“It didn’t look like it at first, but it’s starting to come back,” senior receiver Sakil Harrison said after North Rowan (2-0) racked up 596 total yards. “We’ve had some big shoes to fill. As we start to play together, it’s starting to look pretty good.”

Winning coach Joe Nixon insists the Cavs have a long way to go to match the 2013 team’s magical history tour. But there was much to admire against the Cougars (1-1).

“We did some stuff and had some success,” he said. “I’m proud of our guys. Our passing game opened up a little bit tonight. They had to pick what they were gonna try to stop and we took advantage of it.”

Carson coach Joe Pinyan said North’s video-game speed was a factor, just not the decisive one.

“God Almighty were they fast,” he said with a post-game smile. “This is gonna sound funny but I’m not sure that was the difference in the game. We dropped one when we were wide open. We didn’t recover a fumble over here. We didn’t get one right before the half that we should have. We had a chance.”

The Cougars may have drowned themselves with four turnovers, but North helped fill the pool. Quarterback Alexis Archie passed for 318 yards and four touchdowns. Harrison made nine receptions for 142 yards and scored on touchdown plays of 20 and 24 yards. And two NR running backs — Andra Cowan (129) and Jareke Chambers (122) surpassed a hundred yards on the ground.

“As always, it’s get the ball to our athletes,” Archie said after completing 17 of 23 attempts. “Once we get them the ball they know what to do with it. These guys make my job look easy.”

Chambers, still nursing an ankle injury, became North Rowan’s all-time leading rusher the first time he touched the ball. His 56-yardtouchdown run gave the Cavs a 7-0 lead midway through the first quarter. Late in the game he put North Rowan up 42-20 with a 5-yard touchdown burst.

“They had a good running game, and we don’t have the speed they do,” said Carson’s Darren Isom. “But it’s all a mind thing. If you have a mindset to dominate, you usually dominate. We had it until the fatigue got to us.”

Isom ran for 75 yards and a second-period touchdown, then picked off a fourth-quarter pass. Teammate Brandon Sloop rushed for a team-best 93 yards and closed the scoring when he bulldozed over the goal line with 5:01 to play.

“Isom and Sloop are hard runners. They’re hard to stop,” Pinyan said. “And we threw the ball well. We might have thrown it for more (yards) than we ran it.”

They didn’t, but Cougars quarterback Andy Lear passed for 165 yards — including 111 to receiver Brandon Huneycutt — and two scores. The Cougars trailed throughout and their hopes were dashed when North Rowan defensive back Jaleel Hitchens intercepted Lear’s final pass with 2:12 to play.

“We’ve progressed from the first week,” said Archie. “We’re still building this team, taking it week by week and day by day.”