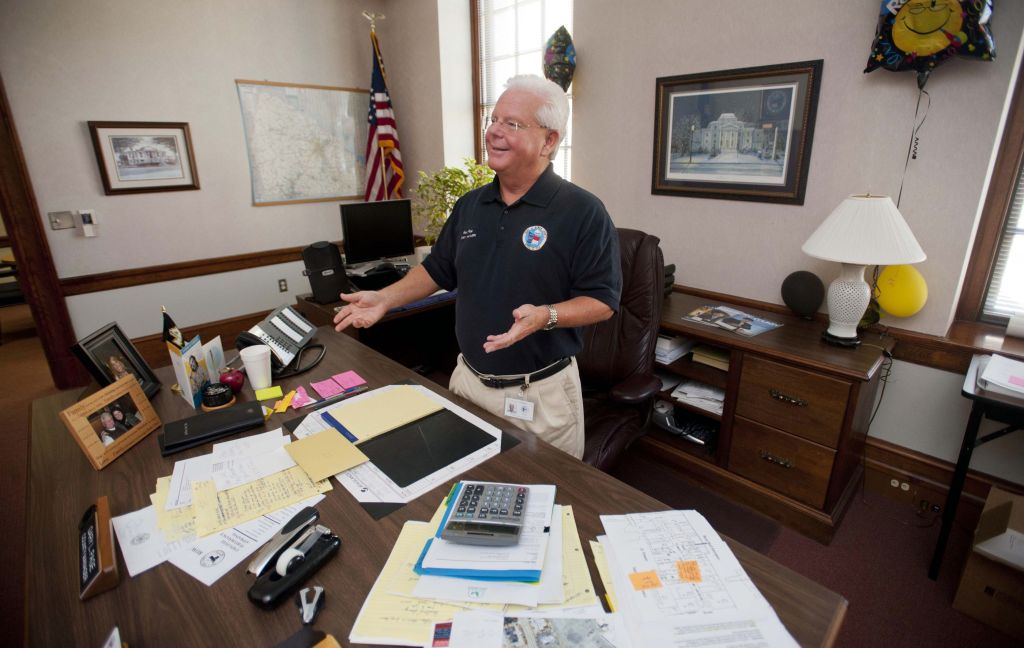 It’s the end of an era for Gary Page.

His work has drawn acclaim from multiple areas of Rowan County and Salisbury. From attorneys to superintendents, it seems that everyone has a nice word to say about Page.

“Gary’s leadership has served our county well in all areas, and I am grateful for the opportunity to have worked with him for the past six years,” said Jay Dees, the attorney for Rowan County government.

“Gary’s management was at all times steady, supportive, friendly, intelligent and fair. His decisions were thoughtful, and made with an eye constantly focused on the singular goal of making our county better … I do wish him well, but most certainly, I will miss working with him.”

Page, 59, started early in politics. At first, it was simply a degree in political science from Appalachian State University. Page, at a professor’s request, entered his school’s program for city and county managers.

He returned home during the summer to work for his hometown of Reidsville — just south of the Virginia state line.

His first job out of school was as an intern in the tax office, but it wasn’t long before Page climbed the ranks. At 24, he was the general manager of Yadkinville, sandwiched between I-77 and Winston-Salem.

After 30 years of serving in administrative roles, both for counties and municipalities, Page, in May 2008, took a job as Rowan’s manager.

“When I came here, I knew that if it lasted three years, five years, or six years, it was going to be my last stop,” Page said. “Rowan was twice as large of a county than I had ever had before.”

Page ranked consolidation of dispatch services as a top accomplishment during his six years. Dispatch consolidation merged city services with county services to prevent any confusion or delay when calling 911, he said.

Rowan County Sheriff Kevin Auten said small technological problems are still being solved at the new 911 center, but overall it was a good decision.

“We’re doing a huge radio upgrade on top of the merger, so it’s like two things at once,” Auten said. “It’s a larger operation and will take another couple of months, but I think it’ll be great for everybody.”

Auten wasn’t the only one who was upbeat about Page’s projects. Rowan economic development director Robert Van Geons said he and Page didn’t always agree on every project, but disagreements never ended poorly.

“I would have to say that he is one of the best county managers I’ve worked with,” Van Geons said about Page. “I’ve always been incredibly impressed by his professionalism, warm and welcoming demeanor and ability to always drive projects forward.”

The county’s mall purchase is one project that’s been a hot button issue in recent months. When describing the story behind the purchase, Page stood by the relatively cheap price of the space.

He said a group of commissioners initially approached him about the idea in September 2013 when confronted with a full Department of Social Services Building.

“Rather than upgrade or build a new Department of Social Services Building, we actually bought the mall for $10 per square foot,” Page said. Page said he supported the commissioners’ idea.

“I saw benefits and was in favor, but you have to recognize that it’s a long-term commitment,” he said.

He said cost of maintenance wouldn’t be an issue if the county maintains its current number of lessees.

“It’s probably the only building that the county owns where someone is paying for the upkeep,” Page said.

His work in county government resulted in one of the most prestigious awards in the state — the Order of the Long Leaf Pine —­ just before retirement. It’s an award presented to individuals that have offered extraordinary service to the State of North Carolina.

But there are some moments Page says he isn’t so proud of.

But failures haven’t prevented him from being optimistic about the future.

The Rowan County Board of Commissioners could vote on the next county manager as early as Tuesday — its next meeting. When the new manager comes on board, Page says county finance manager Leslie Heidrick will help train and ease the transition.

As for Page, he says he plans to spend his time working toward the cleanest car, best-kept yard and becoming the second biggest Appalachian State University fan. His wife is the No. 1 Mountaineers fan, Page says.

His departure is a bittersweet moment, Page says, but he’s excited about the future.