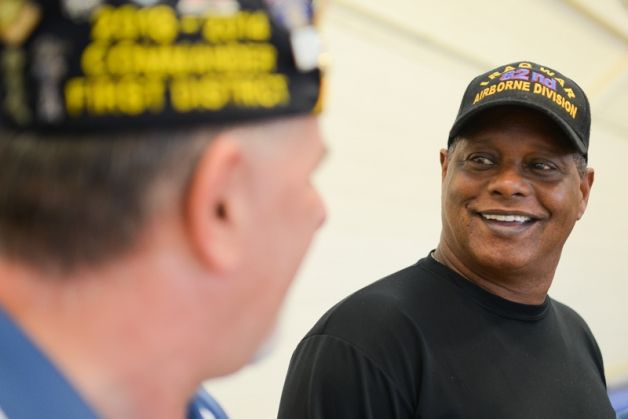 While serving in Kandahar, Afghanistan, in 2004, Army Special Forces veteran Roy Wilkins lost his left leg to an improvised explosive device that killed his comrade. He was pulled from the Humvee wreckage, stabilized and transferred to Germany to recover, and he always wondered for the past 10 years who saved his life.

On Aug. 25, Wilkins crossed paths with the retired Army trauma nurse who pulled him from the wreckage — Legionnaire Keith Melick of Leavenworth, Kan.

The encounter happened when Melick, a member of Post 23 and the Legion’s Veterans Affairs & Rehabilitation Commission, helped deliver Operation Comfort Warrior donations to veterans at the W.G. (Bill) Hefner VA Medical Center in Salisbury during the Legion’s 96th National Convention in Charlotte. When Melick walked into the gymnasium, he saw Wilkins and the two began talking, sharing military stories. That’s when they both realized their paths had crossed on the battlefield.

“Man, this is amazing,” said Wilkins of Winston-Salem. “The Lord works in mysterious ways.”

Melick was attached to Wilkins’ Special Forces unit during the mission when his Humvee hit the IED. “I am the medic that pulled him out,” Melick said. “This is awesome to meet him again. Just amazing.”

Wilkins said the last words Melick spoke to him were, “I am not going to leave your side.”

To hear those words again, Melick got chocked up and asked Wilkins if he was a Legionnaire. He is not, and Melick vowed to pay his dues for the next year.

“I take care of you from start to finish,” Melick said to Wilkins.

This article is reprinted courtesy of the American Legion from www.legion.org.