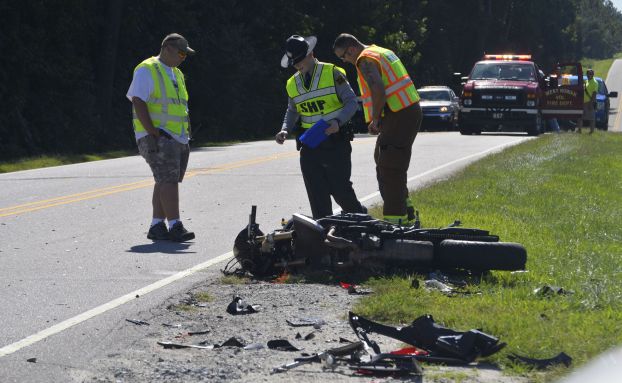 A motorcyclist was taken to the hospital Wednesday after a three-vehicle collision outside the gates of Lazy 5 Ranch on Mooresville Road. The drivers of the other vehicles were not injured, N.C. Highway Patrol troopers said.
According to Trooper R.P. Charubini, the motorcyclist was traveling west on Mooresville Road when he struck the right rear of a F-150 pickup, driven by Jamie Starks, of Mount Holly.
Starks was traveling east on Mooresville Road and was making a left hand turn into Lazy 5 Ranch, the trooper said. The crash occurred at 3:12 p.m.
A third vehicle, a Chevrolet Impala, driven by Megan Goldman, of Matthews, was driving behind the pickup about to make the same left turn.
After striking the truck, the motorcycle hit the passenger car and the motorcyclist was thrown from the bike. He was taken to Carolinas Medical Center NorthEast.
The motorcyclist was a wearing a helmet. It is not clear if speed was a factor, but Goldman said a witness who stopped to check on them told her the biker had been speeding before he crested the hill not far from the entrance of Lazy 5 Ranch.
Goldman said she was on her way to take her brothers and a friend to Lazy 5 when the crash happened.
She said it all happened so fast that after the motorcycle clipped the truck it “went flying into my car.”
She said the others in her car said it felt as though the motorcycle ran under the front part of her car.
The motorcyclist was talking at the scene, she told a Post reporter. He complained of being hot so they poured water on his head to cool him down. She said a nurse, who she believed worked at the ranch, was also there assisting him. Goldman said she called 911.
She said her brother, who has a developmental disability was excited to go to Lazy 5 and she was spending some time with him for the week. A volunteer firefighter took her brother and friend inside Lazy 5 while Goldman waited for a wrecker service. The group drove about an hour to get to the park. It was their first time.
The trooper said the investigation continues.
Contact reporter Shavonne Potts at 704-797-4253.