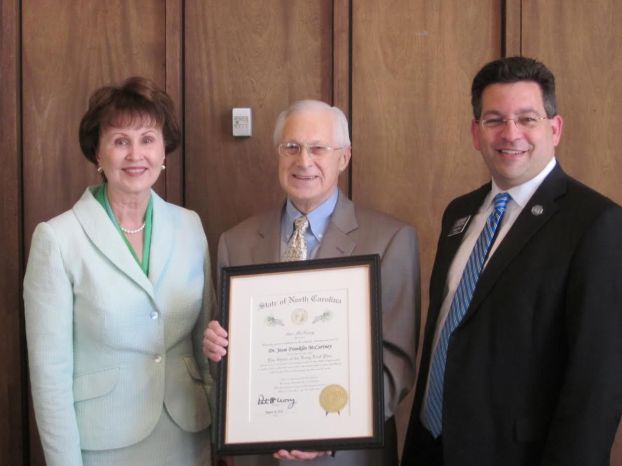 Dr. Jesse McCartney, a professor emeritus of English and former provost at Catawba College, returned Tuesday to the campus where he spent 26 years of his professional career in higher education. McCartney was presented with North Carolina’s highest civilian honor, the Order of the Long Leaf Pine, by Dr. Hope Williams, the president of the North Carolina Independent Colleges and Universities (NCICU) during a NCICU-hosted reception held in his honor at Peeler-Crystal Lounge.
Williams nominated McCartney to receive the award for his 30 years of service to North Carolina which included not only his work at Catawba, but his most recent contribution of service as statewide coordinator of the NCICU’s annual Ethics Bowl. In February, the NCICU Ethics Bowl will enter its fourth year. At the Ethics Bowl, four-student teams from some of the 36 NCICU member institutions compete against each other to consider case studies and develop ethical resolutions to the questions raised by the cases.
In making the presentation to McCartney, Williams noted his consistent willingness to help when asked.
“Jesse and Dr. Knott (former president of Catawba College) were some of the first people I met when I joined the NCICU in 1986,” she said. She noted that the award she was presenting to Dr. McCartney was actually signed by Catawba alumnus N.C. Gov. Pat McCrory, who graduated in 1978.
Catawba President Brien Lewis joked that he was the first to congratulate McCartney for being named an ambassador for North Carolina.
“We are privileged to celebrate a singular milestone for a singular individual,” he added.
McCartney shared brief remarks with family, friends and former coworkers gathered. He called Catawba his “second home” and shared a story he remembered former Catawba trustee and Cheerwine founder, the late Clifford Peeler, telling. The story was about a turtle discovered perched atop a fence post who explained, “One thing’s for sure, I didn’t get up here by myself.” McCartney likened himself to the turtle and credited his family and colleagues with helping him rise in his career and in his service to the state.
Of his wife, Kay, whom he married almost 55 years ago, McCartney said, “She’s like my American Express card, I don’t leave home without her.” He also recognized his two children who were present for the reception — Amy, who lives in Winston-Salem, and Robert, who lives in Nashville, Tenn.
McCartney recalled, “growing up in Oklahoma where there were hardly any trees, let alone long-leaf pines,” and how he joined the late Dr. Stephen Wurster, his faculty colleague at Ball State University, in making the trip to North Carolina and Catawba College. Wurster served as president of Catawba and McCartney joined his staff as vice president for administration and planning in 1982.
“I am deeply honored to have lived and worked among you in the Old North State,” he concluded.
McCartney earned his bachelor’s degree in language arts from Oklahoma State University, and his master’s degree and doctorate in English from the University of Arkansas. He served as a graduate assistant and instructor of English at the University of Arkansas before his service at the University of Southern Mississippi as an assistant professor and later a tenured associate professor of English and director of freshman English.
At Ball State University, McCartney was director of the Office of Instructional Development and later served as acting dean of academic planning and faculty development and director of the Office of Instructional Development. At Catawba College, McCartney’s roles were many and varied. He served as professor of English during his 26 years of service, as well as vice president for administration and planning, vice president for academic affairs and dean of the college, director of institutional research, chairman of the English Department, executive assistant to the president, and as provost.
Catawba honored McCartney twice during his tenure as the recipient of the Trustee Award for outstanding contribution to the college in 1990 and again in 2003.
A member of First United Methodist Church in Salisbury, he has served his church as a member of the building committee and chairman of the new building fund committee, as chairman of the staff-parish committee and as a member of the finance committee and administrative board. He has served as a board member and officer of the Salisbury Civitan Club, as a board member and president of Rowan Homes, Inc., and as a board member for the Salisbury-Rowan Symphony Society.

Your daily look at late-breaking news, upcoming events and the stories that will be talked about today: 1. TOUGH ISSUES... read more