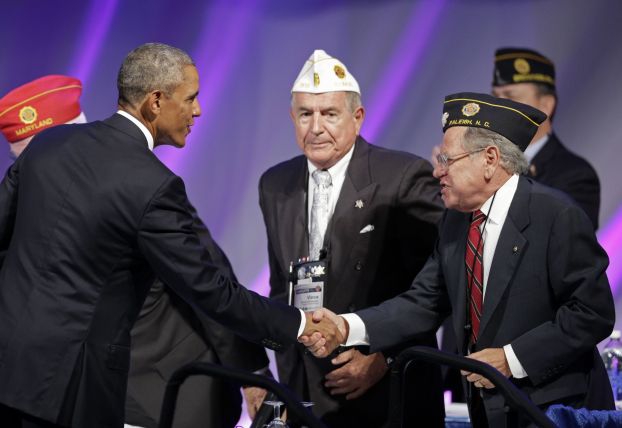 CHARLOTTE (AP) — The scandal at Veterans Affairs medical centers has touched a nerve with Robert McCauley.
The 67-year-old retired sergeant says his friends have complained over the years about the long wait to see VA doctors.
So the Cary, North Carolina, veteran listened carefully Tuesday when President Barack Obama addressed the VA’s problems at the American Legion National Convention in Charlotte.
The president defended his administration’s response to lapses that delayed health care for thousands of former service members, but conceded that more must be done to regain their trust.
Afterward, McCauley said he was more optimistic.
“He’s right — a lot of veterans have lost trust in the VA,” said McCauley, a Vietnam veteran who spent 26 years in the Army. “But I think with the president pushing the way he is, I think a lot of change is going to come.”
The weeklong convention of the nation’s largest veterans group also drew other politicians Tuesday. After the president, North Carolina’s Republican U.S. Sen. Richard Burr addressed the legionnaires, followed by Democratic U.S. Sen. Kay Hagan, who is facing a difficult re-election.
Hagan has sought to distance herself from Obama’s policies, declaring as recently as Friday that his administration had not “done enough to earn the lasting trust of our veterans.”
But Hagan and Burr were at the North Carolina Air National Guard Base to greet Obama. She welcomed the president warmly and he gave her a peck on the cheek.
Obama’s speech before the group touched on foreign policy issues, including the escalation of violence in Iraq. He assured legionnaires that “American combat troops will not be returning to fight in Iraq.”
But clearly the focus was on the VA scandal and the latest administration response to the health care uproar that led to the resignation of Veterans Affairs Secretary Eric Shinseki in May.
The president declared that the nation owes veterans for their service and that the lengthy wait times and attempts to hide scheduling flaws were “outrageous and inexcusable.”
He promised “a new culture of accountability” under new Secretary Bob McDonald.
He also announced steps to strengthen access to mental health care for members of the military, improve the transition for those leaving the military from care administered by the Defense Department to that run by Veterans Affairs, and foster suicide prevention and better treatments for post-traumatic stress syndrome.
Earlier this month, Obama signed a $16.3 billion law aimed at easing the long waits that tens of thousands of military veterans had endured to get medical care.
Jerry McClough, 44, of Greensboro, said Obama was being more proactive in supporting veterans.
“He’s taking steps to ensure that veterans will receive the mental health counseling they need,” said McClough, who served 10 years in the Marine Corps.
Hagan told the legionnaires that the administration has taken some positive steps. But Hagan said she also warned Obama “that promises alone aren’t going to get it done.”
“The Obama Administration must understand that we need a complete change in culture at the VA,” she said. “The Obama Administration has a long road ahead to restore the faith and trust of our veterans.”
Then she turned her attention to the GOP-controlled General Assembly in Raleigh. Her Republican opponent is state House Speaker Thom Tillis.
Tillis’ campaign has labeled Hagan a “rubber stamp” for Obama and called her “compliant with the administration’s failure to provide our veterans with the health care that they deserve.”
Hagan recounted that when she was in the legislature, she fought to outlaw payday lending that “targeted military bases in our state.”
But she said she was disappointed with “repeated efforts by our current state legislature to make it easier for predatory lenders to take advantage of hard-working military families.