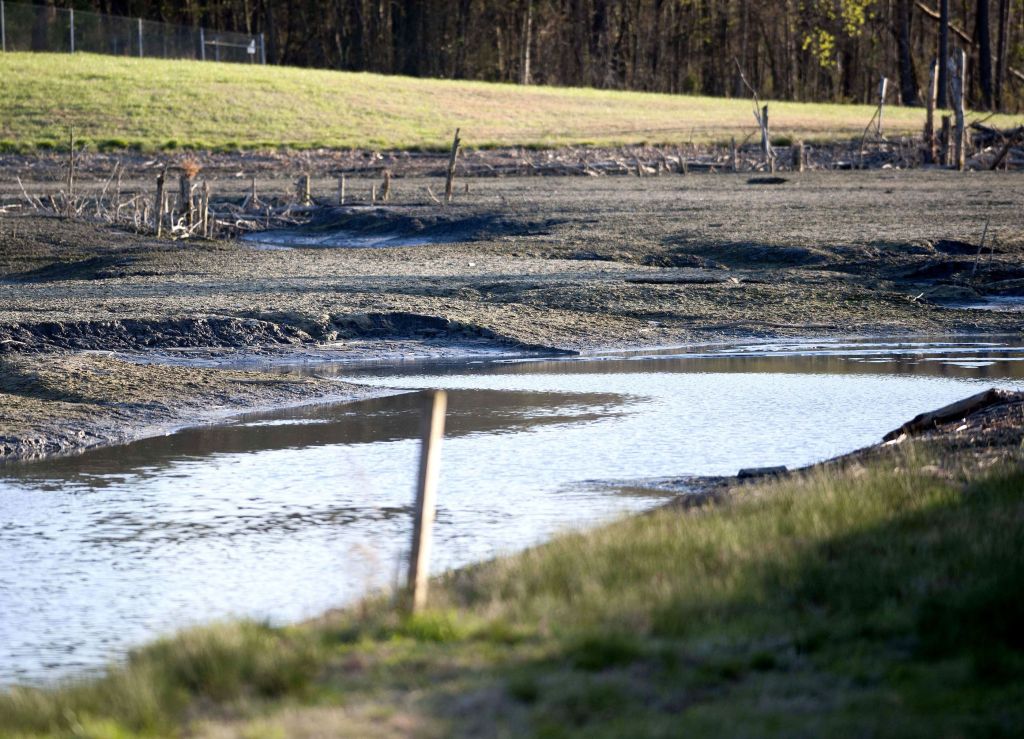 RALEIGH (AP) — North Carolina environmental officials moved Tuesday to fine Duke Energy over pollution that has been seeping into the groundwater for years from a pair of coal ash dumps at a retired power plant outside Wilmington.
The state Department of Environment and Natural Resources issued a notice of violation to Duke over the ongoing contamination at the L.V. Sutton Electric Plant in New Hanover County. The site includes a pair of unlined dumps estimated to hold 2.6 million tons of ash.
The notice of violation is the first regulatory step toward fining the utility for violating the state’s groundwater contamination laws.
The state says monitoring wells near Duke’s dumps at Sutton showed readings exceeding state groundwater standards for boron, thallium, selenium, iron, manganese and other chemicals. Thallium was used for decades as the active ingredient in rat poison until it was banned because it is so highly toxic.
The agency refused Tuesday to immediately provide the Associated Press the monitoring reports used as the basis of the enforcement action. Those documents are public records under state law.
“Administrative staff in Raleigh are conducting a final analysis of the data before confirming and making public all of the results,” said agency spokesman Jamie Kritzer. “The final data will be used to determine the extent of the violations and any penalties assessed.”
Duke spokeswoman Erin Culbert suggested Thursday that some of the chemicals cited by the state, such as iron and manganese, could occur naturally in the soil. She did not specifically address the thallium readings.
“We understand the importance of protecting groundwater near our facilities, which has driven the company’s monitoring program, previous studies and work toward closing ash basins,” Culbert said.
The state sued Duke in state court last year after a coalition of environmental groups gave notice they intended to take the company to federal court for violating the Clean Water Act. In its court filings, state officials said all 33 of Duke’s coal ash dumps statewide are contaminating groundwater.
Duke is fighting the state in court and there are no dates yet scheduled for when the cases may go to trial.
As the case drags on, state Water Resources director Tom Reeder said his agency would use its authority under state law to start fining Duke up to $25,000 a day.
“We said in court last year that the groundwater around the Sutton Plant was contaminated by Duke’s coal ash ponds,” said Reeder, who wrote and sent the notice Tuesday. “But as the legal process for stopping the violations drags on, we will take what action we can using our existing authority to hold the utility financially accountable for damaging the public resource.”
Duke has 15 days to respond in writing to the violation notice from the state.
Duke and state regulators have faced intense scrutiny after a massive Feb. 2 spill from one of the company’s ash dumps in Eden coated 70 miles of the Dan River in gray sludge.
State water quality officials knew for years about the contamination at Sutton’s unlined ash pits, but took no enforcement action until August 2013 — after the citizens groups tried to sue Duke.
The company is required to collect and test samples from monitoring wells ringing its dumps at Sutton and 13 other coal-fired power plants. Testing data previously released by the state shows wells at the Wilmington plant exceeded state groundwater standards for thallium on at least 20 occasions since 2011.
In September 2010, part of the earthen dike at one of Sutton’s coal-ash dumps collapsed after a heavy rain, spilling waste down an embankment.
Though Duke denies its coal ash dumps pose a public threat, the company agreed in October to pay at least $1.5 million to help cover the cost of running new water lines to a nearby neighborhood where residents relied on well water.
Culbert, the Duke spokeswoman, said Tuesday there was no public health threat to the residents, but the company paid for the water lines to “give them peace of mind for the future.”
Sutton is one of four Duke plants designated as “high risk” in a coal ash cleanup bill passed earlier this month by state lawmakers. The bill requires Duke to remove all of the ash stored at Sutton and move it to lined landfills by 2019. Gov. Pat McCrory has not yet signed the bill into law, though he recently said in a televised interview he is likely to.