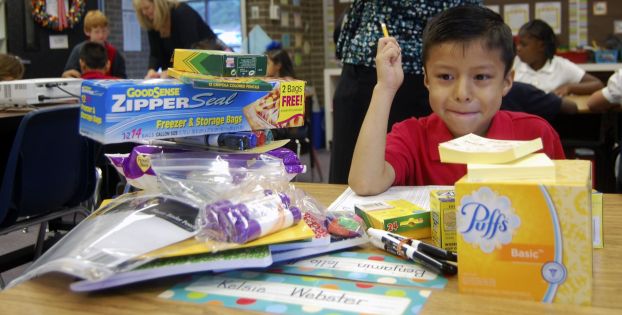 KANNAPOLIS — Ann Cline and Rebecca Knipp greeted students with huge smiles and hugs Tuesday morning at Fred L. Wilson Elementary School in Kannapolis.
“Have a sweet year,” they told the children — a fitting sentiment since the two teachers were dressed as bags of Skittles candies.
Cline and Knipp wore clear trash bags stuffed with brightly colored balloons.
The pair’s excitement for the first day of school was echoed by the students, teachers and administrators, especially Superintendent Dr. Pam Cain.
“We always have a standard of excellence,” she said, but added the district will focus on literacy, math achievement, creating a welcoming environment for parents and the community and helping children becoming self-determined.
Half of the district’s principals are either new or at different schools this year, and Cain said she loved the new leadership team’s “energy and can-do attitude.”
Mandi Campbell and Kenneth Bowan, principals of Fred L. Wilson and A.L. Brown respectively, are the district’s brand new principals. Nick Carlascio transferred from Jackson Park to Forest Park, and Erin Anderson transferred from Fred L. Wilson to Jackson Park.
“I don’t feel like a new principal because I’ve been here before. It’s been an easy transition for everyone,” said Campbell, who served as the school’s curriculum coordinator before becoming principal.
“It’s what I’ve wanted to do my entire life,” she said.
She said she hopes to maximize instruction time, increase parent and community involvement and be an effective communicator at Fred L. Wilson.
Teachers and administrators weren’t the only ones excited about the new school year — students were also excited about the new year.
Second-grader A’nizhae McCauley said she was excited to come to school, because she wants to learn and read.
But McCauley added that she thinks she’ll have more homework this year.
Her classmate, Colby Ruben, said he was looking forward to having a good day.