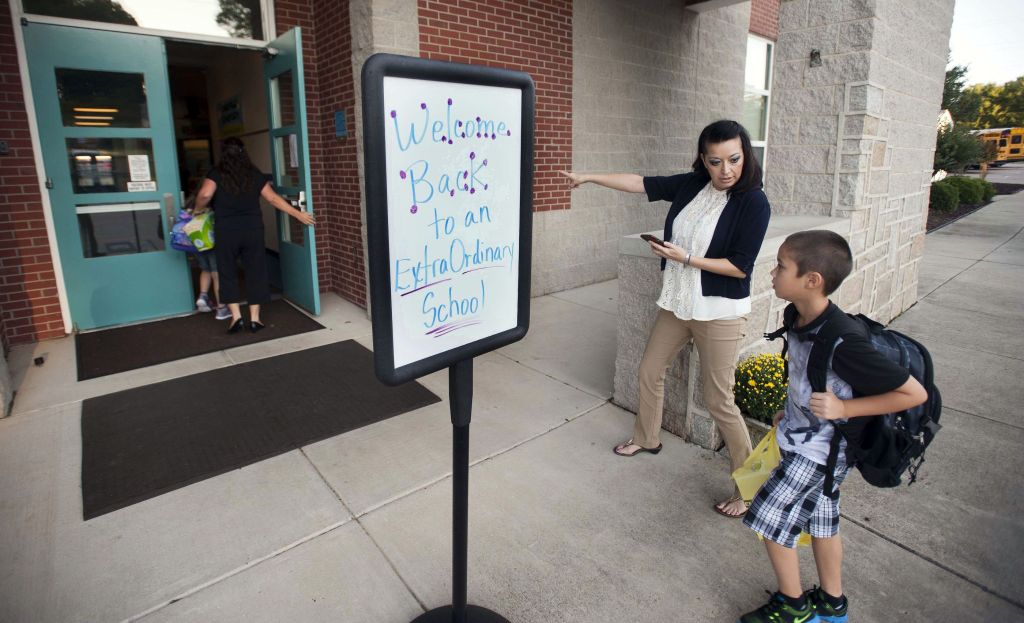 The first day of school means different things for different people, and that’s no exception for the roughly 20,000 students that descended upon the Rowan-Salisbury School System’s 35 schools Monday.
For some it meant new schools, shoes, pencils or beginnings and for others it meant nerves or even tears.
Students in Katie Pethel’s kindergarten class at Enochville Elementary School chattered happily with each other, writing their names, drawing pictures and sharing pencils and crayons.
“It’s interesting to hear what they want to learn,” said Pethel, who’s a seventh year teacher.
“It’s so exciting because they’re on different levels,” she said, adding that it “makes for an interesting year.”
Right next door, Superintendent Dr. Lynn Moody read “First day, hooray!” to Tiea Goodnight’s first grade class, asking them questions as she went along.
“I love reading,” one student exclaimed.
“I’m excited and just glad to see them here,” Goodnight said. “They seem excited too.”
Tonya Kepley’s fourth grade classroom is bright and colorful. The walls are painted, and custom curtains hang from the windows – even the tables, chairs and bookcases are bright shades of purple, green, magenta and cyan.
“It looks like a fun classroom,” said Alyssa Jones.
Cheyanne Hunter said she is looking forward to getting an iPad to use later this year.
Brandon Wilson said he woke up Monday morning thinking, “I’m ready to go to school.”
He added that he’s especially excited about physical education because he likes playing football and baseball.
At the end of the day, Salisbury High School students and staff were in equally high spirits.
Halle Cowan couldn’t sleep last night.
“I was excited,” the high school senior said.
“I was ready. I got up real early. I got to school really excited,” added fellow senior Shyla Snowden.
Both girls were excited to graduate at the end of the year.
“I’m ready to start filling out college applications,” Snowden said
Caroline Parrott, a junior, said the first day of school was great. “I got to school and the nerves went away.”
“It was refreshing to see some changes that needed to take place.”
“It was different. Mr. Brown has new rules,” said Grace Yatawara. “I just want to see positive changes.”
Principal Luke Brown said a he and his team did a lot of planning over the summer, and that there will be “an emphasis on higher expectations” for students this year.
It was “possibly one of the smoothest starts to a school year I’ve had as an administrator,” he added.
“I look forward to seeing my freshman homeroom in the morning and to see their perception first thing,” said Leigh Miller, a CTE business teacher.
Lovetta Moore celebrated her 27th first day of school as a teacher Monday.
“I think every teacher is excited on the first day of school,” she said.
Moore said she looks forward to the new technology they will be using in the classroom this year.
“It’s going to be like year number one for me again,” she added.
Moody said she couldn’t really sleep Sunday night because she was excited..
“I hate to keep using the word ‘excited,’ but that’s what it is. I’m excited,” she said, adding, “That feeling of the first day of school really doesn’t ever go away.”
“It’s absolutely amazing that 20,000 students can show up and 3,000 employees and within 10 minutes, teaching and learning is happening in the classroom,” Moody said.