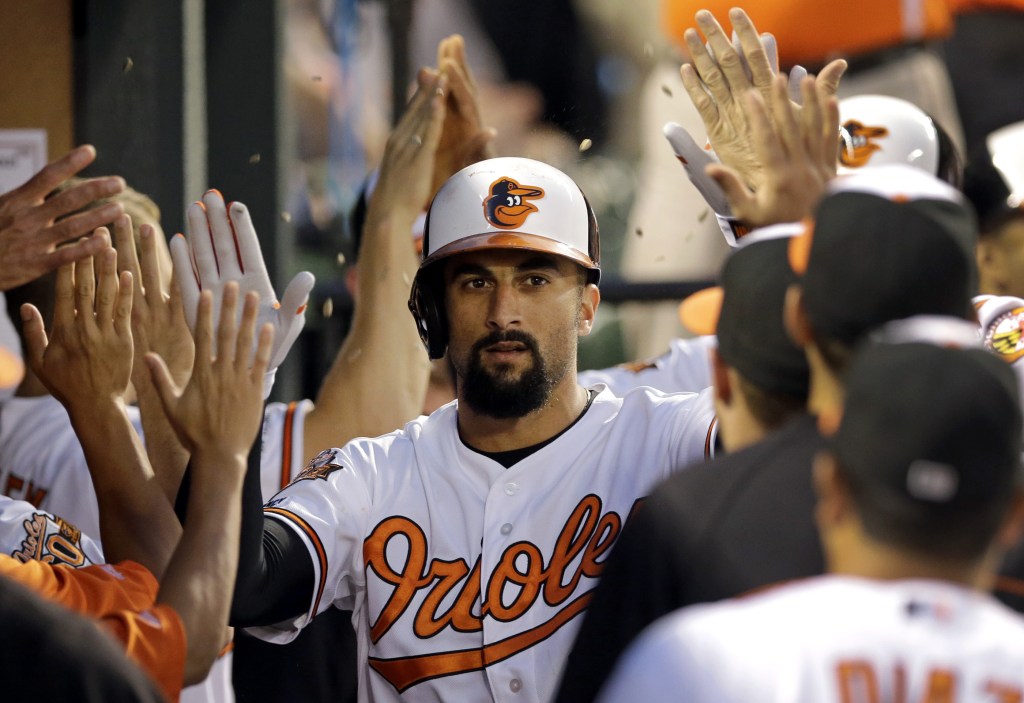 By The Associated Press
BALTIMORE (AP) — Delmon Young, J.J. Hardy and Chris Davis homered in succession during a six-run fifth inning, and the Baltimore Orioles cruised past the Tampa Bay Rays 9-1 Monday night to end a three-game losing streak.
Baltimore hit five homers in all, four off rookie Jake Odorizzi (9-11). Nick Markakis and Steve Pearce delivered back-to-back shots in the third to spark the Orioles to their ninth win in 13 games against Tampa Bay this season.
After totaling four runs and 13 hits in three road losses to the Chicago Cubs, the Orioles got 14 hits against a Tampa Bay staff that had a major league-best 2.28 ERA since the All-Star break.
Baltimore’s Chris Tillman (11-5) yielded an unearned run and three hits in seven innings.
RED SOX 4, BLUE JAYS 3, 10 innings
TORONTO (AP) — Yoenis Cespedes singled home the go-ahead run in the 10th inning and the Red Sox survived a ninth-inning collapse to beat the Blue Jays 4-3, snapping their losing streak at eight games.
Cespedes has 19 RBIs in 22 games since being traded to Boston on July 31. Seven of those 19 RBIs have given the Red Sox a lead.
Brock Holt hit a one-out single off Aaron Sanchez (2-1) in the 10th and stole second as Dustin Pedroia struck out, with the steal confirmed by video review. Holt stole third before Cespedes drove him in with a single up the middle.
Boston won for the first time since August 16 against Houston and snapped a six-game skid against the stumbling Blue Jays, who dropped to 6-15 in August.
Koji Uehara (6-4) got the win despite blowing his fourth save in 30 chances, and Craig Breslow finished for his first save in two chances.
YANKEES 6, ROYALS 1
KANSAS CITY, Mo. (AP) — Derek Jeter drove in two runs in his final scheduled trip to Kauffman Stadium, backing a sharp outing from Michael Pineda and helping the Yankees beat the Royals for their fifth straight win.
Jacoby Ellsbury drove in a run in the seventh inning with the 1,000th hit of his career, then added a two-run homer in the ninth. Stephen Drew and Martin Prado also homered for New York.
Pineda (3-2) gave up a solo shot to Mike Moustakas leading off the third inning, but that was about it in his third game back from the disabled list. Pineda struck out five without a walk in 6 1-3 innings to win for the first time since beating the Cubs on April 16.
James Shields (12-7) allowed six runs over 6 2-3 innings for Kansas City.
PHILLIES 3, NATIONALS 2
PHILADELPHIA (AP) — A.J. Burnett struck out 12 in seven innings and Cody Asche and Carlos Ruiz homered to lead the Phillies to a victory over the Nationals.
Domonic Brown had two hits and an RBI for Philadelphia, which won for the fourth time in five games.
Wilson Ramos and Anthony Rendon homered for NL East-leading Washington, which lost for just the second time in 14 games.
Burnett (7-14) won for the first time since the All-Star break, allowing one run on three hits with just one walk. The right-hander entered leading the majors in walks with 76.
Tanner Roark (12-8) gave up two runs on five hits in six innings and lost for just the second time in his last nine starts. Roark has a 2.25 ERA over that stretch.
CARDINALS 3, PIRATES 2
PITTSBURGH (AP) — Matt Holliday’s two-run single in the seventh inning off Jared Hughes capped a late rally, and the Cardinals beat the Pirates.
Jon Jay’s pinch-hit single tied the game with two outs in the seventh and Holliday followed with a sharp single to left off Hughes (6-4) to score Jay and Matt Carpenter.
John Lackey (13-8) worked out of trouble early to work seven innings and pick up his second victory with the Cardinals after arriving in a trade from Boston on July 31. Trevor Rosenthal gave up a leadoff home run in the ninth to Andrew McCutchen but held on to earn his 39th save.
Pedro Alvarez hit his 18th homer in the second off Lackey, but the Pirates managed little after that to fall further behind St. Louis and first-place Milwaukee in the NL Central race.
ATHLETICS 8, ASTROS 2
HOUSTON (AP) — Jeff Samardzija pitched eight solid innings and Josh Donaldson drove in three runs to lead Oakland over Houston.
Samardzija (4-3) allowed six hits, two runs and tied a season high with 10 strikeouts to bounce back from a two-game skid in which he yielded 11 runs combined. The right-hander was 2-7 with the Chicago Cubs before an early July trade.
Josh Reddick hit a two-run homer and Donaldson had three hits after sitting out Sunday with a knee injury. Donaldson doubled twice for his first extra-base hits and RBIs in his last nine games.
Chris Carter hit a two-run homer in the eighth to pull the Astros within one, but the A’s added five runs in the ninth after reliever Tony Sipp walked all four batters he faced.
Scott Feldman (7-10) allowed seven hits and three runs in seven innings.