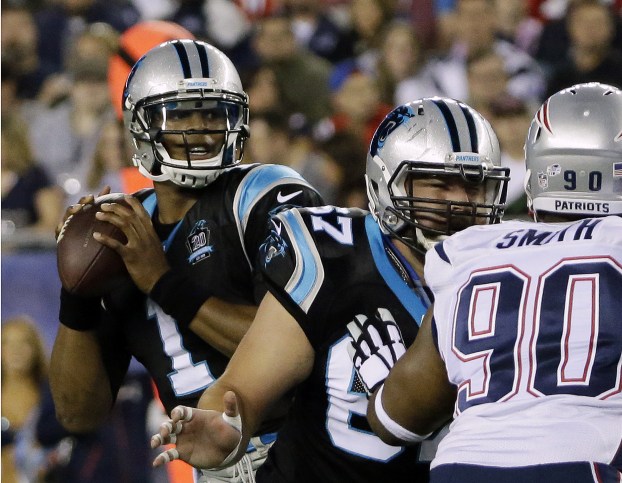 CHARLOTTE, N.C. (AP) — The concerns are mounting for the Carolina Panthers with the regular season opener less than two weeks away.
Quarterback Cam Newton is still walking gingerly after suffering a hairline fracture in his ribs. Middle linebacker Luke Kuechly, last year’s AP defensive player of the year, is likely to will start the season with a cast on his sprained right thumb. And starting defensive ends Greg Hardy and Charles Johnson, who combined for 26 sacks last season, remain sidelined with injuries.
The Panthers are also trying to figure out what went wrong in a 30-7 loss to New England Patriots on Friday night.
But coach Ron Rivera downplayed those issues on Monday.
“That’s the nature of the game,” said Rivera, the NFL Coach of the Year in 2013. “This could happen in the regular season and we have to adapt. It’s basically the next man up.”
Newton won’t play in Carolina’s preseason finale Thursday night against Pittsburgh.
Rivera offered no update Monday on Newton’s status, reiterating that the Pro Bowl quarterback will be reevaluated at the end of the week.
It’s still unclear if Newton will play in Carolina’s Sept. 7 regular season opener against Tampa Bay. Rivera had said Sunday he expected Newton to play.
Newton was not made available to reporters on Monday.
With backup quarterback Derek Anderson’s wife expecting a baby — she was due on Saturday — and fourth-string quarterback Matt Blanchard out with a concussion, it is possible Joe Webb could be the only quarterback available to play Thursday night.
“We’ll play it by ear,” Anderson said of his plans for Thursday night. “I’m not 100 percent sure what’s going to happen. There’s nothing that we can control. … Hopefully I can be there for both.”
Of course, the preseason is the least of Carolina’s concerns.
The Panthers are already looking ahead to Tampa Bay, spending the two last days game planning for their NFC South rivals behind closed door practices.
Anderson has been working with the starters with Newton looking on closely and taking “mental reps,” according to Rivera.
The Panthers could have worse options at quarterback if Newton can’t play.
Anderson has started 43 career games during his nine NFL seasons and even went to a Pro Bowl with the Cleveland Browns in 2007 when he threw for 3,787 yards and 29 touchdowns.
But he might need to shake off some rust first.
Newton has not missed a game in three seasons, and Anderson has only thrown four passes for the Panthers during that span.
Anderson’s last start came in 2010.
“I’m putting in the same preparation I go through every year for the last 10 years,” Anderson said. “I’m preparing to get ready to play and know my opponents and their tendencies. … If I’ve got to (play), I’ve got to play — and try and win a football game.”
Rivera said the Panthers game plan for Week 1 will be the same regardless of who’ll start at quarterback.
As for the other injuries, Rivera said he’s not concerned about the cast affecting Kuechly’s play and said Hardy and Johnson have been working on the side during practice and are rounding into shape. Hardy has been bothered by a shoulder injury and Johnson a strained hamstring.
The Panthers did get some good news this week as two defensive starters — safety Roman Harper and linebacker Chase Blackburn — returned to work. Harper has been out for several weeks with a turf toe injury.
The Panthers are looking to avoid another slow start under Rivera.
Rivera’s first two teams both started 2-8 and failed to make the playoffs.
The Panthers opened 1-3 last season and appeared headed down the same road but turned things around and won 11 of 12 games to capture the NFC South championship and earn a first-round bye in the playoffs.
NOTES: Tight end Greg Olsen spent Monday with his 2-year-old son T.J., who is undergoing his third and final scheduled open heart surgery. T.J. was born with a congenital heart defect. His first surgery came two days after he was born and another last summer.
———
AP NFL websites: www.pro32.ap.org and www.twitter.com/AP—NFL