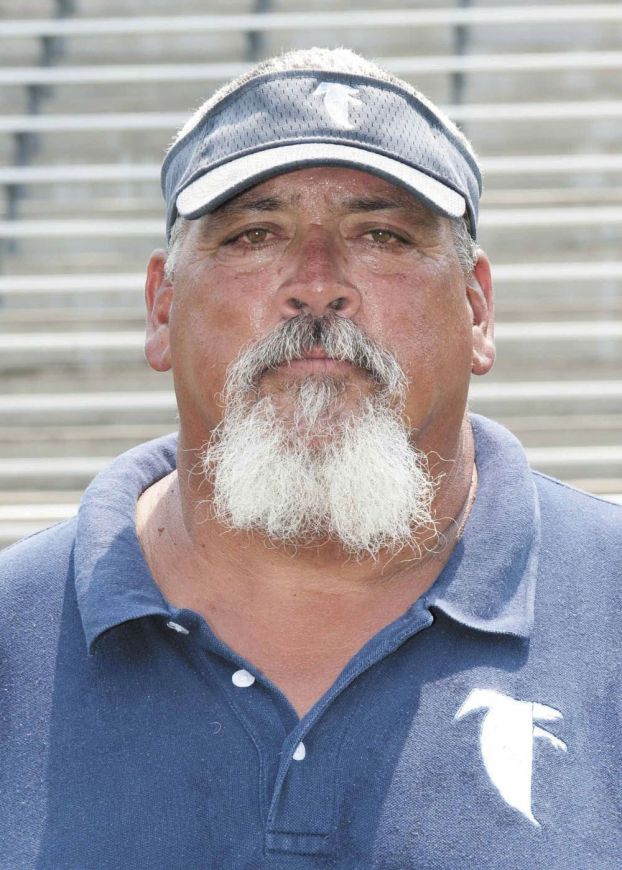 Oron Earnhardt was in a driver’s education car not too long ago. As he drove by West Rowan, he spotted Darrell Misenheimer cutting grass. Earnhardt, who coached Misenheimer in football and track at East Rowan in the ‘70s, stuck his hand out the window and waved at his friend.
“I didn’t know at the time I was waving him bye,” Earnhardt said Tuesday evening.
Misenheimer died Tuesday morning in a fatal single-car accident on Sherrills Ford Road. He was 57.
“I got the phone call (Tuesday) morning, from Oron Earnhardt, and I was in total shock,” said W.A. Cline, former head football coach at East Rowan. “…He was going to work like he did every day. It was just tragic.”
Misenheimer, a 1975 graduate of East Rowan, was a legend on the fields of Rowan County. He played in the 1974 Shrine Bowl of the Carolinas after his senior season. Competing in the Western N.C. High School Activities Association, Misenheimer was the state runner-up in wrestling as a heavyweight and the state champion in shot put. His personal best with the 12-pound shot was 61-51/2.
“He was the hardest-working person I ever had in the weight room,” Cline said.
After his senior season, The Charlotte Observer named Misenheimer its male athlete of the year for all of North Carolina.
The shot put produced a lasting memory of Misenheimer for Earnhardt and Cline. One day, Earnhardt and Misenheimer were practicing in East Rowan’s gym with an indoor shot. Throw after throw bounced from one end of the court to the other. The gym featured a scoreboard that hung over the court. Earnhardt and Cline both said Misenheimer launched one of his throws into the scoreboard. It took a trip up a ladder to get it out.
“There was just something special about Darrell,” Earnhardt said.
After he graduated from East Rowan, Misenheimer went on to play three seasons of college football at Clemson. As a freshman, he logged time with both the freshmen and the varsity teams.
Misenheimer was also an excellent slow-pitch softball player. He played catcher and swung a big bat; once hitting six home runs in one game. Around the turn of the millennium, the United States Slow Pitch Softball Association inducted him into its hall of fame. In a Salisbury Post story about the induction, Misenheimer estimated he hit between 2,000 and 3,000 home runs in his career.
“When you play 150 games a year, it’s not hard to get that many,” he said.
Misenheimer also served as an assistant football coach at East Rowan, South Rowan and West Rowan.
“I was lucky when I came over to South Rowan to get to work with him,” Earnhardt said. “That was extra special.”
Misenheimer joined Scott Young’s staff at West Rowan in 2000. He was there during the Falcons’ run of three consecutive N.C. High School Athletic Association 3A state championships from 2008-10.
While the on-field accomplishments were numerous and extraordinary. those were only a part of who Misenheimer was.
He was hard-working man. Earnhardt said Misenheimer’s determination came from his mother and father.
“He was just a tremendous person,” Cline said.
Three people described Misenheimer as a gentle giant.
He was also humble. Cline said Misenheimer became quiet when people talked about his many athletic accomplishments.
Though his competitive side was always there.
“Darrell on the field could be fired up, but he always had the ability to hug you up, love you up and build you up,” Young said. “He was just great with kids. Our students loved Coach Mis.”