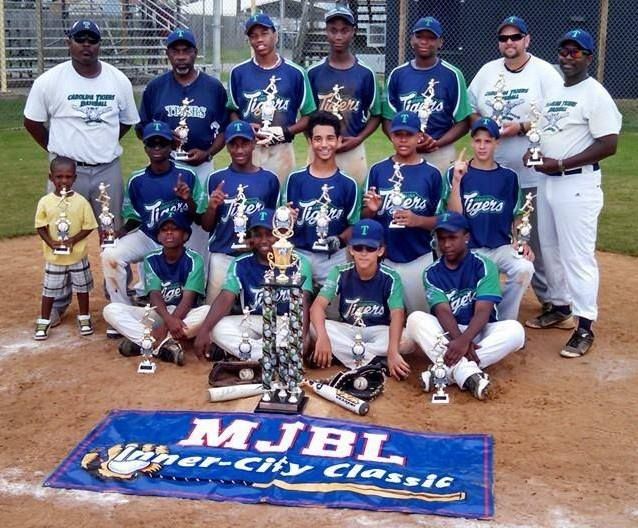 Salisbury’s Bill “Jet” Gillispie has contributed mightily to baseball in North Carolina since he and teammate Moe Hill integrated American Legion baseball in the state 50 years ago when they earned spots on the Gastonia team.
Gillispie was called names when he batted and dodged rocks in the outfield, but he also batted over .400 in 1964 and stole every base in sight in what had to be one of the classic mental-toughness perfomances.
Gillispie in his late 60s now, but is still going strong and still promoting baseball, especially youth baseball for the under-funded and underprivileged.
Gillispie launched an organization known as the Carolina Tigers in the Charlotte area, and the Tigers’ 14-under team, coached by Travis Gillispie, Bill’s son, recently won the Metropolitan Junior Baseball League World Series held in Richmond, Va.
The MJBL started in 1991 with the mission of bringing baseball back to the nation’s inner cities.
“We took two teams up there,” Gillispie said. “Our 12U team went 3-3, but our 14U team only lost one game We didn’t hit a lot, but we stole bases, played aggressive baseball and won the championship. We’ve got coaches who know what they’re doing.”
Gillispie said he would love to get some Rowan County kids involved with the Tigers.
He can be contacted at 704-637-5874.
Aliyah Farmer hammered 14 kills as North Rowan’s volleyball team won 25-17, 25-15 and 25-19 at Central Cabarrus on Monday.
Makala Lytton had six kills and six aces for the Cavaliers (2-1). Caroline Billingsley had four kills and was 13-for-13 serving, with two aces. Ashlyn Mills had a good day setting.
A lot of girls played really well on the road,” North Rowan coach Sandy Lytton said. “It was a large crowd, with a lot of their football players heckling our girls — in a good way.”
Other scores
Carson swept Davie, while Cox Mill swept Robinson.
East Rowan won 2-1 against Salisbury on Monday.
Abigail Lund had 11 digs for the Hornets. Katie Bullock had eight digs, while Mary McCullough had four aces.
Catawba Valley Community College won 25-18, 25-11 and 25-13 against the Montreat jayvees.
Aimee Cloninger (Carson) hd 14 kills, eight digs and four aces for the Redhawks.
Salisbury got a hat trick from Landon Goodman and got into the win column Monday with a 4-2 home win against A.L. Brown.
Salisbury (1-2) trailed 2-0 after 17 minutes — the Wonders scored on their only two shots on frame — but the Hornets came back.
Goodman scored on a penalty kick for the Hornets’ first goal of the season.
“Our first-half performance left a great deal to be desired, SHS coach Matt Parrish said. “We had an attitude adjustment and slight change in mentality.”
Salisbury leveled the match in the first minute of the second half when Goodman found a streaking Ahmedin Salcinovic, who finished a run of five different Hornets who helped build the play.
Goodman’s second and third goals came on assists from Salcinovic and Jamie Henriquez and finally put away the Wonders.
“ We are still struggling to figure out our identity and put the puzzle together piece by piece,” Parrish said. “The first half didn’t help at all and was clearly our worst half of the season, but I was proud of our resolve and guts in the second half. We started to communicate better and trust in one another to make the right play at the right time.”
Salisbury lost Christian Uribe to a foot injury, but Michael Brown and Joshua Lynch changed positions and were key to maintaining momentum.
Next up for Salisbury is Ledford (3-0) on Thursday night at Ludwig Stadium. Game time is 6 p.m.
Carson
Carson (2-0) plays its first home game tonight against Lake Norman (3-0).
Coach Justin Buckwalter’s wife, Cassie, had a baby on Monday.
The pre-Rowan County Meet will be held Tuesday at Dan Nicholas Park.
The boys meet starts at 4 p.m., with the girls meet to follow.

North Rowan won 7-2 against South Rowan in non-conference tennis played on Monday.
Veronica Leasure, Samantha Pritchard, Alexis Rice, Victoria Scheve and Indya Wiggins won singles matches for the Cavaliers. Olivia Sides won for the Raiders.
In doubles, the teams of Leasure-Pritchard and Scheve-Brandy Fox won for North Rowan. The team of Cierra Hunter-Olivia Sides won for South Rowan.
Salisbury-West Rowan
Salisbury rolled 9-0 at West Rowan on Monday in non-conference tennis.
Kayla Honeycutt, Grace Steinman, Maria Capito, Emily Capito, Julia Honeycutt and Bethanie Stauffer won in singles for the Hornets.
The winning doubles teams were Kayla Honeycutt-Maria Capito, Steinman-Kathryn Rusher and Emily Capito-Julia Honeycutt.
Eric Richardson made a double eagle 2 on Saturday on No. 18 at McCanless.
Playing from the blue tees, his long drive left him 178 yards from the hole. He holed a 5-iron on his second shot.
Ed Parrot and Terry Morgan witnessed the feat.
The Livingstone women’s basketball team participated in its first community service initiative under the leadership of head coach Anita Howard. The Blue Bears teamed up with Payton’s Promise to solicit donations for the non-profit organization at the local Wal-mart. All contributions were used to support the “Stuff the Bus” campaign to provide book bags and school supplies for children in Salisbury and neighboring towns. Upon their arrival the young ladies received a riveting presentation by board chair for Payton’s Promise, Mr. Sebastian Jones, who shared the history of the organization and how it came to represent the fight against child abuse.
“The team came in and breathed life into our efforts. They couldn’t have come at a better time”, Jones said.
Coach Howard is a huge advocate of giving back to the community in an effort to instill a sense of social responsibility in her student-athletes. “My goal will always be to develop successful, well-rounded, productive citizens that make positive contributions to their various communities”, she said.
Payton’s Promise (Child Abuse Prevention Center) was launched Oct. 3, 2012. The mission of Payton’s Promise is to promote prevention & awareness of bullying (including cyber).
The Kannapolis Intimidators will recognize the most decorated player to represent the Kannapolis franchise over the last 20 years on Friday, Aug. 29.
The first 1,000 fans will receive an action photo of 1997 Piedmont Boll Weevils shortstop Jimmy Rollins.
Rollins set the franchise record with 139 games played as an 18-year-old in his one season in Kannapolis and went on to win the National League MVP award in 2007.
Gates open at 6 p.m. on Friday, Aug. 29, with the game against the Greensboro Grasshoppers at 7:05 p.m.
Virginia’s Greyson Lambert, a redshirt sophomore quarterback, is preparing for the first start of his college career on Saturday against No. 7 UCLA.
“It’s what you train for, it’s what you go through two-a-days and camp and workouts all with your teammates just for this reason, to go out there and play against some of the best in the nation,” Lambert said.
The Cavaliers are trying to turn their program around after losing their final nine games last season and finishing 2-10.
. , don’t expect to get “blown out” like their QB did in that high school game.
The quarterback has worked hard to ensure a different outcome against UCLA.
He returned from Christmas break last January determined to unseat last year’s starter, David Watford. He helped to organize summer workouts, as well as social gatherings that brought the team together, figuring improved team chemistry could only help, especially in tough times.
In those last few months, Lambert has become increasingly assertive, defensive tackle David Dean said.
“I feel like his leadership has taken off a bit more. He seems more comfortable and the offense is really reacting to him in the huddle and just making plays and having his back,” Dean said.
A second season in offensive coordinator Steve Fairchild’s scheme has made a big difference, Lambert said, not only because he’s learned the schemes better, but the Cavaliers’ skill players have, too.
“I’ve seen a bigger difference in the team in how we’re flying around,” he said.
Fairchild said before this preseason began Aug. 1 that Lambert was “in no way, shape or form” ready to play last season, but now, it’s like a night and day difference.
“I understand the speed of the game, but also what defenses are actually trying to accomplish on every play, how they call their defense according to our offense and that sort of thing,” Lambert said.
The offense also looks different, All-ACC safety Anthony Harris said.
“It seems like they are changing. Last year they were a little predictable from a defensive standpoint,” Harris said, “and this year, they’ve thrown a lot of different looks at us.”
The Cavaliers, 21-point underdogs on their home field, are aware that not many outside their locker room have high expectations for them. Nonetheless, even with a brutal early schedule that also includes Louisville and BYU in September, Lambert knows the approach needed.
“The way we want to go at this is to prepare as hard as we can all week, go out on Saturday and put our best effort out there on the field, and whatever the outcome is, it’s over that Saturday,” Lambert said, making it apparent that the Cavaliers togetherness will not be fractured if they lose their opener.
“Whether it’s good or bad, win or lose, it’s over. It’s not going to make or break anything.”
———
Follow Hank on twitter at: http://twitter.com/hankkurzjr