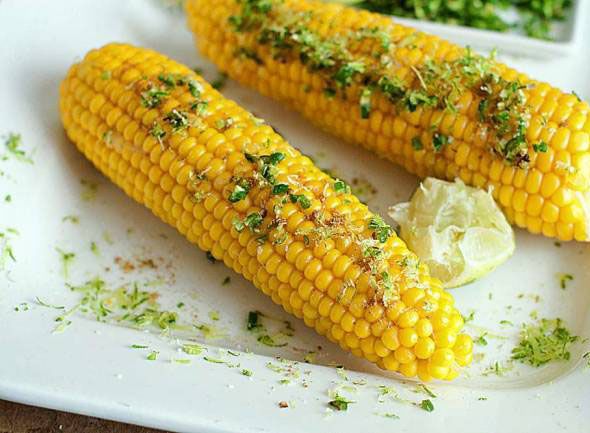 Corny ideas and another reason to sleep in

Bojangles’, long a football season food for fans in the Southeast, is introducing a sweet tailgating treat with its new, limited-time Football-Shaped Bo-Berry Biscuits.
The special edition biscuit will be served fresh, all day, every day at participating Bojangles’ in the Charlotte area now through Friday, Sept. 26. Like the original Bo-Berry Biscuits, these football-themed treats will have Bo-berries baked into them and will be topped with sweet dessert icing.
Fresh toppings for corn
There’s still fresh corn out there and here are a couple new ideas for serving: Blue Cheese Chive Butter — mash together 4 Tbsp. of softened butter with 4 Tbsp. crumbled blue cheese. Stir in 2 Tbsp. finely chopped chives and 1/2 tsp. ground black pepper.
Or try chili lime — spread cooked ears of corn on a platter. Sprinkle with fresh lime juice, finely grated lime zest, ground cumin, minced serrano chili (hot) and salt.
— NorthJersey.com
Gluten-free labels
“Gluten free” labels on packaged foods have real meaning now. Until early August, the term “gluten-free” was unregulated, and manufacturers made their own decisions about what it means.
This new requirement is especially important for people who suffer from celiac disease and don’t absorb nutrients well. They can get sick from the gluten found in wheat and other cereal grains.
Under a rule announced a year ago, food manufacturers had until the first week of this month to ensure that anything labeled gluten-free contains less than 20 parts per million of gluten — ensuring that those products are technically free of wheat, rye and barley. That amount is generally recognized by the medical community to be low enough so that most people who have celiac disease won’t get sick if they eat it.
— Associated Press
Like yogurt, but not
Organic yogurt giant Stonyfield has introduced a new product called Petite Crčme, inspired by the French fromage blanc and made from cheese cultures added to organic milk.
It contains 10 grams of protein and 15 grams of sugar, comparable to yogurt, but it does not have live microbes, or probiotics, which have been claimed to promote health. It also contains 15 percent of your daily recommended calcium intake, as do many yogurts.
The creamy result does not have the tang of yogurt, which some people dislike, but contains similar nutrients. It comes in 5.3 ounce single-serve cups in seven flavors, from plain to “Belle Blueberry” and “Mon Cherry Amour.”
More sleep, less junk
Craving donuts and bacon for breakfast? If salty, fatty foods are your dietary downfall, scientists have some advice: The secret to fighting these high-calorie temptations could come down to getting a good night’s sleep.
A new study found that when sleep-deprived, overweight adults got an average of 96 extra minutes of sleep per night, it cut their cravings for sweet and salty junk food by 62 percent and reduced their overall appetite by 14 percent.
— CBS News

A deep-fried, bacon-wrapped fair season is here
BUFFALO, N.Y. (AP) — It’s state fair season around the country, the time of year for over-the-top food.
The New York State Fair opened in Syracuse this week with an offering called a “Twinx.” It’s a Twinkie stuffed with a Twix candy bar, wrapped in bacon, deep fried and drizzled with chocolate-caramel sauce.
Creators of fair concoctions say they work all year to outdo themselves and the other vendors vying for the attention of an ever more expectant public.
Despite fat and calorie counts that would make anyone cringe, Lucy Long of the Center for Food and Culture in Bowling Green, Ohio, says fair food can be good for you — at least psychologically. She says that’s because occasionally indulging reinforces better habits and satisfies the craving for novelty.
— Associated Press

Your alarm clock gets the credit (or perhaps the disdain) for waking you up, but for many of us, it’s really that first cup of coffee that does the heavy eyelid lifting. A new product from British designer Josh Renouf, a recent graduate from Nottingham Trent University, aims to combine clock and coffee in one handy, attractively designed device that wakes you up to the soothing rumble of ball bearings working to boil water using induction heating and the rich smell of coffee — one cup, just for you, freshly brewed right on your bedside table.
The Barisieur — a name Renouf hopes will evoke both “your own personal barista” and coffee that will please the most-particular coffee connoisseur — won’t be available for purchase until early next year (with an estimated retail price of about $420), but it is already making a splash in the press.
— Food Network