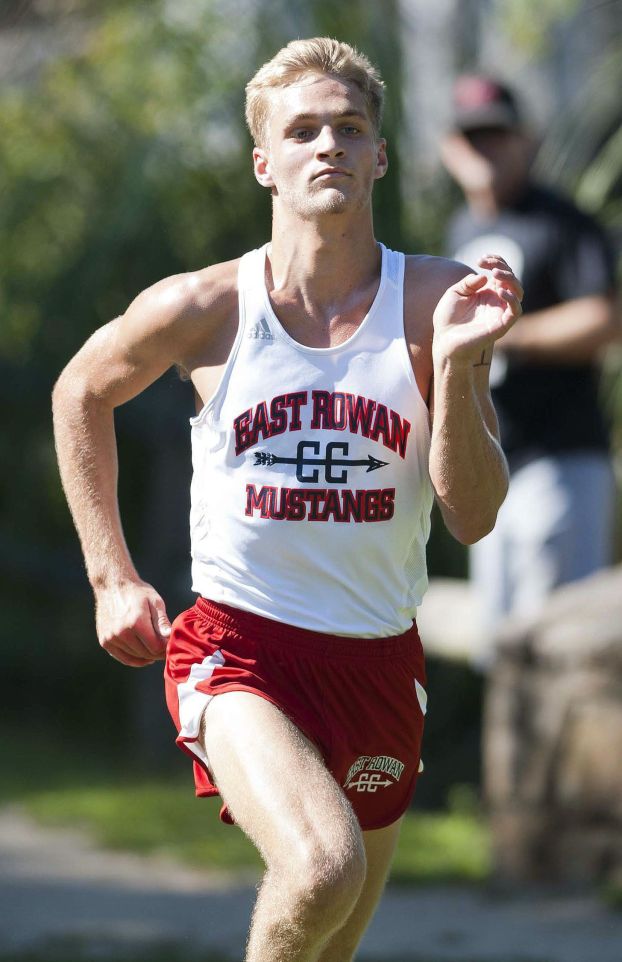 SALISBURY — “Look at you, Josie, look at you!” screamed West Rowan’s boisterous new girls cross country coach Ester Marsh, as Josie Heglar crossed the landmark bridge at Dan Nicholas Park and bolted for home with no competition in sight.
Heglar resisted the temptation to look at herself and kept right on running. The junior, who finished third in the official 2013 county competition, breezed to victory in Tuesday’s Pre-Rowan County Meet with a time of 22 minutes, 4 seconds.
East Rowan’s Faith Blume was second, 48 seconds behind Heglar. Blume’s teammate Faith Faller placed third.
“Our new coach is pushing us,” Heglar said. “I ran the race she wanted. I paced myself and ran that first mile at a 7-minute pace. After that, I found out I still had the energy to speed up. At the start of the second mile, I started to pull away.”
Heglar said she looked forward to contacting Rebecca Parker with the news. Parker is a West Rowan graduate who won the last three county meets. Heglar looks like a good bet to maintain the Falcons’ streak when the teams return to Dan Nicholas for the official county meet on Sept. 24.
“We had a lot of girls run strategic races,” Marsh said. “They weren’t worried about points, they were just competing against the clock. As they improve individually, that’s going to make us better as a team.”
The surprise team was the Carson girls. With almost all new faces, the Cougars won the team competition with 32 points. The first five Cougars to the finish line included four freshmen and a sophomore.
Freshman Olivia Gabriel shaved two minutes off the time she ran Saturday in Charlotte and placed fourth to lead the Cougars.
“They’re all young’uns, and that’s exciting,” Carson coach Les-Lee Efird said. “They don’t know enough yet to overthink anything. They just ran.”
East (42), West (58) and Salisbury (112) followed the Cougars. Freshman Mary Kaufmann placed 14th to lead Salisbury. South Rowan and North Rowan didn’t have enough runners to post team scores, but South Rowan’s Micah Helms placed 15th.
West Rowan won the pre-county meet last season, but East Rowan won the county meet.
••••
In the boys race, Carson was in control.
Carson’s impressive 2-3-4-5-8 showing led to a score of 22. East Rowan (39), West Rowan (71), Salisbury (123), North Rowan (162) and South Rowan (164) followed.
East Rowan is a local dynasty in boys cross country and has taken the county meet six straight seasons. Carson, runner-up to the Mustangs the last three years, appears ready for a breakthrough.
“Carson is strong and they are better than us right now,” East Rowan coach Rick Roseman said, “But we’re not conceding anything.”
Robert Marchinko coaches the Cougars. His son Zachary is one of the best in the region, but Grant Doby, Garrett Ingold, Dustin Cox and Hunter Kimball also ran fine times.
“East has been a great program a long time and Rick has done a super job a long time,” coach Marchinko said. “Our guys got over a mental hurdle today by winning the meet and I’m proud of where we are at this point. Still, this was the pre(-meet), not the county. It’s important to remember that.”
The individual race was everything it was expected to be.
Defending Rowan County champion Conor Honeycutt and Zachary Marchinko were shoulder-to-shoulder as they pounded through an open field to begin the race, and they stayed that way until the last 120 meters. Honeycutt crossed the line for victory in 16:44. Marchinko was not far behind with a 16:48.
“Saturday, I felt great, but I was sluggish today and just didn’t have it,” Marchinko said. “There are no hills on this course, it’s narrow, and I just never felt like I could surge. I was still right there with Conor three-quarters of the way across the bridge, but I couldn’t out-kick him. I can’t be mad, though, because the team did do well.”
The long-striding Honeycutt has speed as well as endurance, and won’t be outkicked often.
“Conor is a very good runner, he’s the defending county champ, and he’s really good here,” coach Marchinko said. “He and Zachary are top 10 in the state in 3A. They’ll go back-and-forth all year.”
Roseman offered praise for Honeycutt.
“Conor’s work ethic and leadership set the tempo for everyone on our team,” Roseman said. “He demands the best of himself and his teammates.”
That was true. Honeycutt was more concerned with the big picture than about winning the latest installment of his individual duel with Marchinko,
“Carson’s team is very good,” Honeycutt said. “We can’t let up. We saw how much work we’ve got to do.”
Running the best times for their respective teams were West Rowan’s Jordan Bostian (seventh), Salisbury’s Alex Yang (23rd), South Rowan’s Kurtis Reed (24th) and North Rowan’s Coby Weant (39th).
See Scoreboard for top-20 finishers and times.