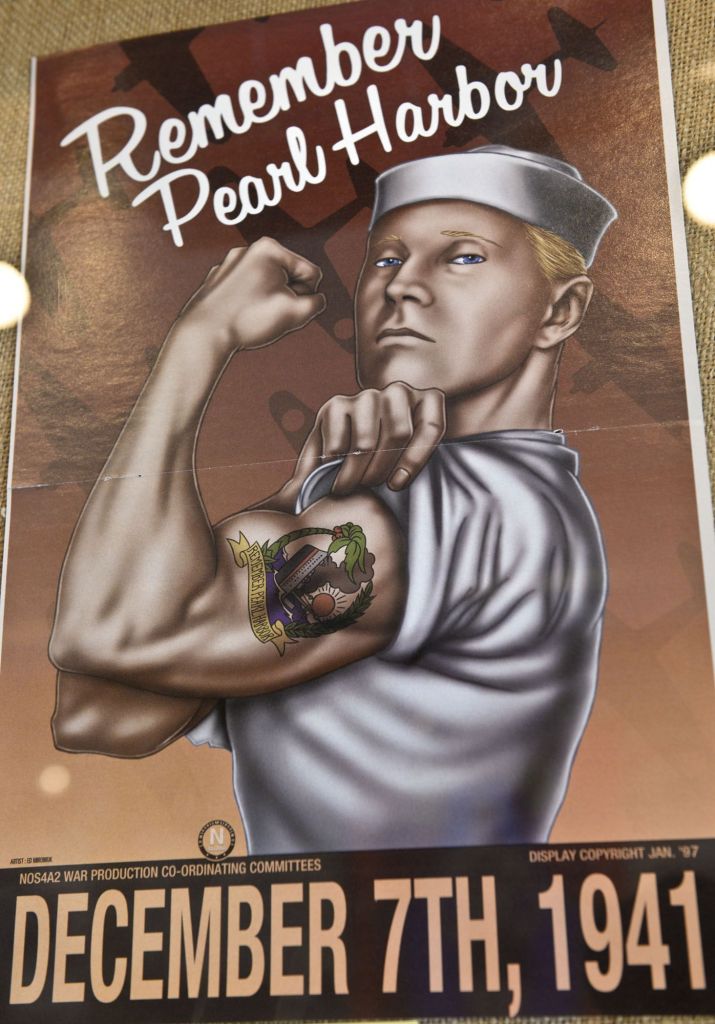 WINSTON-SALEM (AP) — Once, tattoos were the exclusive territory of “loose women, sailors and prisoners,” Harriett Cohen said.
But that started to change in the 1980s when rock stars and rock-star athletes started sporting skin art. Now, soccer moms and rock fans are equally likely to display skin that is adorned with permanent images — from mothers to monsters, from deities to demons.
Cohen and her partner in life and love of ink, C.W. “Chuck” Eldridge, own and operate The Tattoo Archive and The Book Mistress on Fourth Street. The storefront houses two businesses and a nonprofit organization.
The Book Mistress portion is a book store where you can browse through big, gorgeous, coffee-table books full of tattoo designs and smaller, soft-cover books that show specific tattoo and artifact collections. Many are out of print or hard to find. Cohen sells them in the store and online at www.bookmistress.net.
The Tattoo Archive is a tattoo museum; it’s a collection of tattoo memorabilia, gadgets, machinery and “flash,” which is what drawings and paintings of tattoo designs are called. There is the tattoo shop in the back, where Eldridge does custom tattooing.
The nonprofit, The Paul Rogers Tattoo Research Center, was formed in 1992 when Eldridge, who already had a large tattoo collection, inherited a “huge collection” from Paul Rogers, a legend in the tattoo world.
Ed Hardy, a tattoo artist who achieved international fame when he developed a popular line of apparel and accessories, is one of four directors of the board of the nonprofit, the Paul Rogers Tattoo Research Center. Eldridge is another. Their stated mission is to “safeguard his (Rogers’) collection and his legacy in the tattoo world.” A book about Rogers by Don Lucas calls him “The Father of the American Tattooing.”
Born in 1905 in Western North Carolina to a family of textile workers, Rogers went to work in cotton mills when he was 13. He didn’t make it past third grade, but started drawing around the age of 20 and became interested in gymnastics and acrobatics.
His curiosity about tattoos was piqued by an uncle and a traveling salesman. They had both gotten tattoos when they were in the military.
Rogers had a long memory and kept good records. He told Lucas that he bought a tattoo kit that ran off dry-cell batteries and started tattooing on Oct. 11, 1928. At first, he tattooed only himself because, “There was nobody getting tattooed around there then.”
But then he tattooed anyone who would let him — until he got good enough to be hired by a traveling carnival. There, he met his wife, Helen, the boss’ daughter, who was a Hawaiian dancer and snake dancer.
Rogers traveled throughout the ’30s and ’40s up and down the East Coast to Portsmouth and Norfolk, Va., Charleston, S.C., to name just a few destinations, building his reputation as a tattooist.
In the 1950 and ’60s, he spent time in Spartanburg, S.C., Jacksonville, N.C., and Anchorage, Alaska, finally settling in Jacksonville Beach, Fla., in the 1970s. There, he tattooed less and worked more on tattoo machines, eventually building them.
“His tattoo machines were sold around the world,” Eldridge said, “and are still selling as collectors’ items.”
And Rogers collected items.
“What’s unique about Paul’s collection is that it was intact at the time of his death in 1990,” Eldridge said.
Eldridge, also a native North Carolinian from Elgin, joined the U.S. Navy when he was 18 to “see the world.” He got out of the service in 1969 and knocked around the San Francisco Bay area, washing dishes in a soul-food café and building custom bicycles until he discovered tattooing the 1970s and made that his life’s work.
Eldridge got some tattoos and learned the trade from an artist in San Francisco and opened the first Tattoo Archive in Berkeley in 1982. “Even then, the history was the main focus,” Eldridge said. “Tattoos paid the bills.” As they do now, along with the book sales. Eldridge said that he does about two tattoos a day.
He met Rogers in the ’70s through mutual acquaintances, and they communicated throughout the years, running into one another at occasional tattoo conventions.
“He knew the effort I was putting in the history of tattooing,” Eldridge said. Rogers’ family didn’t share his passion for the art of tattooing. He wanted his collection to go to someone who would care for it.
“I was getting sick of the Bay area after 36 years,” Eldridge said, and he felt that Rogers’ collection belonged in Western North Carolina where it had its genesis. That was the impetus for creating the nonprofit in 1993, and Eldridge started raising money to move and house the collection here.
Cohen and Eldridge met when she went into his shop in Berkeley in 2000 to get a tattoo to commemorate her dog who had recently died. She ended up getting a dogwood blossom, somewhat coincidentally that’s the North Carolina state flower. They were married in 2005, and moved to Winston-Salem and opened shop in 2007.
About 250 pieces of art and artifacts are hanging on the walls of the Tattoo Archives, including an exhibit on “Patriotic Tattooing.” area that spotlights patriotic tattoos. It will be on display until Oct. 31.
What is on display is a very small percentage of the Tattoo Archive’s collection, Eldridge said.
“At one time, tattoo artists’ walls would be filled with designs for the customers to choose from,” Eldridge said. “With technology — Google and Pinterest are creating an image bank — everybody wants a custom.”