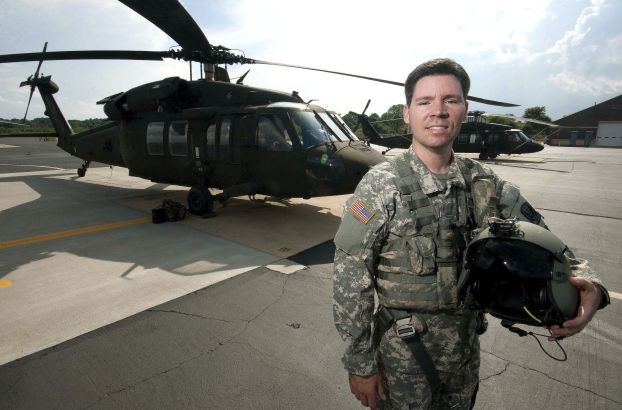 A bleary eyed and bone-tired Matthew Hanks has crawled into bed more than once over the past six years just hoping for a few hours sleep before work rolls him out of bed the next morning.

He wouldn’t have it any other way.

The Gaston County native is a full-time real estate agent and broker-in-charge at Coldwell Banker Meca Realty in Belmont, but he’s also a commissioned officer and pilot in the North Carolina Army National Guard. He pilots UH-60 Blackhawk helicopters as a first lieutenant assigned to C Company, 1-131st Aviation Battalion based in Salisbury.

For Hanks, it’s a way to follow in his grandfathers’ footsteps — both served in the military — and a chance to fulfill a lifelong dream.

Six years ago, however, he was a newly married real estate broker looking for a way to provide for his family after the real estate market collapsed. He answered a National Guard ad online.

“I was just searching for any way I could to help my family through that time,” Hanks said.

Hank’s wife, Susan, was less than ecstatic when he told her he was considering joining the National Guard.

“It wasn’t exactly what I had in mind when we talked about bringing in some extra income,” Susan said. “But we thought and prayed about it that it might offer him a path into aviation.”

Hanks joined the Guard and served in an enlisted support role for a year before he got the chance to go to Officer Candidate School. The yearlong course is a proving ground that Hanks called a physical and mental challenge.

Spread over one weekend each month and two weeks each year, the program is designed to test officer candidates physically and mentally to make sure they won’t fold under pressure upon assuming a leadership position in the Army. Student withdrawal requests are common, and Hanks described the experience as the roughest part of his road to becoming a pilot.

“I’d work a civilian job for most of the month but would go down to Fort Bragg on certain weekends,” Hanks said. “You know it’s going to be hard, and for the entire weekend you’ve got people in your face and you’re walking right on the edge of your limit. Then you walk right back into civilian life the next morning. That was a challenge.”

He tried to remember that Susan didn’t set out to marry a soldier.

“She didn’t sign up for this, and you always have to keep that in mind,” Hanks said. “It’s hard to walk that line on the weekends, and then you have to change gears and go back to your family and job during the week.”

Of the 40 students who started the course with Hanks, eight graduated.

After training school, newly minted officers get a chance to fill out a kind of “dream sheet” that lists their top choices for follow-up training and assignment. In the N.C. Army National Guard, that could be anything from aviation or armor officer to military intelligence, infantry or transportation officer.

“You choose your top three branches and hope your needs match those of the Army,” Hanks said. “Aviation was my top choice, and luckily I was selected.”

He received orders to report to Fort Rucker, Ala., for 20 months of flight training, which Hanks said thrilled him but posed a tough choice. He had only been married a couple of years. He and Susan had a new baby.

“We had to decide if being apart was going to work or if we should all go down,” Hanks said.

With a new baby, Susan was reluctant to leave the family support network she had in North Carolina. But she ultimately decided the family needed to be together.

“It turned out to be one of the best decisions we ever made,” Susan said. “We had a great church family we met at Fort Rucker, and we both made great friends, many who were in the same situation we were in. You just don’t have friends that close until you’re away from family.”

Fort Rucker was everything Hanks expected it to be — and a little more.

He learned to hover a helicopter for the first time and attended survival courses that could save his life if he had to ditch his aircraft over water or enemy territory.

“At times I couldn’t believe I was being paid to do this,” Hanks said. “Other times it was complete overload, like trying to drink from a fire hose.”

Hanks learned to pilot the UH-60 Blackhawk, a utility helicopter that can fly everything from aerial resupply to troop transport or search-and-rescue missions. After graduating, he went back to his Guard unit in Salisbury for mission-specific training. And he returned, largely, to civilian life.

The family returned to North Carolina, and Hanks resumed a more traditional National Guard training schedule, flying and drilling certain days each month while returning to his real estate career.

Hanks said the support of his family, employer and unit is the key to juggling all his responsibilities.

“My employers have been great,” Hanks said. “When I needed to go train, they said, ‘Go.’”

Susan said their families have rallied around the couple, especially when Hanks was away training.

“We’ve had a lot of help,” Hanks said. “Both of our families are real close, and I’ve never felt totally overwhelmed.”

Her most difficult moment of the past six years? Hanks having to leave for three weeks of training the day after their third child was born.

“I’ll never complain,” Susan said. “He loves the flying and the leadership aspect of his job, and I’m proud of what he’s done.”

ROCKWELL – When customers walk into Greg’s Family Restaurant on a Sunday afternoon, a lot of times it’s like they’re... read more