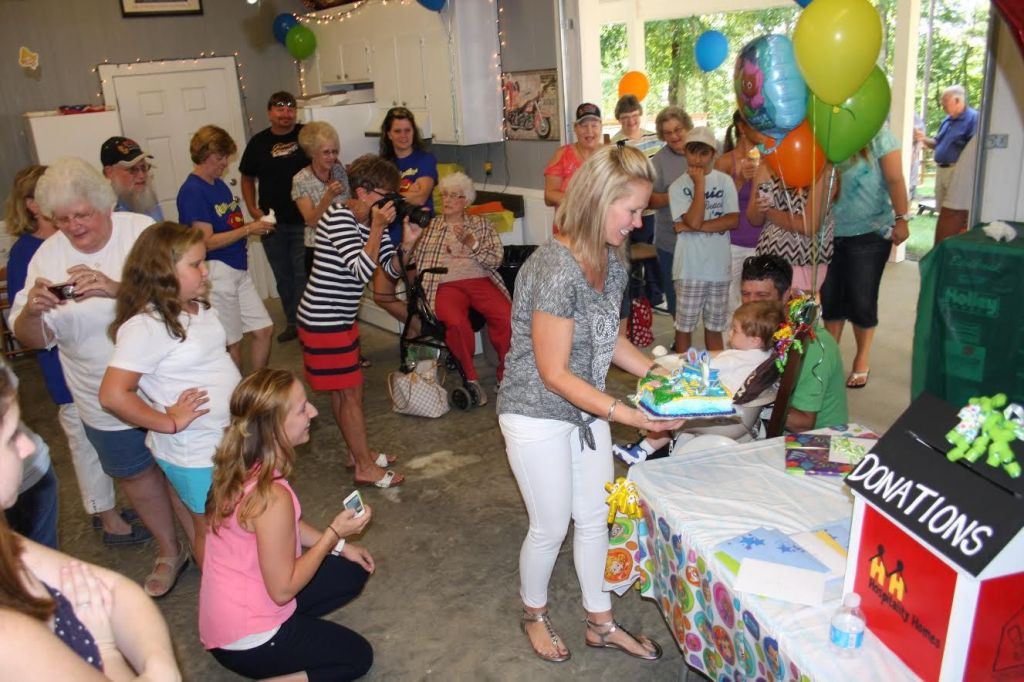 MOCKSVILLE — On Aug. 16, Landen Spry’s second birthday, more than 100 friends and family members gather at the 25-acre farm his parents lovingly call the Ponderosa. There’s cake — lots of cake — and an ice cream truck, and balloons — lots of balloons. Cows, donkeys and dogs roam across the rolling pastures, and guests, especially the young ones, venture to the fence and look at them up-close.

Of course, Landen is more than a little overwhelmed with all of the company. He’s gotten a little cold over the past couple of days, and he’s feeling just a bit puny. But Landen’s a trouper. He snuggles with his beloved Paw, Mike Spry. Eventually, his nurse, Tiffany Alexander, coaxes a smile from the typically quiet child.

The sniffles might have made him a tad droopy, but it’ll take more than that to bring down Superboy, the nickname his parents Stacy and Jolene bestowed on him.

After all, today is his birthday, and the child who’s had more than 30 surgeries and procedures during his brief time on earth is gonna celebrate.

The week before the party, there’s a flurry of activity at the Ponderosa. The grass has been cut. A crew is power washing the deck and carport. A little bit of water leaks into the dining area from the French doors. Stacy nonchalantly wipes it up with paper towels.

Meanwhile, Landen is babbling and scootching across the floor. The next few minutes find him walking tentatively between Stacy and Jolene, who are sitting about three feet apart in the den. He doesn’t quite yet have the confidence to step out on his own.

Jolene has just come in from her job as a nurse with Carolinas Women’s Health in Salisbury. Stacy works from home in aircraft engine sales and travels frequently. A program for medically fragile children pays for Tiffany to stay with Landen for 45 hours a week while the couple works, although Stacy says the boy soon won’t need a nurse.

“You’re in a good mood,” Jolene tells her son, as they start playing with toys cars and trucks.

He’s been having a lot of good days lately, his dad notes. He and Jolene delight in simply watching Landen play.

In April, he had what his parents hope was the final surgery.

When Jolene was pregnant, her colleague and obstetrician, Dr. Jessica Blumenthal, felt something wasn’t exactly right.

Just after Landen was born, he was diagnosed with a condition called VACTERL. The letters each stand for a specific health challenge, all of which at first may seem unrelated. Landen’s abnormalities included: a tethered spinal cord, the absence of an anus, two holes in his heart, and an incorrect connection between his trachea and esophagus.

VACTERL patients can also have problems with their kidneys or limbs, which Landen does not.

You’d never know by looking at him that he has the condition, his dad says. The family is loving the wide-open spaces of the Ponderosa after spending 10 months in the intensive care unit of Boston Children’s Hospital.

Landen spent so much time in the Boston hospital that he became known as the Mayor of Seven South.

“He was the only patient well enough to go outside,” Jolene says.

Landen spent many an afternoon in his stroller, getting fresh air the whole family longed for.

Landen endured a lengthy heart surgery — a straightforward fix, if you will — along with spinal surgery that was also less complicated than some of the other procedures. The abnormality that caused the most problems was his malformed esophagus. In an 18-hour surgery, Landen became the youngest patient to have a jejunal interposition: doctors fashioned him an esophagus from parts of his small intestine. In April, doctors created an anus for Landen and in June, they took down his colostomy bag.

But although Landen now has an anus, he does not have an involuntary sphincter muscle, and therefore will need to learn to consciously control his bowel movements. The family will see yet another specialist, this time in Columbus, Ohio.

As he grows, Jolene says, “He’ll just figure out what he’ll have to do.”

In the grand scheme of things, however, Stacy and Jolene don’t think bowel management is such a big deal.

Because Landen was tube-fed for so long, he developed an oral aversion. But at the beginning of the year, his parents and grandparents started introducing food ever so slowly — ice cream, purees, applesauce, yogurt and more.

“He loves York peppermint patties and Andes mints,” his mom says. Also on his menu are orange push-ups, cheese doodles and sushi. “He has tried and will try just about anything.”

Landen just has to be careful and chew, chew, chew, so as not to aspirate food into his lungs.

He’s already taking physical and occupational therapy, and will soon start speech therapy. Although he takes in exactly what everyone is saying, he rarely speaks.

He uses a bit of sign language to communicate, and he always has a way of letting his family know exactly what he wants — and what he doesn’t want.

At the moment, he wants more applesauce.

Now you understand why Landen’s second birthday party is kind of a big deal.

“We invited everybody on his facebook page,” Jolene says. “We’re looking for between 100 and 150 people.”

Her mom, aunt, sister and two brothers are all coming from Florida. Dr. Blumenthal is coming. Dr. Thomas Pranikoff, Landen’s surgeon at Baptist, is also coming.

The Sprys have requested no gifts for Landen — he has plenty of toys, to be sure. They would welcome donations to the Ronald McDonald House and Host Homes.

“Both organizations did so much for the family,” Ann says.

The party raised in excess of $400 for each charity.

Landen’s birthday is a picture-perfect day — sunny and hot. The ice cream truck is a popular stop.

Despite the crowd, Landen does not cry. He sticks close to Daddy or Paw. He loves, loves, loves the vanilla soft-serve cone his dad gets for him — so much so, that he pushes away his small cake presented by his mom a short time later.

Jolene doesn’t mind. She helps him blow out the two candles.

Landen’s whole family is thankful that this day has arrived. Through their tears, Stacy and Jolene express their heartfelt thanks to the crowd.

“You prayed for us, you listened to us cry …” Stacy says, trailing off.

“You fed the chickens,” Mike adds. “You don’t know what your prayers meant.”

In his own prayer, Mike gives thanks for all the blessings of the past two years.

With her twin sons, Alex and Ben, Jessica mingles with the rest of the gathering.

“He’s doing remarkably well,” she says. “It’s truly amazing. He’s certainly delayed developmentally, but a lot of that is because of all the surgeries he’s had. He’s catching up quickly.”

Landen’s parents estimate that he’s about a year behind, but, as Jessica says, he’s gaining steps daily.

“We had dinner together the other night,” Jessica says. “He had food all over the floor and it was wonderful!”

Just as the crowd starts outside for a balloon lift-off, Stacy stops everyone. A special guest is on Skype: Landen’s surgeon in Boston, Dr. Russell Jennings.

The surgeon is clearly thrilled to see how Landen’s grown.

“They stuck together in a very stressful time,” he says of Landen’s family. “This is so awesome.”

Stacy and Jolene want Landen’s doctor to see him eat ice cream, but after one cone, Landen pushes another away.

As the festivities begin to wind down, Mike uses a golf cart to ferry guests back down the long driveway to their vehicles.

He cuts off the cart and sits for a while, reflecting on all the needles and pain and surgeries and procedures Landen has endured. His doctors say Landen won’t remember any of it. But Mike will.

He talks about the time when Landen was so dehydrated, medical personnel couldn’t find a vein to start saline. Landen was screaming and his parents were hysterical, but Mike was determined to stay by his side.

So even though you can’t see them, Mike has scars, too.

But he will bear them, and he will continue to watch over Landen. That’s what granddaddies do.