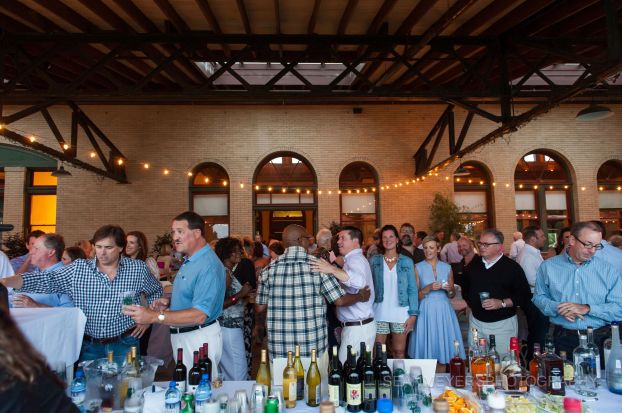 RiverDance, the annual fundraiser for the LandTrust for Central North Carolina

iverDance, the annual fundraiser for the LandTrust for Central North Carolina, was held at the Historic Salisbury Train Station on Aug. 9. The 325 guests in attendance enjoyed an evening focused on local farms, local foods and local spirits. A delicious, locally-sourced meal was catered by Morgan Ridge Vineyards. Specialty cooks Butch Hudson and Seth Morris prepared beef brisket and wood-smoked barbecue. Poppin’ John’s Ice Cream from Albemarle served-up cool, summertime deserts. Beverages for the evening featured locally produced Yadkin Valley wines and craft brews.
The musical backdrop for RiverDance was provided by a variety of performers including singer- songwriter R.J. Adams, the traditional and folk sounds of siblings Gabe and Grace Bemus and red-clay roots and American artists The Flatland Tourists.
The LandTrust for Central North Carolina is non-profit land conservation operating in a 10-county region along the lower Yadkin-Upper Pee Dee River Basin. As it approaches its 20th anniversary in April, 2015, the LandTrust has worked to conserve over 24,000 acres of unique natural areas, land along rivers and streams, family farms and significant cultural and historical sites. More information about the LandTrust for Central North Carolina can be found at www.landtrustcnc.org

Ever heard of thrifting? Me neither, until my friend Susan Stubbs told me about it. We’ve known each other forever.... read more