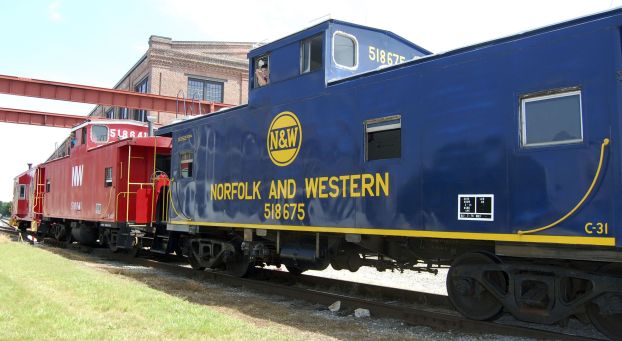 Train enthusiasts braved the heat to enjoy the Historic Spencer Shops Train Show at the North Carolina Transportation Museum Saturday, and organizers are expecting even more attendees today.
The show features railroad vendors, model train layouts, tours, warship models, a lineup of guest speakers and motor car, passenger train and caboose train rides.
Nearly 40 vendors showed up for the event with 130 tables of merchandise. Everything from model train and layout pieces to memorabilia, T-shirts, hats and books is up for sale.
There’s a “wide gamut” of merchandise, according to Leah Cook, a staff member at the museum who helped organize the train show.
Vendors carried model train and layout pieces in all sizes — Z, N, HO, O and G scale.
“The model boats are one of the most popular new things we’re doing this year,” said Kevin Cherry, interim director of the North Carolina Transportation Museum.
“It’s a transportation museum, so it’s not all about the trains,” he said.
Charles Lamm, who was showing the BaD ship models, explained that each ship model floats and is radio controlled.
“We have quite a few models on display,” he said.
Laam showed BaD ships at last year’s show as well, but this year exhibitors had the opportunity to float some as well.
This year, a temporary boat pond was built to show off the models.
“It’s neat to see them floating and moving around,” Cherry said.
Five-year-old Cole Woodard’s favorite part was looking at the different model trains and the layouts they ran on.
“He’s just getting into the model trains,” his mother, Amy Woodard, said. “He’s starting to build his own set, so he’s getting ideas.”
“I think to get in the hobby of trains, this is perfect,” she said.
The caboose train was a hit with Grayson Caligan of Concord, who is also 5 years old.
“He is fascinated with trains,” said his mother, Jennifer Caligan.
“We thought there would be plenty of things for him to see,” she added.
Trains are in vendor D.I. Gore’s blood. His father was the visiting superintendent over the Salisbury and Spencer train yards back in the day.
“We enjoy meeting people — selling trains,” he said, adding that he enjoys sharing his train knowledge with those he meets.
Although the Transportation Museum has held a number of shows in the past, this is the second time they’ve done this particular show, Cook said.
“This is one of the many events we do to raise support for the museum,” said Kelly Alexander, chief operating officer of the North Carolina Transportation Museum Foundation.
This particular event has “really taken off,” Cherry added.
“It brings more recognition to the museum,” Cook said, adding that their goal is for the North Carolina Transportation Museum to be the “premier” transportation museum in the Southeast.
Although they’re still in the throes of this year’s show, Cook said she already has “big dreams for next year.”
Admission is $11 for adults, which includes the train show and museum admission. Chidren between the ages of 3 and 12 are admitted to the show for free, with a $4 museum admission. Train and turntable rides require an additional fee.
The event continues today from 10 a.m. until 5 p.m. at the North Carolina Transportation Museum, 411 S. Salisbury Ave. in Spencer.

Teaching is about caring, making a difference

I first met Teri Mills during a mother-daughter banquet at Dayspring Community Church in China Grove. The program director for... read more