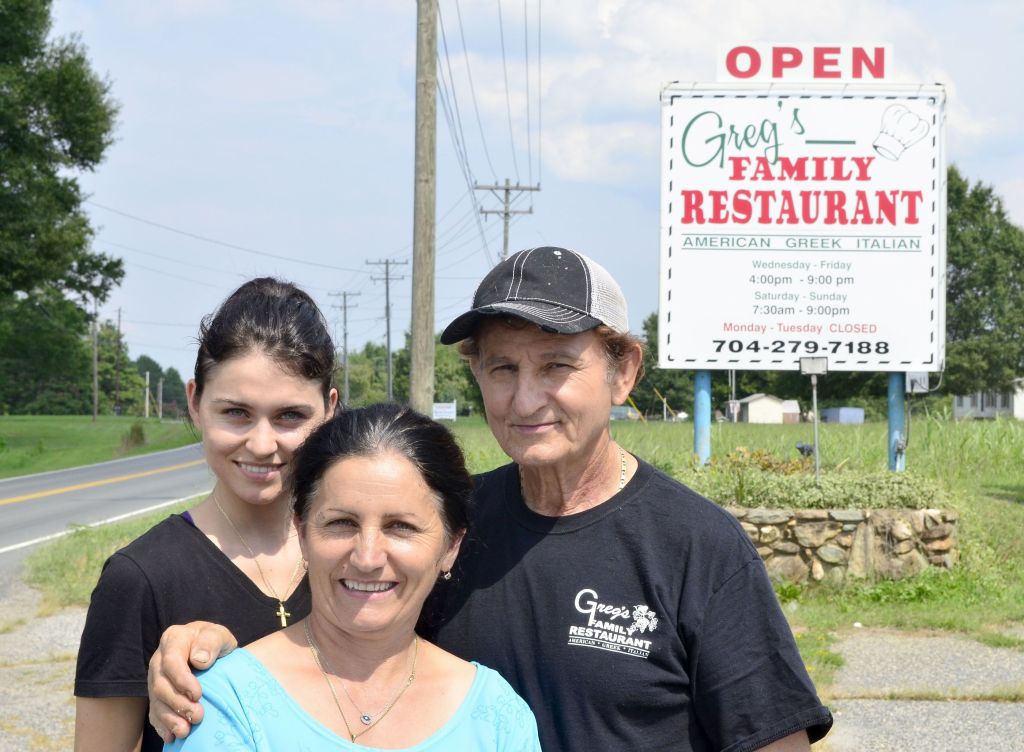 ROCKWELL – When customers walk into Greg’s Family Restaurant on a Sunday afternoon, a lot of times it’s like they’re coming home.

Greg and Agne Kakavitsas, the owners, recognize a lot of their patrons. Spend an hour in a booth there, and you’ll see plenty of excited hellos and more than a few hugs.

Greg, usually, is back in the kitchen keeping things running.

Today, after 53 years, Greg calls himself “a master chef” – and no matter what that title means elsewhere, here it means that Greg can cook almost anything.

Five years ago, they purchased Anchor House, a family-owned seafood restaurant that opened in 1984.

It was a location, and a name, with 25 years of history behind it – a name that people were familiar with, Agne said.

But the former fish camp’s name and image also hid the fact that there was much more on the menu, she said.

“People would drive by,” Greg said. “… They come in and say they didn’t know we’re not just serving seafood.”

This summer, the Kakavitsas family decided to take a leap of faith.

They remodeled the restaurant, reorganized the menu and renamed their family business to reflect their history.

And, although the full seafood menu is still there, Greg’s Family Restaurant now has a look and feel all its own.

“We try to do the best we can for our customers,” Greg Kakavitsas said.

When they come in the door, Agne said, “we want them to feel like they’re in their home.”

Although Italian and Greek dishes, steaks and other entrees have been on the menu since the Kakavitsas family bought Anchor House, the new menu – and a new sign at the road – call attention to the variety inside.

Greg said his signature dishes are marinated meats, made fresh in the restaurant according to his own recipe.

Other restaurants may only marinate meat for a few hours before it’s cooked, he said.

At Greg’s Family Restaurant, the chicken, pork and beef are marinated in the refrigerator for two days before they’re grilled to order, Greg said.

The different marinades compliment the meat and give each dish more flavor, said daughter Erisa, who’s worked at the restaurant in recent years.

She and her sister Eleni have waited tables and helped out as needed, and they’re quick to point out their favorite dishes.

Erisa points out that Greg’s Signature Spaghetti – pasta tossed with fresh vegetables and Feta cheese – really ought to be named after her, since it’s her favorite dish.

“I’m the creator, you’re the good eater,” Greg said, with a grin.

Greek food, part of the family’s heritage, is also prominent on the menu, including gyro sandwiches and dinner plates.

Greg’s Family Restaurant also serves breakfast, including a standard selection of meats and eggs as well as pancakes.

Agne said that, originally, she wanted to keep the Anchor House name since people would be familiar with it.

Now, she said, she’s glad for the change.

Agne, who also works in real estate, said she chose the new colors and décor for the restaurant.

“This place is not just French fries and coleslaw anymore,” Agne said.

If anybody had reason not to like the new name and look, you might guess it would be her.

“As a matter of fact, I told Greg, ‘I don’t do change well!’” Brown said, standing near some empty seats as other waitresses cleared and reset tables.

The new look won her over right pretty quickly, Brown said. “I just feel like the atmosphere has changed. There’s ambiance here.”

The big changes have been a lot for the Kakavitsas family, too.

The renovations shut the restaurant down for days this summer, and Greg said they’re now working to put the word out about the new name and menu to reach new customers in surrounding towns.

And it’s working. Greg and Agne say more people are starting to come in.

“The economy is not helping the business much, but it’s okay,” Greg said. “We’re doing a good job, and things are going to get better.”

Over the years, Greg said, he’s worked in several restaurants, including Townhouse in Charlotte and a previous Greg’s Family Restaurant as well.

The Kakavitsas relocated to Rowan County five years ago to give the girls better schools and a safer place to live, Agne said. Another son, Christopher, is living on his own.

Even as the family hopes for business to keep growing, Erisa is leaving home for college, making this even more emotional time.

And the word is starting to get out.

Kathi Lingle and Catherine Ketner came in for Sunday lunch recently. “You can tell a difference,” Lingle said.

Not only does the food taste fresher, but the presentation is nice, she said.

Speaking for herself, Brown said, “I love it, it looks so nice. It’s more than seafood now.”