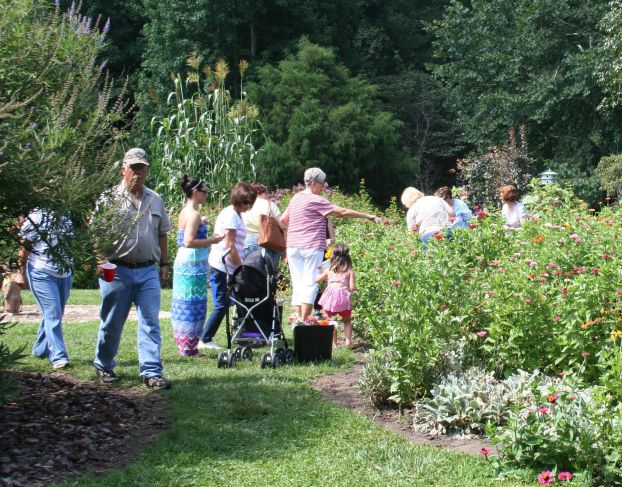 Chartered in 1974, the Humane Society of Rowan County will mark 40 years with a special event at the Rowan County Fairgrounds on Saturday, Sept. 13.
Jane Hartness, president of the Humane Society, says Care for Your Pets/Care for Yourself will be for people who have pets or love animals. It will feature a variety of vendors with things to pamper pets and people.
“It’s a celebration,” Hartness says. “We hope to raise a little money.”
Among the items to be offered will be homemade dog snacks, pet sitting services, 5-minute chair massages, and more. Rowan Animal Clinic will offer microchipping for your pet at the event.
“We have plenty of space,” Hartness says. It costs $25 for a business to set up at the event. Nonprofit groups can set up for free.
Among the activities will be a horse show and tips for caring for horses.
This year, Spencer gardener Jean McCoy did her annual flower cutting to benefit the Humane Society. “We are still in the clouds over this. We were extremely blessed to be on the receiving end. It’s one of the largest ones she’s had so far.”
McCoy says the cutting raised more than $3,400, from the cost to participate to outright donations. “We had more than 250 people,” she says.
“We’ll be talking about that for years to come,” Hartness says.
Hartness looks back at what the Humane Society has accomplished. “As soon as we started taking animals, we were determined that any of our placed animals would have to be spayed or neutered. … One of our proudest achievements is being able to get the reduced cost spay/neuter option, which started in 2003. We bought a box truck to take animals to Greensboro for spaying or neutering. “We’d pick them up the next day.”
Now, three local veterinarian practices work with the group on low cost spaying and neutering, “But it has to be done through the Humane Society,” she said.
Between 850 and 1,000 cats and dogs are neutered in a year. “One cat or dog can be responsible, over seven years, for hundreds of thousands of offspring. We are preventing many, many unwanted births for kittens or puppies. When there is no one to care for them, it’s better to have the dog or cat neutered.”
Hartness points to another success, when in the 1980s, county commissioners banned the sale of stray animals to labs that do testing on animals.
“Our proudest accomplishment is when we’ve helped an animal live and seen it go into a wonderful home.”
The Humane Society focuses its efforts on taking in sick or injured stray or abandoned animals. “We help people who find a stray. … We depend on foster homes and they only have so much room.” Hartness says it’s expensive to board an animal at a vet’s office and the group wants to make sure the animals are socializing with people.
Hartness says the local group is thrilled to have other grassroots organizations that help animals and place them into good homes.
She praises the local volunteers who help the Humane Society, from the very active to those that can only help at special events. “We have fabulous supporters.”
But there’s always room for more. Hartness says the group needs more telephone volunteers — on weekdays, they get eight to 20 calls. “It’s not always something we can immediately take care of,” Hartness says. “People ask us our hours and want to bring us cats and kittens. We don’t have a shelter. We can’t take all of the kittens, puppies and grown dogs. We are limited to sick, injured, stray or abandoned animals.
“It’s hard to handle some calls, because people need or want something we can’t provide, but we’re happy to provide information on resources. Sometimes it’s educating them as to what’s available. It’s just hard when we get calls that we can’t do what the caller wants. We do make referrals to Animal Control for cruelty cases.”
Hartness emphasizes that the Humane Society cannot go onto someone’s property to take an animal away from a bad situation. “We have to operate within the law. It’s not that we don’t want to help.”
She praises local veterinarians who help out with expenses, and to people who drop donations by.
She hopes the fundraiser will be an event for children and adults. The Humane Society is going to do something like the baby of the year contest. People can post pictures of their pets, and people can vote with pennies.
They get constant requests for reduced cost spay and neuter clinics, and they’re hoping to get 40 procedures donated by the Sept. 13 celebration date.
Some of the good news for animals in the county is there seem to be fewer abandonments. But Hartness worries about the economy’s effect on pets. The group is not ruling out a shelter, and they’ve done lots of research.
“Any shelter can fill up in days,” she said. “We have to start with spay and neuter.” And the Humane Society is “ecstatic” about the plans for the county’s animal shelter, that will include a new wing for cats and a vet to care for the animals.