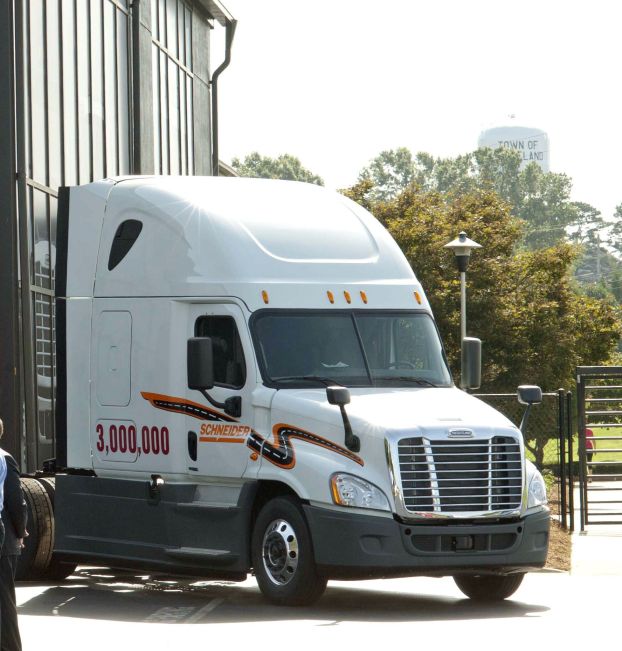 At its Cleveland plant in Rowan County Friday morning, Freightliner celebrated production of its 3 millionth truck in North America.
Since Freightliner took over the original M.A.N. Truck and Bus Corp. plant in 1989, a good chunk of those 3,000,000 trucks have come off the line in Cleveland. When it started back then, the Cleveland plant employed 124 people in a 277,000-square-foot operation.
Freightliner exploded in growth from there. By the fall of 1998, the Cleveland plant was churning out 150 heavy-duty trucks a day in a million-square-foot facility.
The plant manager described the Cleveland operation then as the “most sophisticated and technologically advanced truck manufacturing center in the hemisphere.” The pride in the quality of trucks produced in Cleveland has never wavered.
When the company announced it would be adding 500 jobs in 1998, 6,000 people showed up to apply at the Employment Security Commission.
By 2004, Freightliner’s Cleveland plant was Rowan County’s top employer, providing 3,700 jobs as it ramped up to a third shift.
Through the years, Freightliner built a $3 million training center and rented land from many property owners in western Rowan County so it could park finished trucks.
For a while, Freightliner also produced American LaFrance fire trucks in a sister facility next door to the main U.S. 70 plant.
The company has offered good wages and benefits. The workforce has been diverse, and a testimony to the good jobs is how far some employees have commuted each day to their jobs in rural Cleveland.
Freightliner’s huge payroll has had a rippling effect through Rowan County, and when business is booming at the plant, it also beefs up profits for suppliers spread throughout the state. As someone said once, there’s a lot of North Carolina in each truck.
Freightliner has been a key supporter of United Way, and its “Ride of Pride” trucks have often led the way to Washington, D.C., in honoring veterans. The town of Cleveland enjoys the lowest property tax rate among municipalities thanks largely to the presence of Freightliner.
In short, Freightliner has been a great corporate citizen for Rowan County. It also has introduced us over the past 25 years to the cyclical swings and supply-and-demand side of truck manufacturing and sales. That’s been more of a roller-coaster ride.
The news coming from the Cleveland plant has been sobering at times: the downturns in truck orders, the laying off of hundreds of workers, the loss of complete shifts, the Freightliner casualties looking for work at other places, truck production going to Mexico and the United Auto Workers local trying to negotiate better contracts.
After serious layoffs that accompanied the most recent recession, Freightliner’s Cleveland plant has slowly geared up again. As of Friday, the workforce was reported to be at 2,600.
The news might get even better, and more people could be making trucks here in the future. Just as likely, another downturn will be coming, along with serious cutbacks in personnel. By now Rowan Countians have read the playbook, and they know how this truck-making business works.
So we offer a hearty congratulations to Freightliner on its 3 millionth truck and brace for another roller-coaster ride.