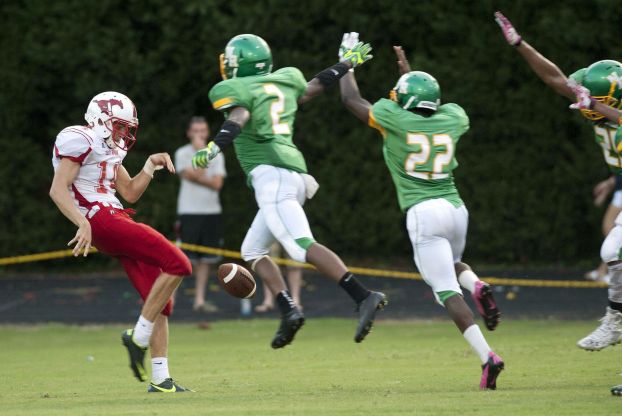 SPENCER — Jareke Chambers tweaked an ankle early, putting his pursuit of the North Rowan’s school rushing record on hold.
That didn’t stop Chambers’ running mate Andra Cowan from scoring three touchdowns and leading the Cavaliers to a dominating 43-21 victory against visiting East Rowan at Eagle Stadium.
North Rowan reeled off 43 unanswered points when it still mattered.
“Jareke was out, so I had to step up to the plate and do my job,” Cowan said. “A big shoutout to the offensive line for making some great holes.”
Cowan shouted loudest for teammates Malik McGee and Jim Herndon, who have come over from the defensive side of the ball. North Rowan had to replace all five offensive linemen, but it doesn’t look like run-blocking or pass-protection are going to be issues.
“North is just a really good football team and they played well,” said East Rowan coach Kenneth McClamrock after his first game as a head coach. “On offense, they know how to use their athletes to make plays, and their defense really attacked our kids.”
Defensive end Shane Parker did a lot of the attacking, sacking East Rowan quarterback Samuel Wyrick twice and pushing East Rowan into negative rushing yardage. Jake Pritchard and Wesley Jefferies also contributed sacks.
The Mustangs actually had the lead 16 seconds into the game after Max Wall returned a booming kickoff for a touchdown.
“We kicked it deep to their best player,” North Rowan coach Joe Nixon said. “Max made two guys miss and then he just outran us to the end zone. Yeah, you’d like to start the season off a little bit better than that, but I thought we responded well.”
East Rowan gathered additional momentum when North Rowan quarterback Alexis Archie threw under pressure and Dakota Hartsell intercepted for the Mustangs. East Rowan had a great chance to go up 14-0, but North Rowan’s physical defense stuffed running plays and forced a three-and-out. That series is where the game turned.
“The defense came through for us,” Archie said. “They started getting those three-and-outs and getting the ball back into the hands of the offense. We went from there.”
Archie’s 25-yard touchdown pass to Alonzo Sirleaf got the Cavaliers even, and North Rowan’s special teams put the Cavaliers ahead with a blocked punt after Jefferies sacked Wyrick near the goal line. Kenyaun Coney made the recovery for the go-ahead touchdown.
It was an avalanche after that, and East’s Rowan punting struggles — two were blocked and North got a piece of two more — continued.
The Cavaliers scored three touchdowns in a span of four minutes on a bruising run by Archie and Cowan’s first two TDs. Freshman Jacob Young was perfect on his PATS, and when Xavier Partee surprised the Mustangs with a 2-point conversion run, North Rowan took a secure 36-7 lead to the locker room at halftime.
“The key to that first half was our defense,” Nixon said. “They were out there for an awful lot of snaps, not because our offense was sputtering but because of the punt-blocks and some really fast scores. Our defense had to keep going and going and they never stopped.”
Cowan scored again from the 5 in the third quarter to make it 43-7.
To East Rowan’s credit, it kept playing, and Wyrick threw touchdown passes to Tre Gillespie (third quarter) and Naquis Caldwell with 3:29 left in the game to make the final score more respectable.
“We kept fighting, kept crawling, and we finished strong,” McClamrock said. “We were better tonight than in our scrimmage last Friday and we’ll keep getting better.”

As far as North Rowan is concerned, the Cavaliers already are good.
“They’re North Rowan,” Wall said with a shrug. “I don’t think there’s anything about them that’s not impressive. We let them get on us tonight, but we can fix the things we did wrong.”
The most impressive thing was that the Cavaliers, 13-1 a year ago, won in a breeze even with their marquee player watching from the sideline after the opening minutes.
“Jareke wanted to play, but we need him healthy,” Nixon said. “And it’s not like we’re a one-man team. We ran it well, we threw it well, and we played defense well. It was a good start.”