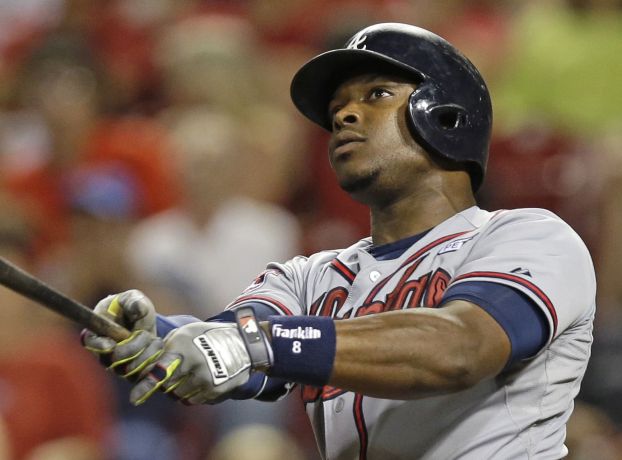 CINCINNATI (AP) — Justin Upton made the lost no-hitter a little easier to take.
Upton hit a two-run homer in the 12th inning Friday night, rallying the Atlanta Braves to a 3-1 victory over the Cincinnati Reds after left-hander Mike Minor came up four outs short of quite the gem.
Upton’s 25th homer off Manny Parra (0-1) gave Atlanta its seventh victory in eight games, a resurgence that has kept the Braves in the wild-card chase.
“Right now, we’re hot,” catcher Gerald Laird said. “Our guys are swinging the bat well. The big boys are driving in some clutch runs that we need.”
David Hale (4-4) pitched out of a two-on threat in the 11th. Craig Kimbrel got the last three outs for his 38th save in 42 chances.
The Reds managed only two hits — a pair of singles by Billy Hamilton — in their seventh consecutive loss. They fell seven games under .500 for the first time since 2009. Cincinnati (61-68) has dropped out of contention by going 10-24 since the All-Star break.
Minor has only one complete game in his career, but he held the Reds without a hit into the eighth, bidding to become the first Braves pitcher to throw a no-hitter since Kent Mercker in 1994.
Zack Cozart drew Minor’s fourth walk and advanced on a groundout. Hamilton lined an RBI single to center with two outs to end the no-hitter on Minor’s 107th and final pitch.
Minor has changed the grip on a couple of his pitches and pulled out of a funk with three consecutive solid showings.
“Just three weeks ago, I felt like I couldn’t get anybody out,” Minor said. “I felt more focused, but I’ve felt like that the last three games.”
And the defense was solid behind him, even though it didn’t have to make any spectacular plays to keep the no-hitter going so long.
“I thought our club played really, really well,” manager Fredi Gonzalez said. “All of them. They busted their butts for Mikey. They knew he had a no-hitter going.”
Cincinnati’s defense kept it in the game even though the Reds couldn’t get a hit until late.
Mat Latos gave up nine hits — matching his season high — but limited the Braves to one run in six innings with the help of several run-saving defensive plays.
Upton extended his hitting streak to 13 games with a single, helping the Braves load the bases with one out in the third. Cozart saved at least one run by making a diving stop on Tommy La Stella’s grounder to the hole at shortstop and getting a forceout at second, holding Atlanta to one run on the play.
Second baseman Brandon Phillips saved two more runs in the sixth. With runners on second and third and two outs, he made an over-the-shoulder catch of Jason Heyward’s fly to shallow right field.
Atlanta (68-61) stranded six runners in scoring position over the first six innings.
TRAINER’S ROOM
Braves: RHP Shae Simmons, who had to quit throwing at Triple-A Gwinnett because the back of his pitching shoulder was bothering him, is back in Atlanta getting treatment. There’s no timetable for when he’ll resume throwing.
Reds: LHP Tony Cingrani is still having problems with his left shoulder, preventing him from throwing. He was on the DL in May with a sore shoulder, struggled after his return and was optioned to Triple-A Louisville, where his shoulder began bothering him again.
ON DECK
Braves: Ervin Santana (13-6) has won his only other career start against the Reds, beating them 5-4 on April 25 at Turner Field.
Reds: Mike Leake (9-11) is trying for his first win since Aug. 3. He’s 0-2 with a no-decision in his last three starts.
CHEERS FOR THE COMMISSIONER
Commissioner Bud Selig was applauded by the crowd of 31,160 when he was shown on the videoboard after the first inning, sitting next to Hall of Famer Joe Morgan and Reds owner Bob Castellini. Selig was in town to help dedicate an urban youth academy.
STATS
Minor’s 7 2-3 innings were a season high. … Upton is batting .413 during his streak. He also had a triple on Friday. … The Reds are 0-5 against Atlanta this season, their most losses to the Braves since 2005. … Cincinnati is 3-9 in extra-inning games, losing its last six. … Phillips is 3 for 20 in four games since returning from a torn ligament in his left thumb.
———
Follow Joe Kay on Twitter: http://twitter.com/apjoekay