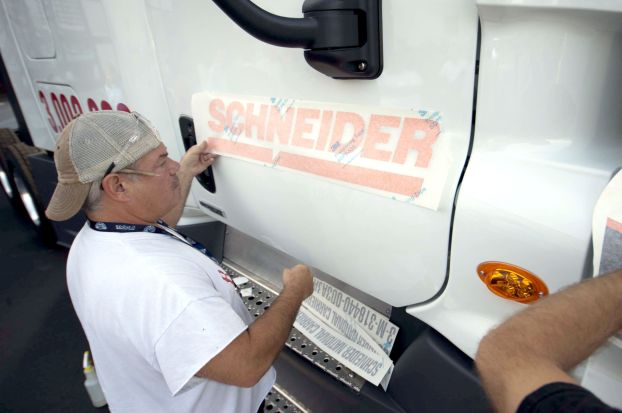 CLEVELAND — Daimler Trucks North America on Friday delivered its 3 millionth vehicle, a Freightliner Cascadia Evolution built at the truck manufacturing plant in Cleveland.
Daimler handed the keys to a customer from Schneider, one of the largest truckload carriers in North America, during a milestone ceremony at the Cleveland facility.
“Daimler Trucks North America is committed to pacing the industry in terms of engineering and manufacturing excellence, as well as production of vehicles that provide a real total cost of ownership solution for our customers,” said Roger Nielsen, Daimler CEO.
Nielsen credited employees at the Freightliner plant for excellence in manufacturing and thanked the union for working in partnership with Daimler.
“Like brothers, we often fight but at the end of the day, we love each other,” he said.
The 3 millionth vehicle is the first Freightliner Cascadia Evolution equipped with the new 6×2 DetroitTM integrated powertrain package. Featuring the Detroit DD15 engine, Detroit DT12TM transmission and Detroit axles, the integrated Powertrain provides state-of-the-art component communication to achieve the highest level of performance, Daimler said.
The new Detroit integrated powertrain will be available in full production in the Freightliner Cascadia Evolution in January 2015.
“The Detroit integrated powertrain exemplifies the pioneering, innovative spirit that has propelled Freightliner to undisputed market leadership in the commercial vehicle industry in North America,” said Richard Shearing, vice president of national accounts for Daimler.
Daimler is the only original equipment manufacturer that designs, engineers and manufacturers a completely integrated powertrain, Shearing said.
Steve Duley, a vice president for Schneider, took possession of the landmark truck.
Schneider has about 14,000 drivers with roughly 10,000 trucks on the road each day. Duley said Schneider relies on Freightliner trucks to help the company recruit and retain drivers, which he said is a challenge in the trucking industry.
Freightliner tractors are comfortable, safe and the vehicle of choice for the majority of Schneider drivers, he said.
“A milestone like the one Daimler is celebrating today is no small feat,” said Rob Reich, senior vice president at Schneider. “We have owned more than 25,000 Freightliner trucks over the years and are honored to have the company’s 3-millionth truck join our fleet.”
Daimler operates five factories in North Carolina with 8,000 employees, including about 2,600 at the Cleveland plant, which makes the company one of the largest employers in Rowan County.
Daimler was founded in 1942 when Leland James began manufacturing trucks in Portland, Ore., as the Freightliner Corporation. In 1981, Daimler-Benz AG (now Daimler AG), one of the world’s premier automotive companies and builder of heavy-duty commercial vehicles, purchased Freightliner Trucks from Consolidated Freightways, and in the following decade, vehicle sales more than doubled.
With technological resources, Daimler-Benz helped Freightliner Trucks reach the top of the North American heavy-duty truck market by 1992. Daimler Trucks North America is North America’s leading manufacturer of commercial vehicles, selling more than 140,000 commercial vehicles annually through its manufacturing network in the United States and Mexico including the Cleveland plant.
Contact the newsroom at 704-633-8950.

SALISBURY — Long-awaited wayfinding signs that are supposed to help tourists and residents alike find their way around Salisbury are one... read more