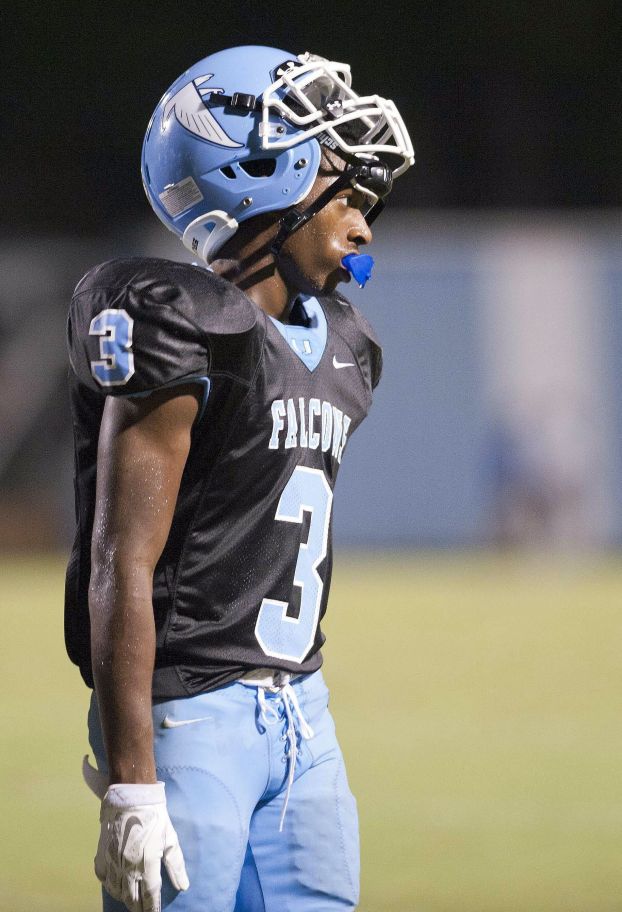 MOUNT ULLA — It’s already been a long year for West Rowan’s football team.
At least, Friday night’s season-opener against visiting Mooresville felt that way to well-decorated head coach Scott Young.
“Oh yeah,” he said after the Falcons received a 49-21 dose of tough love. “That doesn’t happen too often. We’ve won many, many games in the past by winning the in trenches. We got beat badly in the trenches tonight.”
Mooresville’s offensive line owned the night, helping the Blue Devils churn out 501 yards of total offense — including 356 on the ground. West answered with 236 yards total offense, but most of that was produced in the second half against the guests’ reserves.
“It just felt like we were soft all night on the defensive line,” said West linebacker Dearius Phillips. “Their OL definitely outworked our DL.”
It didn’t help that West Rowan tackled like a flag football team, often swinging-and-missing when it should have been connecting against Mooresville’s hurry-up offense.
“We’ve got to wrap up better than that,” Phillips added. “I’d give us a one out of 10. Not very good.”
Mooresville senior Akease Rankin ran like he’d been dipped in grease, zigging and zagging and freewheling his way for 161 yards and three touchdowns before taking most of the second half off. Quarterback Tommy Bullock completed 7 of 9 passes — all in the first two quarters — and ran for a couple of scores.
“Yeah, but you’ve got to give credit to those big hogs up front,” said Mooresville coach Hal Capps. “They wore West Rowan down. They’re explosive, agile and quick. They’ve bought into our philosophy to attack and they love doing it.”
The game turned in the second period when Mooresville reached the end zone four times and mounted a 35-7 halftime edge.
“We heard about them and their big linemen,” said Falcons’ senior Harrison Baucom. “But until you line up against them you don’t know how good they are. I honestly think we stood our ground on some plays.”
West Rowan trailed 14-0 when sophomore Kortez Weeks returned a kickoff 65 yards down the left sideline to the Blue Devils’ 19, then scored two plays later when quarterback Kacey Otto lofted his first career touchdown pass to Shakir Simmons. Otto finished 5 for 9 and had an interception returned for a touchdown in his varsity debut.
“He was tough under pressure,” Young said after Otto was sacked three times. “He got popped a lot. We probably didn’t protect for him that well — sometimes because we missed protection, sometimes because they brought more than we could block.”
When Mooresville took the second-half kickoff and drove 73 yards in six plays for another score, the Falcons were doomed. Bullock, who rushed for 81 yards and passed for 145, gave the Devils a five-touchdown lead when he spun into the end zone on an 11-yard burst early in the third quarter.
“We do a lot of work in practice on that up-tempo offense,” he said. “You try to get every play off in eight seconds or less.”
If there was a bright spot for West Rowan it was Baucom, who rushed for 114 yards and two touchdowns in his first game at running back. He capped a 91-yard scoring drive in the third quarter when he took a handoff from Otto and scored on a 4-yard run.
“Things were starting to develop for us,” he said. “We finally got an idea of what to do on every single play.”
Baucom added to his sparkling effort in the fourth period. West’s most-sustained drive of the game covered 80 yards on 16 and melted more than eight minutes off the clock. Baucom finished it — and closed the scoring — with a 1-yard TD plunge with 21.3 seconds remaining.
Afterward Bullock was quick to credit his man-sized offensive line and Rankin, the scatback who ran for more than 2,100 yards a year ago.
“The line opened a lot of holes,’ he said. “The middle was usually wide open. And they did a good job pass blocking and sticking with their blocks.
“(Rankin) is one the best backs in the state,” Bullock continued. “It’s great to have him there. You hand him the ball and you know he’s going to get you yards.”