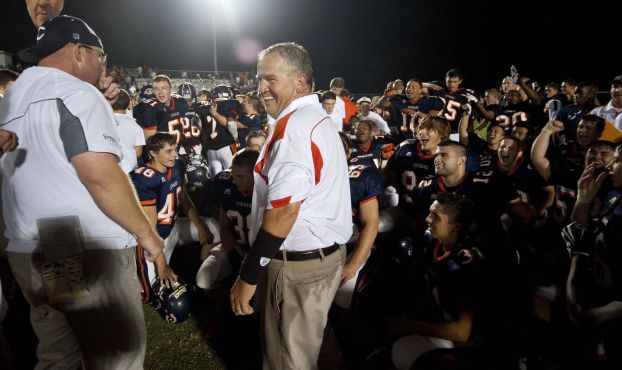 CHINA GROVE — The video is dark, but it’s clear to see what’s happening. Carson head coach Joe Pinyan and his assistants took the Ice Bucket Challenge. Players turned up coolers full of cold water and ice and gave their coaches a cold chill running down their back.
Pinyan said about six players dumped water on him. Senior defensive back Jonathan Rucker was one of those.
“It felt pretty good,” Rucker said. “It was like the players got the chance to freeze coach with ice and water after yelling at us at all the practices.”
Carson assistant Daniel Pinyan, Joe Pinyan’s nephew, was challenged by his brother, and Daniel Pinyan passed it on to the Carson coaching staff.
Pinyan looked up the Ice Bucket Challenge to see what it was all about. He said a feature story on ESPN about former Boston College outfielder Pete Frates, who was diagnosed with ALS in 2012, asking anyone and everyone to do the Ice Bucket Challenge and raise awareness for the cause. Video of Frates’ challenge sparked the viral movement that has spread on YouTube and social media.
Pinyan, who went to Appalachian State, also knew the struggles of the late Bob Waters, the head coach at Western Carolina from 1969-88. Waters fought ALS for six years before passing away in 1989. He was 50.
“It kind of hit home there, I told our coaches, ‘Listen, we’re going to step up to the challenge, and not only are we going to step up to the challenge, we want to challenge all the other coaches in the county and make it a fun thing and bring awareness to our community,” Pinyan said.
In Pinyan’s video, he throws down the gauntlet for all football coaching staffs in Rowan County.
“Then we threw our principals in there, and things just kind of blossomed from there, and the principals have gotten a kick out of it,” Pinyan said.
If more than $1,000 is collected, Carson principal Angelo DelliSanti and Salisbury principal Luke Brown will get drenched in cold water and ice at halftime of the game. There will be areas to collect donations for the ALS Association.
“We’re not only hoping for a great game but a great turnout to try to make a donation from both of our great schools,” Brown said.
The schools already have $250.
“I think we’re going to blow $1,000 out of the water,” DelliSanti said.
That would be a drop in the bucket. This nationwide movement has involved professional athletes and celebrities. The Ice Bucket Challlenge, inspired by Frates, has raised more than $40 million for the ALS Association.
Coaches and administrators at South Rowan completed it. A video was posted on Facebook of North Rowan head coach Joe Nixon and his assistants getting soaked.
“It brings a lot of attention to the cure for the disease,” Pinyan said. “I know they need money to find this cure, and I’m not sure if we can ever give them enough money. But whatever it takes to keep from people losing the length of their life that they should have, that’s something we all as human beings can pitch in and do.”