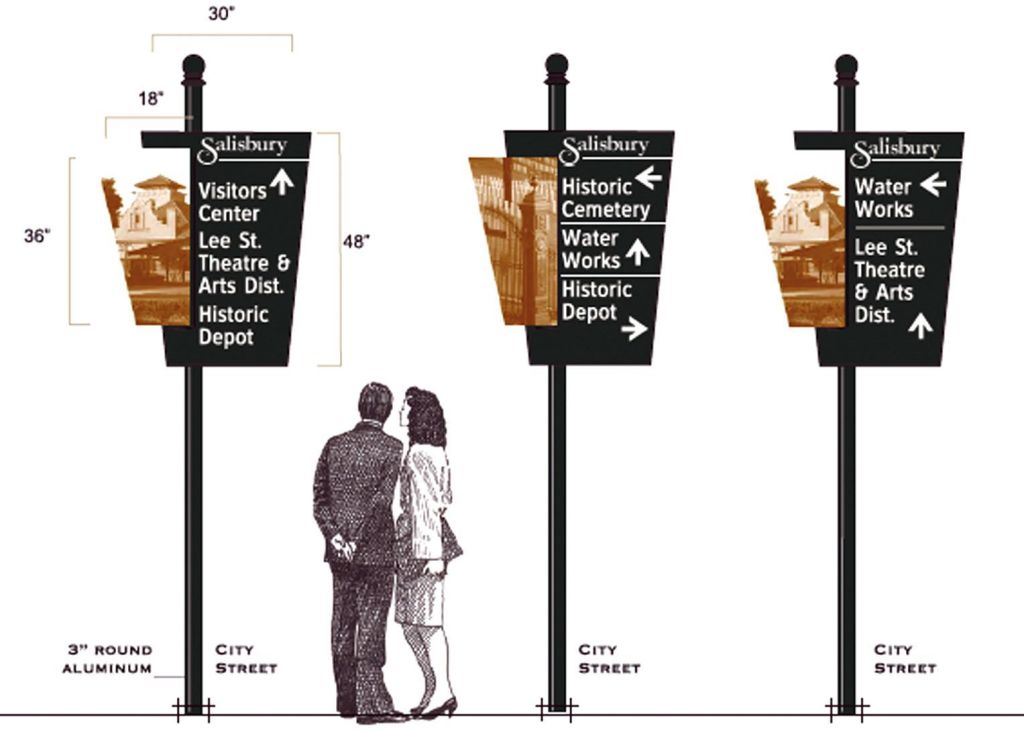 SALISBURY — Long-awaited wayfinding signs that are supposed to help tourists and residents alike find their way around Salisbury are one step closer to appearing in the city.
“This is long overdue,” Bill Burgin, chairman of the tourism board, told City Council this week.
Burgin and James Meacham, executive director for the Convention and Visitors Bureau, sought approval for the signs, which first appeared on City Council’s list of goals in 2006.
“Every aspect of this plan has been vetted over and over,” Meacham said.
Council members gave their blessing Tuesday and agreed to submit a request to the N.C. Department of Transportation, which has the final say on the design and wording of the signs. The Convention and Visitors Bureau will pay $190,000 for 53 signs with money from the hotel room tax and did not ask City Council for funding, although they did request help from city staff to install the signs, which stand up to 14 feet high with the bottom of the sign about 7 feet from the ground.
Meacham said he has set aside $10,000 for sign maintenance and replacement.
The new signs will remove clutter, Meacham said, as 47 will replace existing signs, including many of the DOT blue information signs.
The signs are designed to do the following:
• Improve navigation
• Increase awareness of key locations, sites and attractions
• Create a greater sense of place
• Provide a consistent and uniform system of signs
• Improve visitor and citizen experiences
Signs in phase one will appear downtown and on Innes Street from Interstate 85 to Statesville Boulevard. Phase two includes Jake Alexander Boulevard from the interstate to Statesville Boulevard and Statesville Boulevard to Innes Street.
Phase three includes Julian Road and Old Concord Road.
Buzz Bizzell, a wayfinding signage consultant in North Carolina, designed the signs. Six signs will direct motorists to parking, and all signs will include a photo of a local landmark and up to five destinations on a decorative pole similar to a lamppost.
“They will reflect not only directions but also the flavor of the community,” Meacham said.
While the signs cannot include the name of a business, they will direct people to activities like shopping, dining, theaters and lodging. The name of the hospital will appear as Rowan Medical Center because the state will not allow brands like Novant on a sign.
“The beauty of this, in addition to reducing clutter, is a real sense of place, a consistent look and feel throughout the community,” Mayor Pro Tem Maggie Blackwell said.
Pedestrian signs are slightly smaller than motorist signs.
Clyde, a local artist who only uses one name, told council members he has attended many meetings about the signs but did not have the chance to air his concerns. He wanted Bizzell to include unique Salisbury features on the signs, such as historic windows and brackets, but said the consultant did not return his calls.
“We don’t have a chance to say anything about what these signs look like, so what we got is computer-generated art by an out-of-town consultant,” Clyde said.
He also said he’s concerned the signs will have inaccuracies and pointed out what he said is an error on the city seal above City Council’s dais. Clyde said the date on the seal, 1753, should be 1755.
Mayor Paul Woodson asked city staff to look into whether the seal is correct.