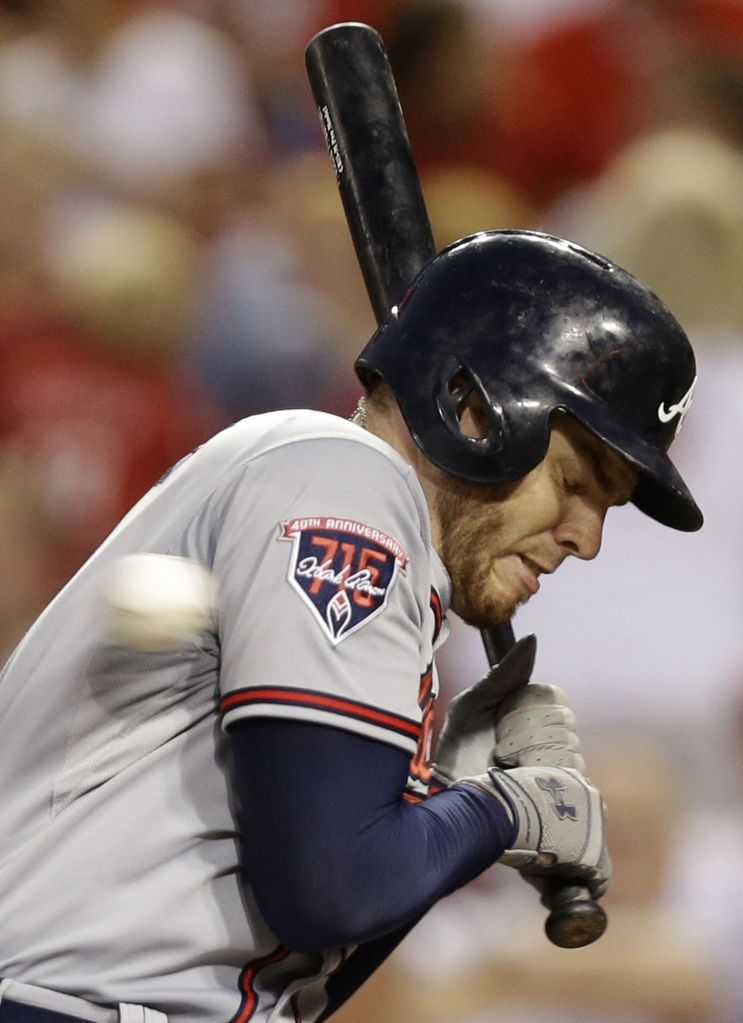 CINCINNATI (AP) — Atlanta’s rallies came so often and went so long that manager Fredi Gonzalez worried his starter would lose his touch while sitting on the bench.
That’s a good problem to have.
Justin Upton extended his hitting streak to 12 games with a bases-loaded single during Atlanta’s decisive third inning, and the Braves extended their offensive resurgence with an 8-0 victory over the fading Cincinnati Reds on Thursday night.
Atlanta sent 11 batters to the plate in the third for five runs. Jason Heyward got it started with a single off David Holmberg (0-1) and drew a bases-loaded walk that finished the rally. Upton singled home a pair of runs during the inning and later added a sacrifice fly.
“We got on ‘em early,” said Freddie Freeman, who walked, was hit by a pitch twice and scored a pair of runs. “We got on base for the middle of the lineup, and Justin’s been awesome.”
Julio Teheran (12-9) went six innings and allowed four hits by the Reds, who have lost six in a row. His biggest problem was staying loose while the Braves offense had its way with Cincinnati.
“Julio was good,” Gonzalez said. “It was tough to pitch today. We had some long innings and he was sitting on the bench for a long time. But he kept his concentration.”
Teheran went into the clubhouse and stretched while the innings went on and on.
“It was difficult,” Teheran said. “I was trying to stay warm and trying to stay loose.”
The Braves have won six of their last seven games, scoring at least seven runs four times. They remain seven games behind Washington in the NL East, the product of their 15-18 mark since the All-Star break.
Cincinnati fell a season-high 10 1/2 games back — its biggest deficit since the end of the 2011 season — with its 11th loss in its last 13 games. The Reds are 10-23 since the All-Star break, tumbling out of playoff contention.
Holmberg retired only eight batters. The left-hander gave up six runs and five hits, walked four and hit two batters in his second start for Cincinnati.
Andrelton Simmons hit his seventh homer in the second inning to put Atlanta ahead. He also drove in a run with a groundout.
Skip Schumaker pitched the ninth for Cincinnati, walking one and throwing a fastball that hit 90 mph on the radar gun. It was the utility player’s fourth career pitching performance.
TRAINER’S ROOM
Braves: Gonzalez was waiting for a medical update on right-hander Shae Simmons, who had to quit throwing at Triple-A Gwinnett because the back of his pitching shoulder was bothering him.
Reds: Manager Bryan Price said 1B Joey Votto has started jogging, but isn’t doing any baseball-related activities. Votto has been on the DL since July 8 with strained muscles above his left knee.
UP NEXT
Braves: LHP Mike Minor (5-8) won both of his starts against the Reds last season, allowing three runs in 14 innings.
Reds: RHP Mat Latos (4-3) is 2-0 with a 2.70 ERA in his last four starts. He is making his 13th start in a season cut short by two injuries.
MOVES
The Reds sent struggling relievers J.J. Hoover and Carlos Contreras to Triple-A Louisville. They brought up Holmberg and right-hander Pedro Villarreal, who relieved Holmberg in the third inning. Villarreal also singled in the third for his first big league hit.
OVERTURNED
Heyward got a single to open the five-run third inning when the Braves challenged a call that Schumaker had made a diving, backhand catch of his sinking liner to left field. The replay showed the ball was trapped and the call was overturned. And the big inning had begun.
STRUGGLES TIMES TWO
Holmberg, acquired in the Ryan Hanigan trade, has faced 37 batters during his two starts and allowed 21 of them to reach base: 12 hits, seven walks, two hit batters, four homers.
STATS
Upton is 16 for 40 with four homers and 18 RBIs during his hitting streak. … Heyward is 8 for 17 with a homer in his last four games. … Cincinnati 2B Brandon Phillips is 3 for 15 in four games since returning from a torn ligament in his left thumb. … Reds closer Aroldis Chapman, who had a sore shoulder over the weekend, pitched the eighth inning and retired all three batters with pitches clocked at 100 mph. … The last Reds position player to pitch in a game was Paul Janish in 2009 at Philadelphia.
———
Follow Joe Kay on Twitter: http://twitter.com/apjoekay