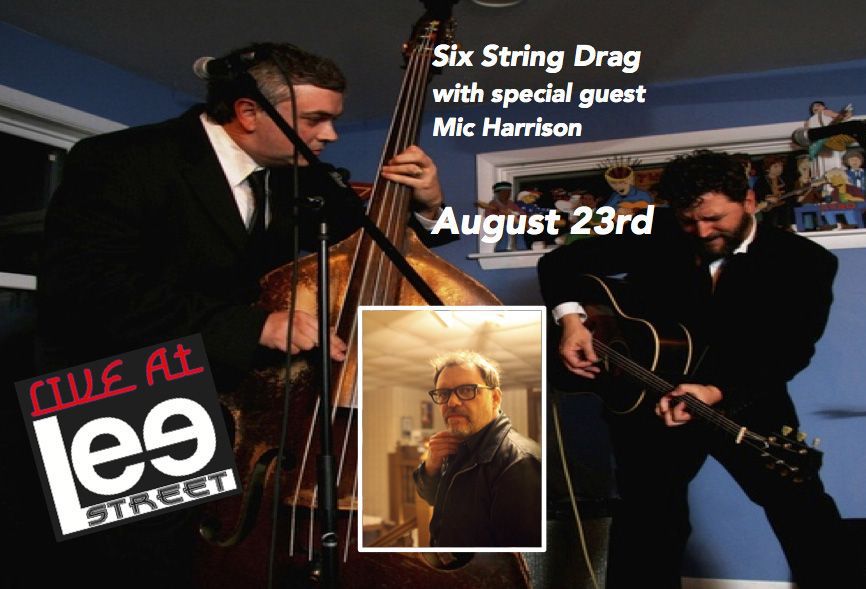 Lee Street Theater will host 10 nights of music throughout the 2014-15 season beginning Aug. 23, with two outstanding American roots-rock acts with strong regional ties: 6 String Drag; and Mic Harrison (of Mic Harrison and the High Score).
The Raleigh-based band 6 String Drag, fronted by Kenny Roby, and opening-act Mic Harrison, of Knoxville, Tenn., have incredible reputations within the roots-rock community thanks in large part to the fact that both made big waves in the 1990s.
New music by both groups have them back on the road doing what they love most. Roby and his friend Rob Keller, who plays bass and sings beautiful harmony, were discovered by country-rock legend Steve Earl in 1996 and signed to his label, E-Squared, and began touring the country to critical acclaim. Likewise, Harrison found success with the Knoxville band the V-Roys, also on Earl’s record label. In 2009, the V-Roys were voted best Knoxville band ever by the readers of the city’s Metro Pulse newspaper.
Thought-provoking lyrics, talented musicianship and a desire to connect with the audience in a deep and meaningful way are the qualities that these musical acts share. The result is American rock and roll that rises far above that which can be found on commercial radio.
Like many rock and roll bands, Roby mentions the Kinks and the Replacements as some of his all-time favorite influences, in addition to some styles of music such as show tunes and even vaudeville music.
Mic Harrison, who now fronts his own band, Mic Harrison and High Score, echoes many of the same sentiments as Roby when speaking of his own musical influences and the direction his music is headed now. But more specifically, the death of Harrison’s father last September of complications from Alzheimer’s disease has really given his music a specific focus and imagery that harkens back to his rural Tennessee upbringing.
Tickets for 6 String Drag and Mic Harrison are $15 plus tax and can be purchased at leestreet.org, by phone at 704-310-5507, or at the box office at 329 N. Lee St.
Complete Lee Street theatre concert schedule:
Aug. 23 – 6 String Drag; Mic Harrison & High Score

April – To be announced

Diane Hoffman and NC Facedown Band
Friday 9 p.m. – midnight
$5 cover
Diane has played here in Salisbury to very enthusiastic crowds before. A native of Salisbury, Diane has been active on the Myrtle Beach, SC music scene for the last 10 years.
She has performed with the southern greats such a Little Soul and fronted her band The Endeavor along with her acoustic duo Double Shot. Diane has entertained on many well-known stages in North and South Carolina.
A regular at such venues as The House of Blues, Hard Rock Cafe and Broadway at the Beach, as well as many others, she is now lead vocalist for her bands Facedown and the Diane Hoffman Trio.

Scott Gibson
Saturday 9-11:30 p.m.
No cover
Lexington’s own Scott Gibson, with his unique brand of Americana/folk music, comes to the Grapevine stage.
Scott Gibson’s music will guide you in search of the truth underneath life’s overbearing canopy. He makes lyrical promises that you are never alone, and the chords he sets free, from guitar and harp alike, are a strength; a conviction; indeed, an all-out pledge to crash through walls with you.
In Scott’s stories you will meet some unique and interesting characters; characters who are, in truth, you.
###