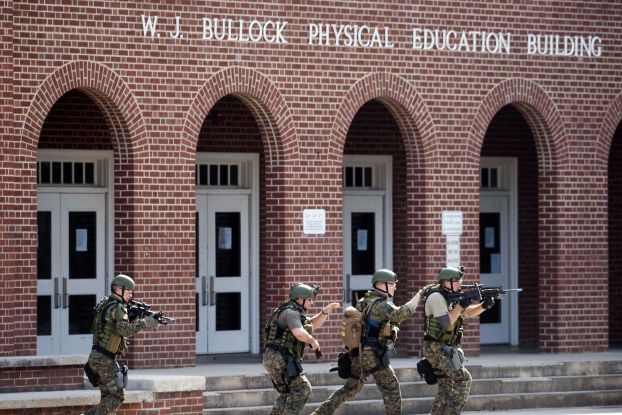 KANNAPOLIS — Emergency workers in Kannapolis knew they’d be training Wednesday, but they had no idea what was coming their way.
The crisis drill scenario unfolded at A.L. Brown High School around 9 a.m. — what started as a scuffle quickly turned into an unknown number of active shooters inside the school building.
The Kannapolis police and fire departments responded quickly, and by 9:07 a.m. the school was on lockdown, as well as Kannapolis Intermediate and the district’s central office.
Police gingerly approached the school with weapons raised, methodically infiltrating the building as they arrived.
Gunshots and shouts could be heard periodically through an open window on the third floor.
“Active shooter,” “administrator down,” “casualty in 225” and other alarming phrases came through the static on the scanners as school administrators listened to the drama unfold from the outside.
Emergency officials set up a command post and established a no-fly zone above the school. Fire and EMT personnel set up a triage area.
At the same time, heavily armed officers guided EMTs into the building to treat those who had sustained simulated injuries. As they could, those injured were transported out of A.L. Brown and taken to waiting ambulances.
As a part of the simulation, at least one officer and multiple participants pretended to be killed or injured.
All shooters were out of play around 11:30, and the school was taken off lockdown at 11:33 a.m.
“We were in the room next to where the shooter was and they were holding the students hostage, and we heard a lot of that,” said Colleen Frawley, the curriculum coordinator for Kannapolis Intermediate School.
“We could hear the gunshots — we could hear it right next door to us, and that was a little unnerving,” she said.
Joseph Watson, an English as a second language teacher at A.L. Brown, was in the classroom across from the shooter who barricaded himself in the classroom with hostages and said they could hear the police trying to talk to the shooter.
“It was good to get a real scenario,” he said.
“You can run through it in your mind,” Watson said, but added that “your actual reaction is different.”
“It was a little intimidating at times — especially hearing the gunshots outside the classroom,” said Kelly Wright, a health and physical education teacher at A.L. Brown.
Wright played a student in the simulation and was inside a classroom throughout the scenario.
Once the threat was sequestered to one area, emergency personnel evacuated as many of those inside as possible. They left the building in single file with their hands on their heads and were led to another secured building on the campus.
“We had two people injured in our class and they came through and evacuated those people and then evacuated us to the band room afterwards and got everyone out,” Wright said.
“I think it went really well,” said Kannapolis Police Chief Woody Chavis.
He said that while the emergency personnel did many things right, some things were done wrong.
Responders need to “make sure we take advantage of the mistakes we made so we don’t make them again,” he said.
Teachers said the drill helped them understand how to act if a crisis hits their school.
“It helped us put into perspective as teachers what we could do with students,” Wright added. “Having about 10 people in there gave us an idea of, if we had 30 kids, what we could do to try to better help the situation on our own.”
Frawley said the drill caused her to look at everything from both a teacher’s and an administrator’s viewpoint.
“I kept thinking, ‘If I were in this situation for real, what would I do? Would I run or would I stay?’ ” she said.
“I thought it was a valuable tool for teachers to experience, for administrators to experience and also for all the safety personnel to experience,” Frawley said.
The drill involved 35 Kannapolis police officers, but Chavis said in a real situation, they would have “needed three times that many.”
He added that in an actual situation, however, there would be at least 200 officers there from the surrounding area.
A number of other agencies were involved — Kannapolis, Landis, Locke and Concord fire departments played a role, as well as the Cabarrus County EMS and Sheriff’s Department.
The entities had to figure out how to work together and deal with active shooters, hostages, casualties and injuries. They used the drill as a learning experience and an opportunity to look for holes.
The crisis drill was the “most extensive” training exercise the city has ever done, Chavis said.
“This is an endeavor almost two years in the making,” said Ellen Boyd, director of community relations for Kannapolis City Schools.
On Dec. 12, 2012, just two days before the mass-shooting at Sandy Hook Elementary School, Kannapolis City School and Kannapolis Police Department officials met to discuss ways to improve safety in the district’s schools. They decided to do threat assessments at each school, have officers talk to staff about how to handle threatening situations and led tabletop drills at summer leadership retreats — all leading up to Wednesday’s drill.
The last time the city held a drill like this was in June 2007, but it wasn’t as extensive.
“Tactics since 2007 have changed,” Chavis added.
The Kannapolis school system also has a number of new people in leadership this year, making the timing perfect, Boyd said. Wednesday was the first optional workday for Kannapolis teachers, and nearly 300 of them decided to be a part of the drill.
“It’s just really important for parents and the community to understand they’re training to be prepared,” Boyd said.
“We’re really concerned about the safety of their children,” Chavis added.

By Susan Shinn For The Salisbury Post CHINA GROVE — In many families, recipes are lovingly passed down through the... read more