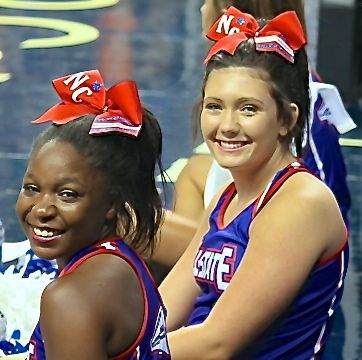 Cheerleaders ‘do everything together’ — including all-state

Karlee Eagle and Kristin Parker do everything together — they’re seniors at East Rowan High School, co-captains of the varsity cheerleading team and best friends.
Eagle and Parker both also were members of the all-state cheerleading team this year.
They were nominated for all-region during their junior year by Coach Taren Davis, and had to submit videos of them individually completing a variety of standards, including cheering, dancing, doing two jumps, standing tumbling and running tumbling.
“They made all-region and were recognized at the State Cheerleading Competition in February,” Davis said in an email.
In May, they participated in a live audition for all-state. They learned a cheer and a dance, and worked on stunts. They were evaluated and accepted to the all-state team, along with roughly 30 other girls from across the state.
All-state was a five-day event, filled with daily practices. The mornings came early, and they practiced late into the night. The cheerleaders cheered at the all-state east-west football and basketball games.
During the week, Eagle and Parker made new friends, learned leadership skills and learned new cheers and stunts.
“It’s fun to pep up the crowd,” Eagle said.
“It is important because they get to have some recognition for all the time and hard work they have put into cheerleading and to showcase their talents. They also got to meet girls from all over the state and learn from them,” Davis said.
Parker started cheering when she was 5 years old. Before that, she was a gymnast and thought it would be fun to give cheerleading a try.
Eagle has been cheering since third grade.
“I liked how they did all the stunts and worked together as a team,” Eagle said.
The pair cheered together at Erwin Middle School, and were on the junior varsity team at East Rowan their freshman year. Eagle moved up to the varsity team for the competition season her freshman year, and they both made it on the varsity team their sophomore year — a position typically reserved for juniors and seniors.
East Rowan cheerleaders essentially have three seasons — football, basketball and competition. “We practice as much as everybody else does and we do as much as everyone else does — especially when we go all year round,” Parker said.
During football and basketball seasons, the girls cheer on the East Rowan Mustangs. During competition season, they compete against other schools and are judged on their routines.
“I like going to competitions and competing in front of a bunch of people and doing stunts and working as a team,” Eagle said.
“Cheerleading is a long season at East,” Davis said. “We are one of the few schools that still does all three, so the cheerleaders really have to learn how to time-manage as well as get along with others in sometimes stressful times.”
Between competing at a competition gym year-round and cheering at school, Eagle and Parker don’t have time for much other than cheering.
“I don’t do anything else other than cheerleading,” Eagle said.
“It’s pretty much a 24/7 commitment,” Parker said.
Eagle and Parker aren’t the first East Rowan cheerleaders to go to all-state. Lindsay Kluttz went last year.

By Susan Shinn For The Salisbury Post CHINA GROVE — In many families, recipes are lovingly passed down through the... read more