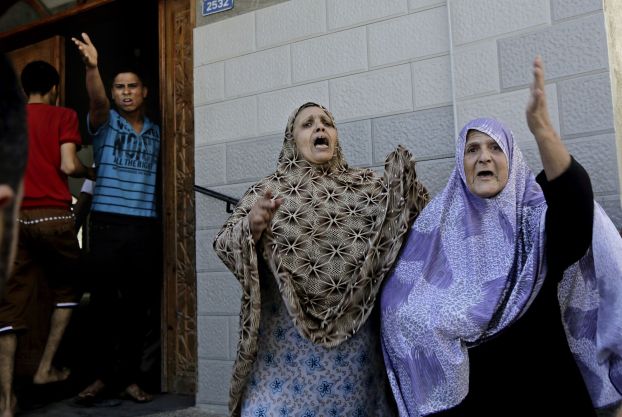 Your daily look at late-breaking news, upcoming events and the stories that will be talked about today:
1. OFFICIALS: RESCUE MISSION FAILED

Obama sent special forces to Syria this summer to save Americans held by the Islamic State, but they failed to locate any — including journalist James Foley.

The U.S. attorney general tells community leaders of the humiliation he felt after having his car searched after he was twice pulled over in New Jersey.

3. WHOSE HAND MAY HAVE TORPEDOED GAZA TRUCE

Some Palestinian and Israeli officials say Qatar pressured Hamas to reject a lasting ceasefire to undermine Egypt’s efforts in that regard.

Three senior military leaders in the militant Palestinian group are killed in a raid in southern Gaza.

The government wants to find a "win-win" solution for demonstrations that are besieging parliament and demanding the prime minister’s resignation over alleged election fraud.

Bank of America has reached a record $17 billion deal with the government to resolve an investigation into its role in the sale of mortgage-backed securities before the 2008 financial crisis, officials say.

The AP’s Robert Burns reports that the sailors are being kicked out of the service for their roles in a cheating ring at a nuclear power training site.

The world’s largest consumers of ramen are spurning a U.S. study that links the beloved fast-food staple to some risks for heart disease.

As Americans’ appetite for the sport grows, international clubs seek to increase their fan base and find the next Leo Messi in places like South Florida.

10. WHERE LGBT TOURISTS ARE BEING LURED

Las Vegas is making sure the LGBT community knows it is welcome in the world’s marriage mecca–even if gay marriage is still banned in Nevada.

Your daily look at late-breaking news, upcoming events and the stories that will be talked about today: 1. U.S. HAS... read more