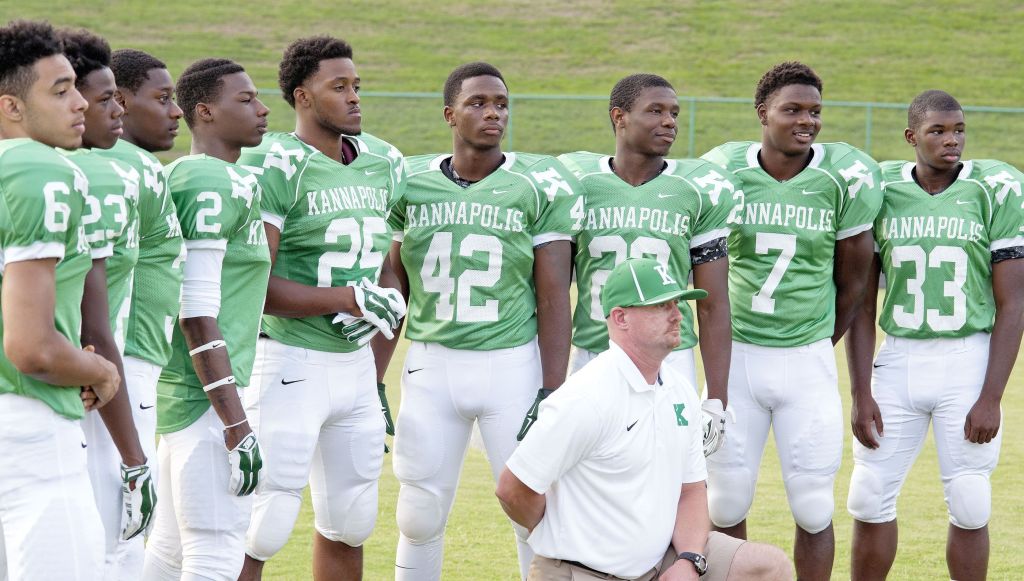 KANNAPOLIS — A.L. Brown players cheered and high-fived after completing a touchdown pass in a 7-on-7 scrimmage with a 3A opponent, but head coach Mike Newsome quickly curbed enthusiasm.

“The thing is, that pass was close and barely got through,” Newsome said. “Throw that same pass against Mallard Creek, and it gets intercepted. We’ve got to throw a better pass. Every play we run in practice, we need to run it like we’re playing against Mallard Creek.”

Mallard Creek could be the best team in the state again, and Mallard Creek is in A.L. Brown’s 4A MECKA conference. Hough also is in that eight-team conference, and Newsome and just about everyone else, believes Hough has a chance to be one of the five best teams in the state.

And then there’s Vance.

Vance, which started a dozen sophomores a year ago, may have as many athletes as anyone.

Vance has younger, less polished, less experienced talent, but it’s awesome talent nonetheless, and Vance will come at the Wonders out of the spread this season instead of the old-fashioned Wing-T.

“You look at the returning rosters and you know Mallard Creek and Hough will be great teams,” Newsome said. “Vance has a new coach with a system that probably will fit their talent better.”

Newsome’s own roster would be considered big and fast if the Wonders were still 3A, and Brown probably would be a preseason top 10 in 3A.

But in 4A, there are going to be nights when A.L. Brown is simply physically overmatched.

“It’s not like we’ve got the Ethan Hortons (Ethan’s son plays for Mallard Creek) and Mike Mortons walking the halls here now,” Newsome said. “We’re a good football team, but I’m not sure everyone realizes that we’re not just a small 4A school, we’re a small 4A school that’s playing in the best football league in this state by far. People can talk about other conferences all they want to, but it’s the Charlotte teams that are winning state championships.”

Still, challenge is what coaches live for, and the Wonders’ coaches are looking forward to their second season in the MECKA.

In its first 4A season since the 1980s, Brown lost to Mallard Creek 49-7 and fell to Hough 14-0. The Wonders also lost to rival Concord early and to MECKA foe Hopewell and playoff opponent Charlotte Catholic late when they were horribly banged up. Eight starters were out for the Catholic game.

The bottom line in 2013, even with a defensive shutdown of Weddington and shootout victories against Berry and Vance, was 7-5. While the string of winning seasons continued, that was the most losses for the Wonders since 1996.

Newsome, who won state titles at Matthews Butler, isn’t ready to accept 7-5 as the new norm, and he believes the Wonders will do better if they can just stay healthier.

“We had 20 players miss games in 2012 with injuries and we had 21 players miss games last year,” he said. “Injuries have just killed us and we’ve got to keep away from the injury bug. If we can do that, we can compete with about anyone. I believe we’ll be a lot better offensively and at least as good on defense.”

Newsome’s optimism about the offense is based on a host of returners, including four starters on the offensive line. Josh Barlow (260 pounds), Braden Harrington (200), Hunter Lomax (230) and Pierre Mills (215) return.

“They’ve got the body types you look for,” Newsome said.

They’ll be blocking for a solid group.

Slot man Casey Walker also is back. Walker rushed for 529 yards and had 144 yards in receptions.

Jalyn Cagle, who starred for the jayvees and added a couple of varsity TDs, will get touches.

Daveon Perry will be a DB first, but he adds explosiveness when he moves over to offense.

“Daveon has been lights out, whether he’s a safety, slot receiver or kick returner,” Newsome said.

The receiving corps will miss East-West All-Star Johnny Delahoussaey, but 6-3, 190-pound sophomore Sherrod Sutton was the sensation of preseason and may have the biggest upside of any Wonder.

Seniors Brylan Weaks and Dyquan St. Louis will catch their share of passes, and DB Khari Wilkes will help out on offense some.

The quarterback spot is the most-up-in-the-air offensive position and probably will go down to the last minute of the last practice before opening night.

One candidate is Damon Johnson, a junior who rushed for 330 yards and threw for 609 yards and nine TDs last season. He started some games after Andrew Ramirez broke a hand.

Athleticism is in Johnson’s favor. He can make plays with his legs as well as his arm.

Sophomore Josh Endicott is a different kind of QB. He’s 6-foot-6 and a pocket passer. Physically, he reminds Newsome of former Concord QB B.J. Beecher. Endicott has attended a lot of camps and has had extensive training, and that gives him more reps than the standard sophomore.

“It’s as close a quarterback competition as any I’ve ever been involved with in coaching,” Newsome said. “They both do good things, but they both make mistakes. We’d like for one guy to separate himself, but I think we can be good with either one starting. We may have a dual system and play both if that’s what’s best for our team. They both have to be ready to play. The last two seasons our No. 1 quarterback (Keenan Medley and Ramirez) has gotten hurt.”

As far as special teams, the Wonders have experience. Matt Brown returns as the punter. Nate Williams is back for PATs and short field goals. Andrew Ruiz, a soccer player, likely will handle kickoffs and long field goals.

While the Wonders scored 30 points a game a year ago, the defense allowed 24.2 ppg.

But the defense was better than it sounds. The Charlotte Catholic and Mallard Creek games skewed the stats somewhat. If you throw those two outings out, the Wonders allowed a respectable 18.5 per game.

The Wonders have to replace linebacker Kyrell Williamson, the leader of that defense, but they can build around all-star safeties Perry and Wilkes.

“The DBs may be the best group we’ve ever had here,” Newsome said.

Perry will be starting for the third year, while Wilkes will be a big safety at 6-2, 190. Corie Goss and Devin Gray probably will be the starting corners.

Gray is only 5-8, but Newsome said he’s playing “bigger than his stature.”

Upfront the Wonders should be OK. Keechan Ware (220) has enjoyed big varsity games and is the most experienced returner.

Senior Denzeal Sherer (215) is a weight-room monster, while junior Dantrell Barkley (6-3, 265) looks like defensive linemen are supposed to look. Cameron Hodges (260), a senior who has been a backup, will get his chance to shine.

The linebackers, minus Williamson, will start the season with the most to prove, but that group gets a big boost from former defensive lineman Chris Neal. Neal (205) led the Wonders in sacks last season.

Logan Miller and LB/DB Chris Hill have some experience. Cameron Rodgers, a tight end/linebacker who was injured last season, could also be an important player.

There has been some significant coaching turnover, with D-line coach Shon Galloway moving to Mallard Creek. Chip English, who coached QBs, got the head job at West Caldwell. Young coach Eric Morman, who played at Catawba not long ago, got a fulltime P.E. position at West Stanly.

The Wonders enter the season thinking 11-0 as they always do, but with their schedule, they could be really, really good and still go 7-4.

“This will be our second year in this league and I think that will help our coaches and our players as far as knowing what to expect,” Newsome said. “We’ll have to play well every Friday and we’ll have to play with chips on our shoulders.”